Visitors coming to Niš fortress and Nisville Festival will have an opportunity to see the exhibition “EU and Serbia: 15 years of partnership” set up near the Youth Stage, close to the City garden. The exhibition is a part of the celebration of 15 years of EU development aid in Serbia, organised by the Delegation of the European Union to the Republic of Serbia, the EU Info Centre in Belgrade, the EU Info Corner in Niš, in cooperation with the development programme PROGRES.

Since 2001, Serbia has benefited from more than three billion euros in grants from EU pre-accession funds. For more than a decade and a half, the EU and Serbia have implemented successful projects throughout the country, fostering development and brought benefits to the citizens in many areas, among them infrastructure, education, health and environmental protection.

The exhibition was organised in Belgrade’s Kalemegdan fortress from May 13 to June 13, as well as in Liman park in Novi Sad, from June 27 to July 4, It has now been set at Niš fortress, near the Youth Stage which was established in 2014 as one of successful EU projects, “Jazz – multicultural expression”, conducted by Nisville Foundation. 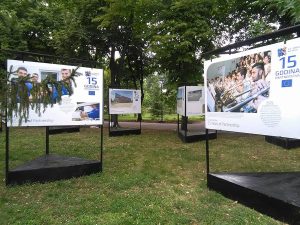 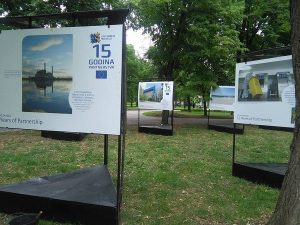 A total of 42 photos present results of mutual projects that assist Serbia to implement necessary reforms, become a full EU member and improve standards for the citizens of Serbia. The projects have been implemented in all areas and all regions. A large number of projects was implemented in southern Serbia also, mostly through the European PROGRES activities which, through financial support of the EU and the Government of Switzerland, has been supporting development of 34 local self-government in the South East and South West of Serbia.

Beside Nisville Youth Stage, some of exhibited EU projects are a construction of high-voltage power transformer station “Vranje 4”, which has provided a stable power supply for South East Serbia, as well as a construction of transmission lines Niš-Leskovac; donation of working equipment for almost 90 refugee, displaced and returnee families in Southern and Eastern Serbia; education of Roma children in Vladičin Han; a construction of a new building of Subotica Economy Faculty department in Bujanovac and many others.