Serbia has substantially benefited from trade and economic integration with the ​EU. The EU is traditionally Serbia’s key trading partner accounting for more than 60% of Serbia’s total trade in 2021, with similar percentages persisting over the years. The value of Serbia’s exports to the EU more than quadrupled from nearly EUR 3.2 billion in 2009 to just below EUR 14 billion in 2021!

Individual EU member states traditionally top the list of Serbia’s most important trade partners, notably Germany as Serbia’s number one partner in both good imports and exports, followed by Italy, Hungary and  Romania. Serbia exported almost 13% of total exports to Germany alone and another 8% to Italy in 2021. On the import side, Serbia imported more than 13% of all imports from Germany and another 8% from Italy in 2021.

Foreign direct investments (FDI) coming from the EU accounted for more than 63% of total FDI coming to Serbia from 2010 until 2021. In absolute terms, FDI from the EU countries reached a total of EUR 19.1 billion over the past twelve years.

Companies from the EU have been the leading investors in Serbia over the previous decade. These companies have brought efficiency, modern technologies and know-how into the Serbian economy, providing jobs for many Serbian people. EU companies have also brought new corporate culture and EU values into Serbia’s economy changing the way Serbian economy operates with impact on individuals and society as a whole.

This has in turn significantly increased productivity and competitiveness of the Serbian economy, boosting its export potential, increasing budget revenues and generating economic growth. Ultimately, opening up of the Serbian market to companies from the EU has generated a variety of choice and lower prices for consumers. 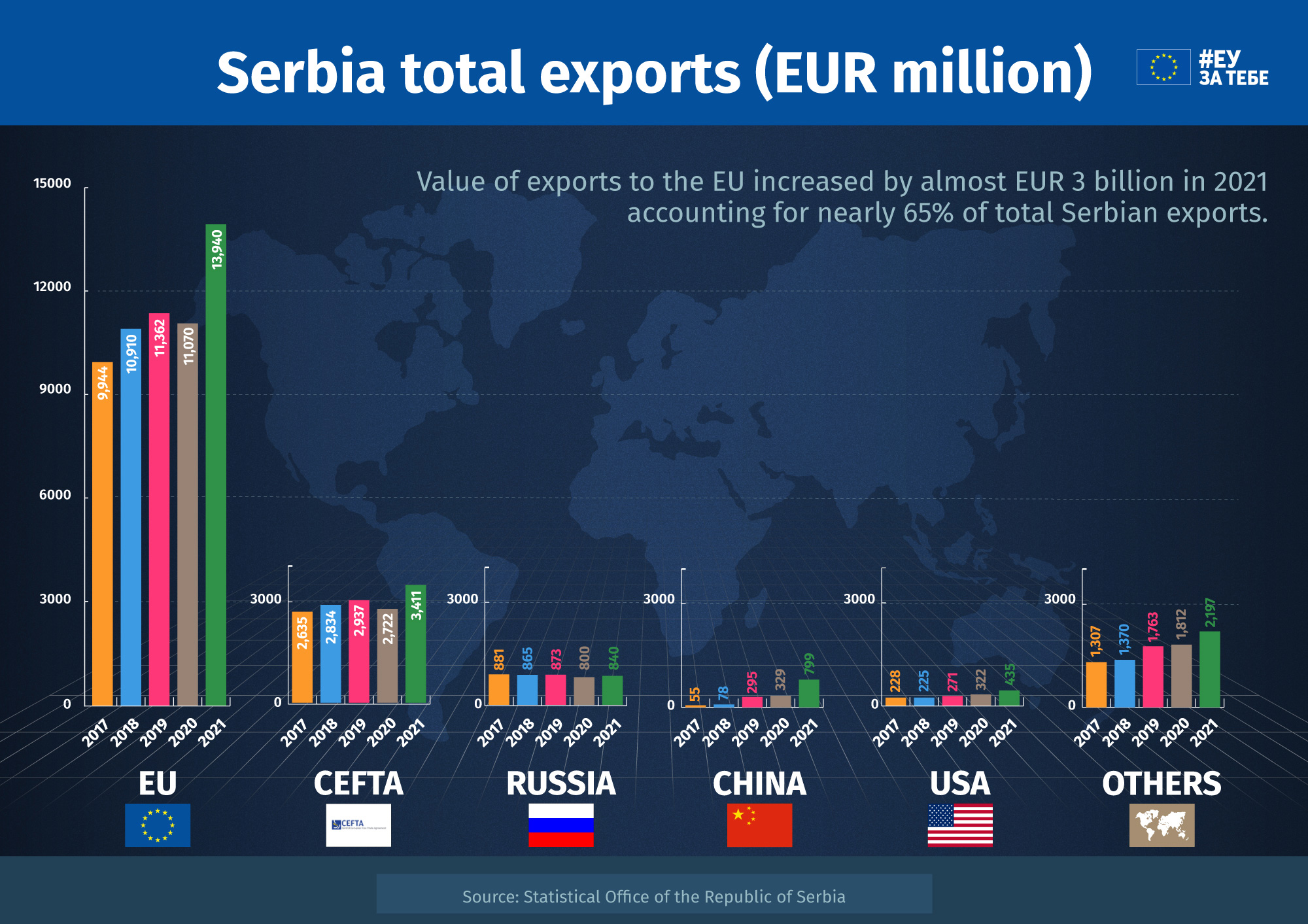 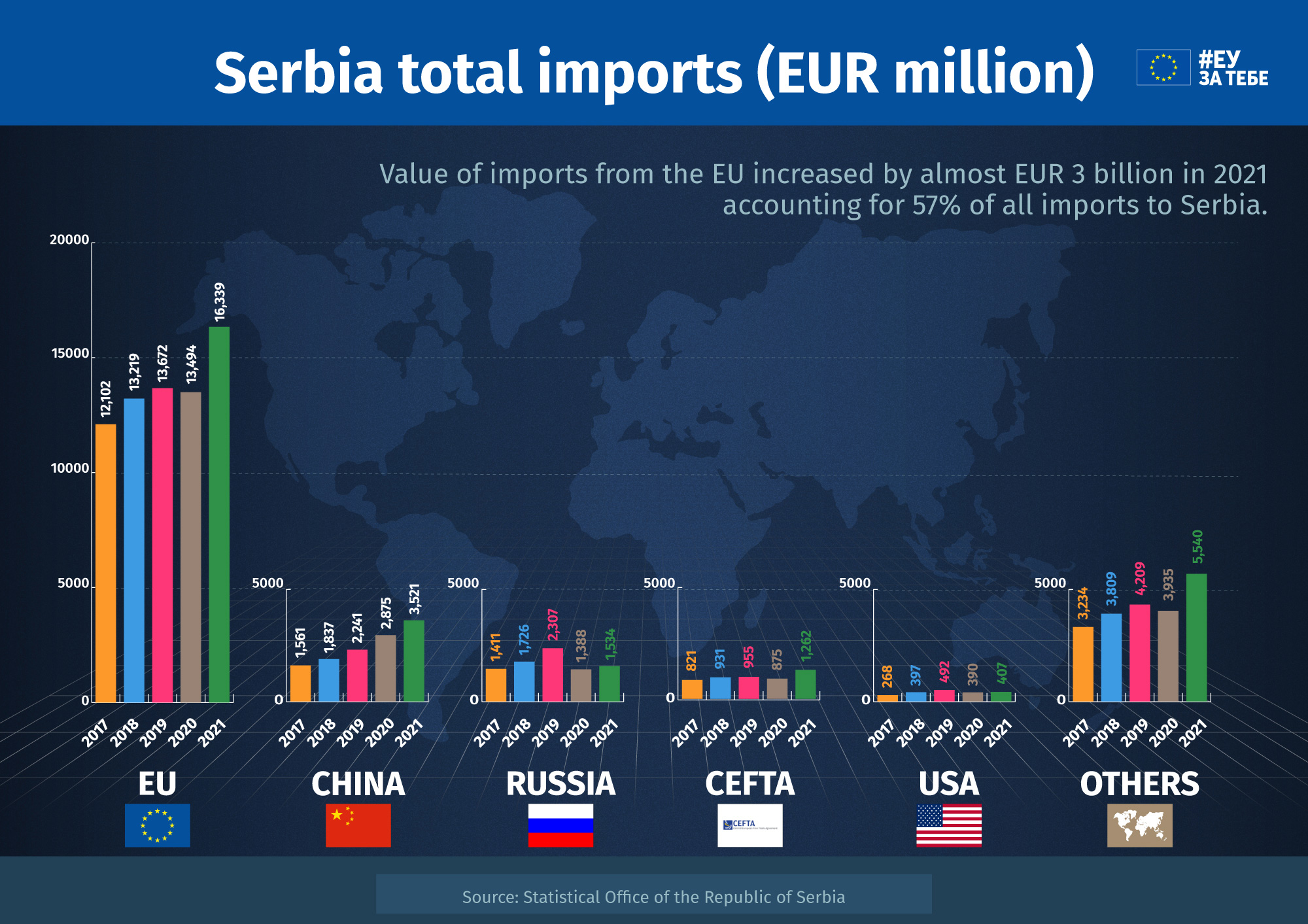 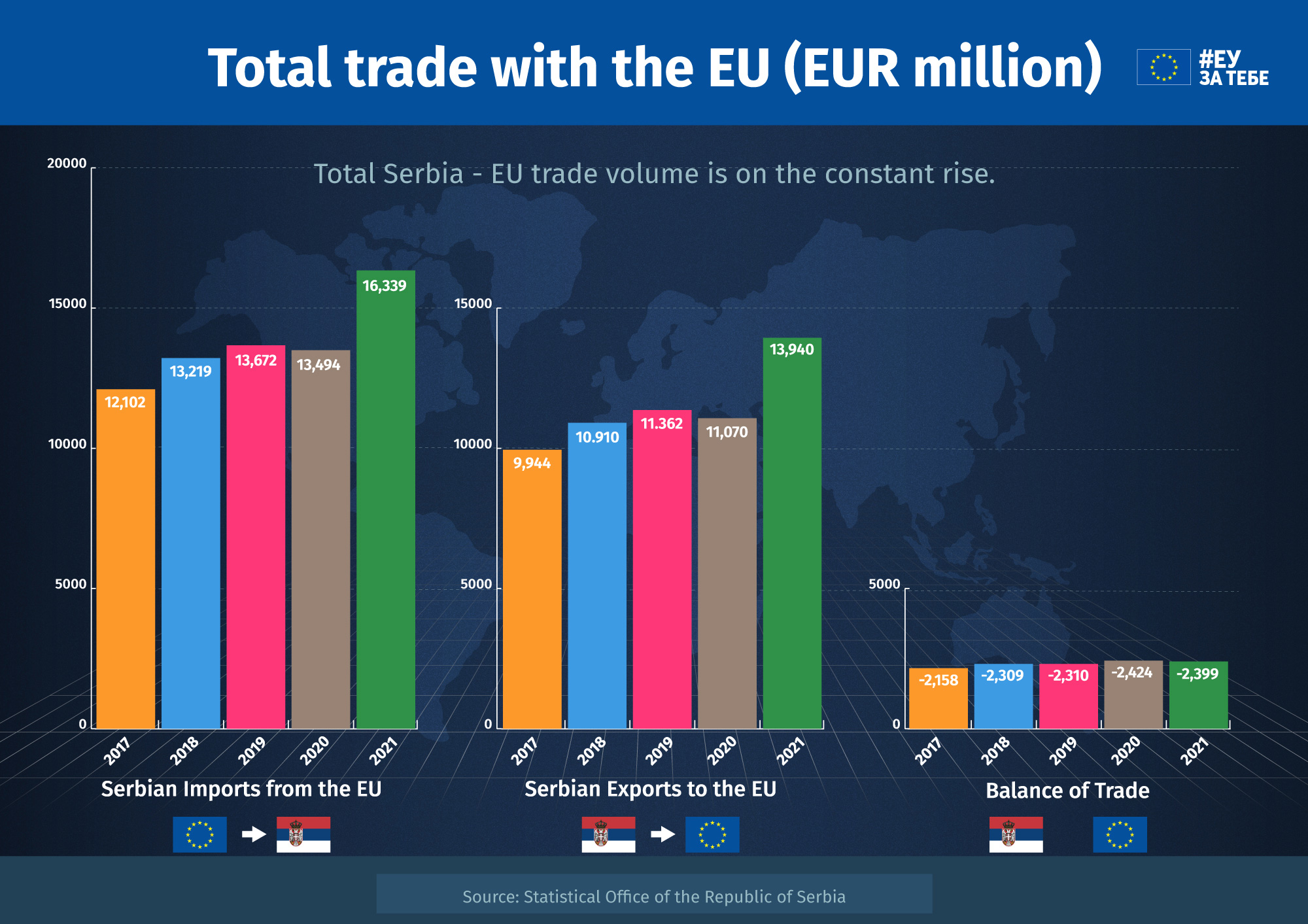 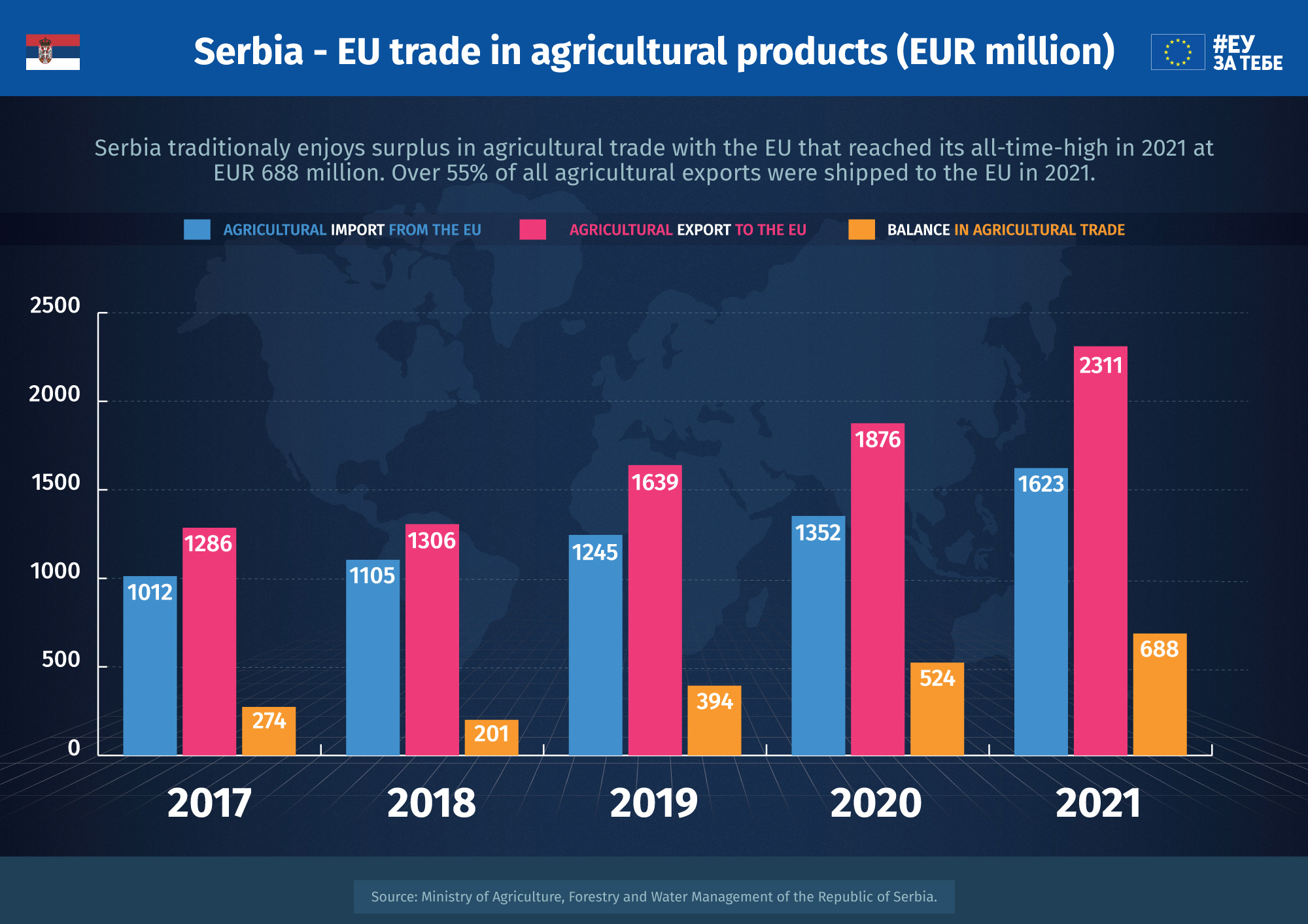 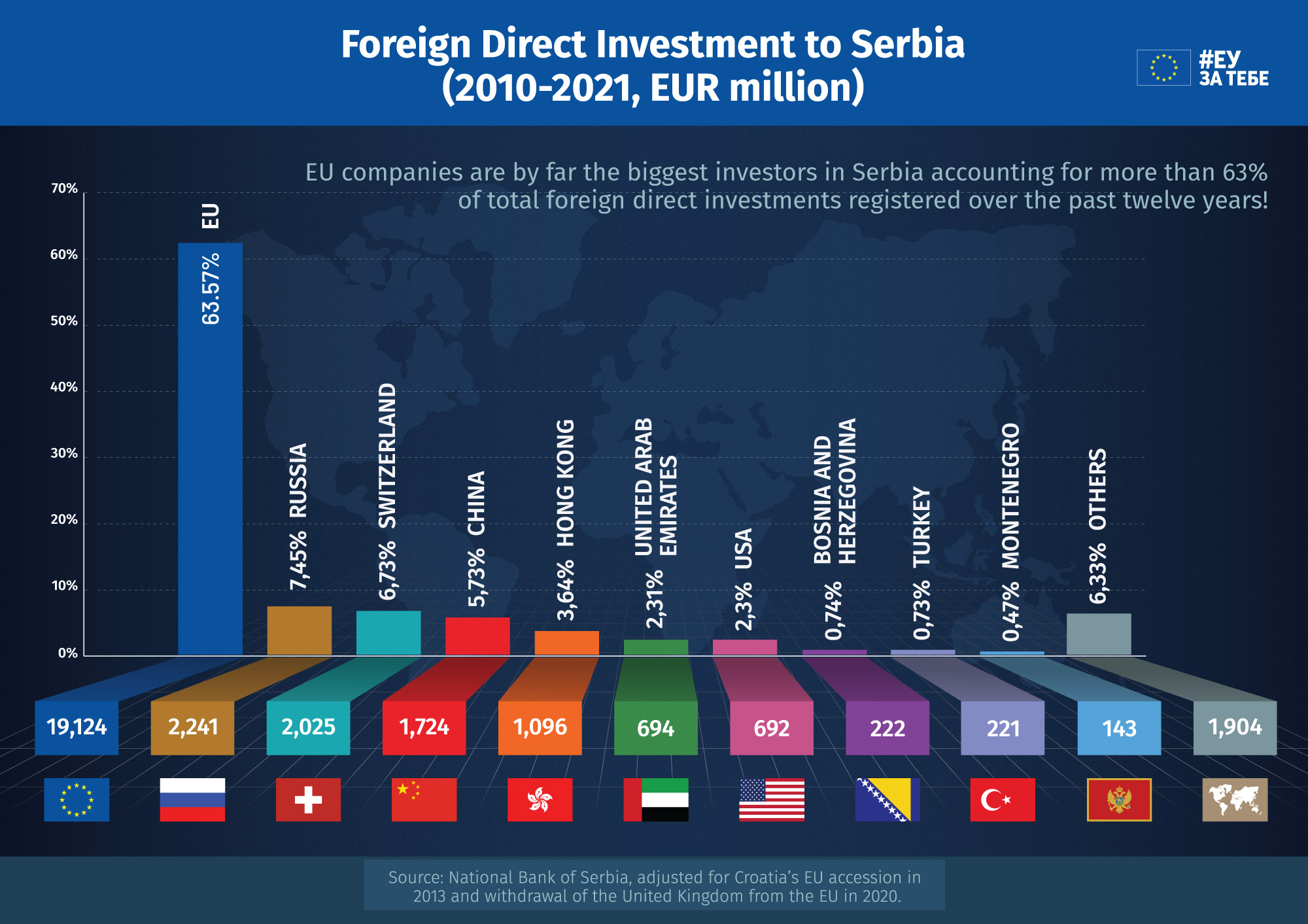 For Serbia, the reduction of import duties for goods originating in the EU started nine years later in January 2009 when Serbia voluntarily initiated the implementation of the trade-related part of the Stabilisation and Association Agreement, called the Interim Agreement. This agreement introduced asymmetric trade liberalisation in favour of Serbia for both industrial and agricultural products. In other words, since 2009, trade liberalisation on the Serbian side has been following a gradual and predictable six years’ liberalisation schedule, reflecting the level of sensitivity of products for Serbian producers.

At the same time, a level playing field was being gradually introduced through the implementation of a predictable customs regime, anti-trust, state aid rules as well as the intellectual and industrial property protection regime in Serbia. This gradual trade liberalisation schedule was supposed to enable Serbian producers to progressively prepare for growing competition from the EU.

The entry into force of the Stabilisation and Association Agreement in September 2013 further reinforced the economic benefits of the Interim Agreement. A number of new provisions contributed to improving the business environment in Serbia, including provisions related to the free movement of capital, public procurement, standardisation, rights of establishment and supply of services. These policy changes provide a clearer and safer framework for investors and businesses creating new momentum for the Serbian economy in attracting investments and improving the level playing field.

Implementation of the Stabilisation and Association Agreement has raised standards of doing business for Serbian companies, gradually preparing them to compete with the EU companies on the Single Market and increasing their competitiveness in the long run.

For Serbian citizens, this should generate more variety of choice and decrease the prices of goods. For instance, the gradual opening of the market for public tenders to EU companies should result in more competition in public procurement procedures and is supposed to consequently bring better value for money to Serbian tax payers – better public works, supplies and services with less tax payers’ money.