European Commissioner for Neighbourhood Policy and Enlargement Negotiations Johannes Hahn and Serbian Prime Minister Ana Brnabic agreed today in Belgrade that by the end of 2017 additional chapters might be opened and said that “quality goes before speed.”

“Progress has been made regarding the previously opened chapters, chapters 23 and 24 (the rule of law) in particular and I am confident that additional chapters could be opened by the year’s end. Closing the chapters, however, is another story,” Hahn told the press during the conference he held following the meeting with Ana Brnabic.

Asked to comment on the remark made by the European Commission President Jean-Clade Juncker who had said that Serbia might join the EU in 2025, Hahn said that it meant that accession negotiations could be concluded in 2023, explaining that, once the negotiations have been concluded, it usually takes some two years for a country to officially join the EU.

He said that “the opening of the first chapters resulted in an investment boom” and that companies “started rushing to Serbia,” adding that Serbia “has made good progress” but pointed out that “quality goes before speed.”

Brnabic said that Serbia was not “disheartened” by the remark that it could not join the EU before 2025 because, as she put it, the process of European integration itself was what mattered most for Serbian citizens and Serbian economy. 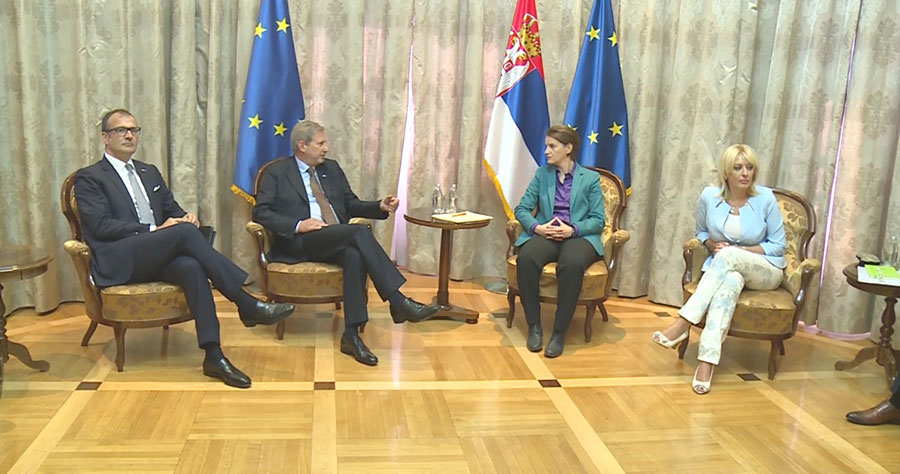 Brnabic announced that she would make her first official visit to Brussels on 10 and 11 October to discuss further steps on the European path with EU officials.

She said that Serbia remained open and committed to the dialogue with Kosovo and assessed the raising of the dialogue to presidential level with EU support as positive as it allowed the dialogue to pick up the pace and become more efficient.

“I am certain that we will be seeing the first positive results of the Brussels dialogue in terms of implementation of the previously reached agreements and negotiating new ones,” European Commissioner said.

Asked to comment on the allegations made by the Croatian Security and Intelligence Service about the security threat to European citizens and the extremism in the South-eastern European neighbourhood, Hahn said that he “is not familiar with the figures” but added that such threats do exist.

“EU Foreign Ministers have discussed cooperation with their counterparts in candidate countries. We have pre-accession funds aimed at tackling such issues. The issue of security goes beyond the EU and the region,” Hahn said and added that “it is not something that will fade away in the coming years.”

Brnabic said that it proved the importance of the Western Balkans for the EU and vice versa.

The meeting with Prime Minister Brnabic was the last one during the two-day visit to Serbia which was, as Commissioner Hahn stated himself, his tenth in this capacity.

During the visit, Hahn separately met with Serbian President Aleksandar Vucic, Prime Minister Brnabic and Foreign Affairs Minister Ivica Dacic and held a lecture “EU-Serbia: Strategic Partnership for the Future” for the members of the National Convent on the EU and Member States’ heads of missions to Serbia.

Commissioner Hahn first met with Serbian President Aleksandar Vucic. According to an official statement, Vucic told the European official that the number of negotiation chapters opened so far within Serbia-EU negotiations should reflect more precisely both the efforts and results achieved by the country.

Foreign Affairs Minister Ivica Dacic also discussed negotiation chapters with Commissioner Hahn; other topics of their meeting were the dialogue on normalisation of relations with Pristina and regional cooperation.

Commissioner Hahn paid a visit to Serbia just a few days following the European Commission President’s State of the Union address who described Serbia and Montenegro as frontrunner candidates for EU membership.