Head of the EU Delegation to Serbia Ambassador Sem Fabrizi presented in Cacak awards to authors of the best entries in the art contest for high school pupils “My European Community.“

“The European Union has supported art contests for high school pupils in the south and southwest Serbia for the past ten years, and 12 of the best entries have found their place on the calendar, although the total number of entries from across Serbia was much higher than that,” the Ambassador stressed. Congratulating Mina Lazovic, a pupil of the Technical Sciences School in Cacak who won the first prize, and Emilija Cvetkovic of Nikola Tesla Technical School from Surdulica and Elena Zajmovic of Nova Varos High School who won the second and the third prize, respectively, the Ambassador reminded that art is an element that binds us.

“The story I conveyed through my work is bigger than me; it belongs to every one of us. It’s a story that reminds us that we have to keep an open mind, accept differences and offer help when we’re bid,” winner of the contest Mina Lazovic explained.

This year’s topic of the “My European Community“ contest has led the young to think about the issues faced by their fellow citizens and their ability to help them. The jury chose 12 out of 153 entries to be featured on the EU Delegation’s 2020 calendar. The best entries can be found on EU PRO’s website: Results of the art contest “My European Community”

Olivera Kostic, Programme Manager of the EU PRO, which ran the art contest, pointed out that for her and her colleagues this is the best day of the year as they get to spend it with young people.

“This is an occasion to highlight 10 years of working together with the EU Delegation and Ministry of European Integration in implementing different development programmes through which the EU has provided EUR60 million worth of assistance in over 900 successful projects,” Olivera Kostic said.

During his visit to Cacak, Ambassador Fabrizi met with Mayor Milun Todorovic and attended a celebratory session of the City Council on the occasion of Cacak Town Day. During the session, the Head of the EU Delegation received a Recognition and Acknowledgment, stressing that the EU is the biggest foreign trade partner, investor and donor in Serbia, adding that the EU and Serbia have joined forces to build bridges, roads, hospitals and a better future for Serbia. 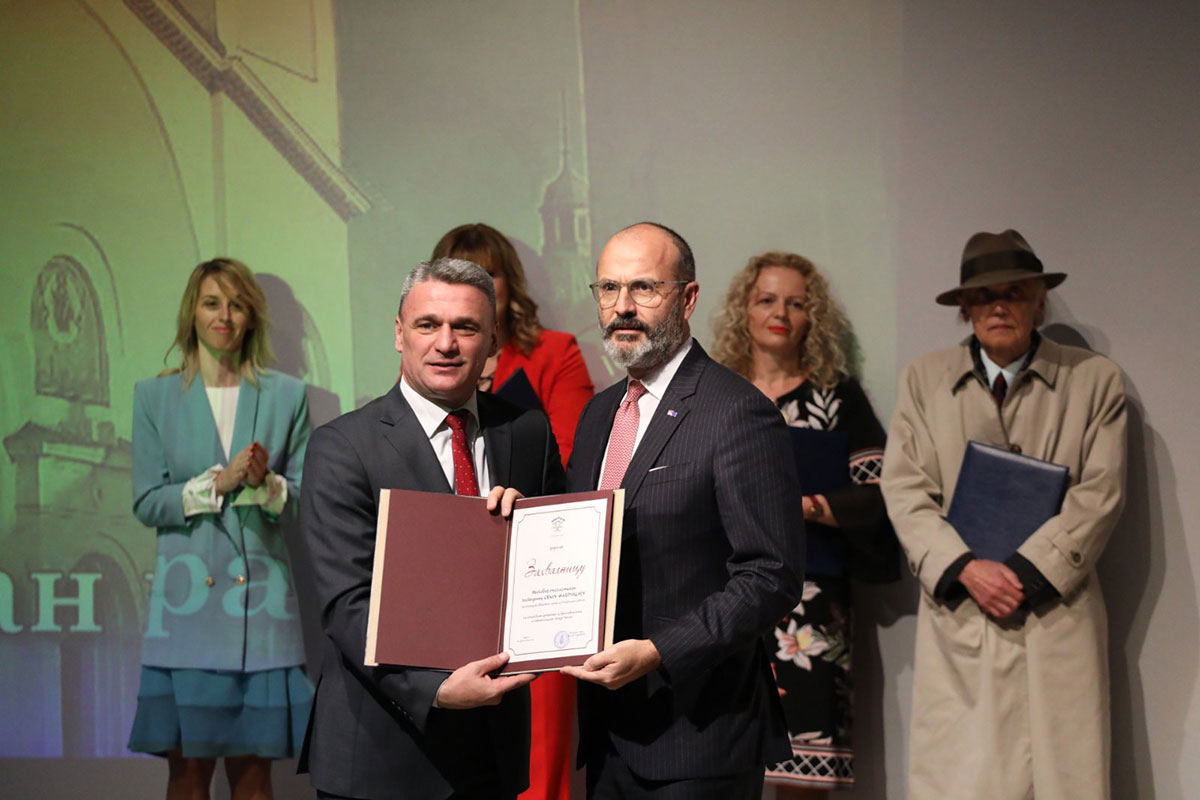 Mayor Todorovic thanked the European Union for the support it lends to Cacak in implementing numerous projects, stressing that the EU is the biggest donor to Serbia, having granted EUR3 billion in assistance.

The Head of the EU Delegation had an opportunity to visit two projects supported by the EU through EU PRO, aimed at improving the competitiveness of local economy. Ambassador Fabrizi paid a visit to the Science and Technology Park in Cacak which, together with the Faculty of Technical Sciences in Cacak, leads a project aimed at supporting small- and medium-sized enterprises in Moravica, Raska and Zlatibor districts to kick off the digitization process and improve their efficiency and competitiveness. The last stop during the Ambassador’s visit to Cacak was Plazmateh enterprise which had received a grant for the purchase of new equipment it has used to improve its production processes and create new jobs.