Belgrade is getting an intermodal terminal that will boost development of a modern combined transport of goods by increasing participation of railway and creating a partnership relationship with the road transport. This way railway becomes more competitive on the market, while following all future trends in transport through the use of modern technologies.

Ceremonial laying of the corner stone has marked the beginning of works on construction of the intermodal terminal in Batajnica, and also the official launch of the connectivity campaign. This event was attended by the Serbian President Aleksandar Vucic, Minister for European Integration Jadranka Joksimovic and Head of the EU Delegation to Serbia Ambassador Sam Fabrizi. 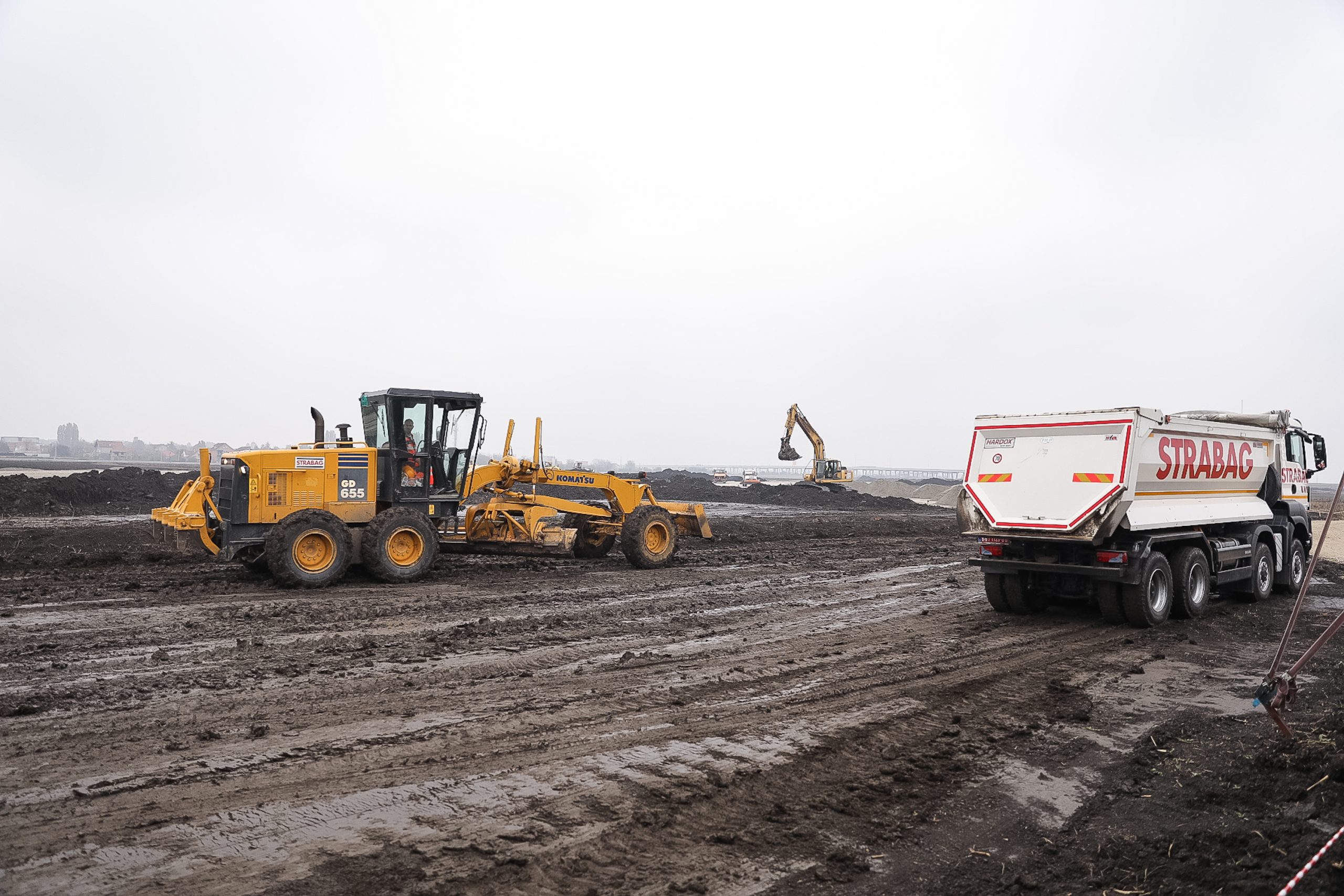 The President of Serbia, Aleksandar Vučić, thanked the European Union and the member states for the funds that will enable the construction of this facility.

This will mean a lot to Serbia. There will be a kind of more comprehensive logistics centre here, where it will be possible to reload goods from trucks to trains, the so-called “dry port”. Vienna has three such terminals, and there are over a hundred in the whole of Germany. That is a condition without which we cannot move forward, primarily because of work, because of the profit difference for companies, but also because of the lower price for ordinary people, for regular consumers. Serbia, something that we signed and accepted at the recently held Sofia Summit “, says the President of Serbia. 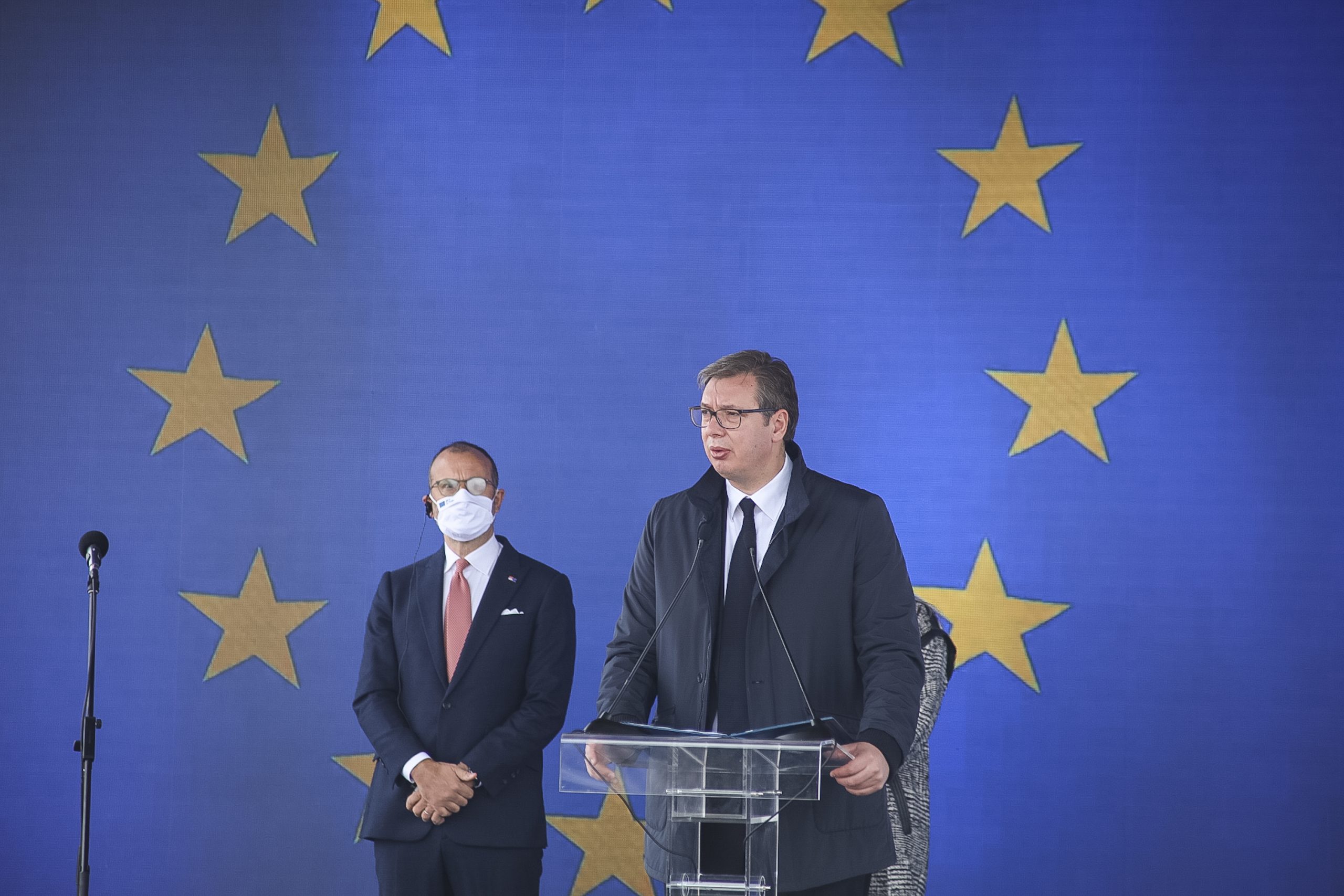 This terminal will increase current capacities of the combined transport in Serbia 8 times, it is located in Batajnica industrial zone, and the total investment amounts to 15.5 million EUR, of which the EU finances 90% of these works through a grant, while the remaining amount is funded by the Republic of Serbia.

“The year of 2020 will be remembered by the COVID pandemic, but at the same time by our additional efforts to provide substantial support to the economy. Connecting markets for a faster and safer circulation of people and goods, implementation of investments and service provision, and improvement of economy – this is the key element the EU is founded on. In 2015, EU allocated one billion euros for the connectivity agenda so as to help accelerate construction of modern transport and energy connections between Western Balkans and EU. I am happy to see that five years later Serbia is one of the biggest recipients of EU connectivity funds for the region, with over 200 million euros in grants for six investment projects. Construction of this intermodal terminal in Batajnica is one of these projects, along with the Modernization  of Nis –Brestovac railway line (45 M euro),  the construction of Nis – Plocnik highway (phase 1 of Peace highway for 40 M euro); the modernization of railway line Nis – Dimitrovgrad (74 M euro); the Rehabilitation of Djerdap Lock I (11.4 M euro) and the rehabilitation of Djerdap Lock II (17 M euro). It is an important part of the Connectivity Agenda and an example of a good synergy between EU, and national and local authorities. The new terminal will connect the infrastructure of road and railway transport and facilitate the use of railway as an environmentally acceptable means of transport. By improving transport connectivity we practically improve social and economic standards of the citizens”, Ambassador Sem Fabrizi concluded. 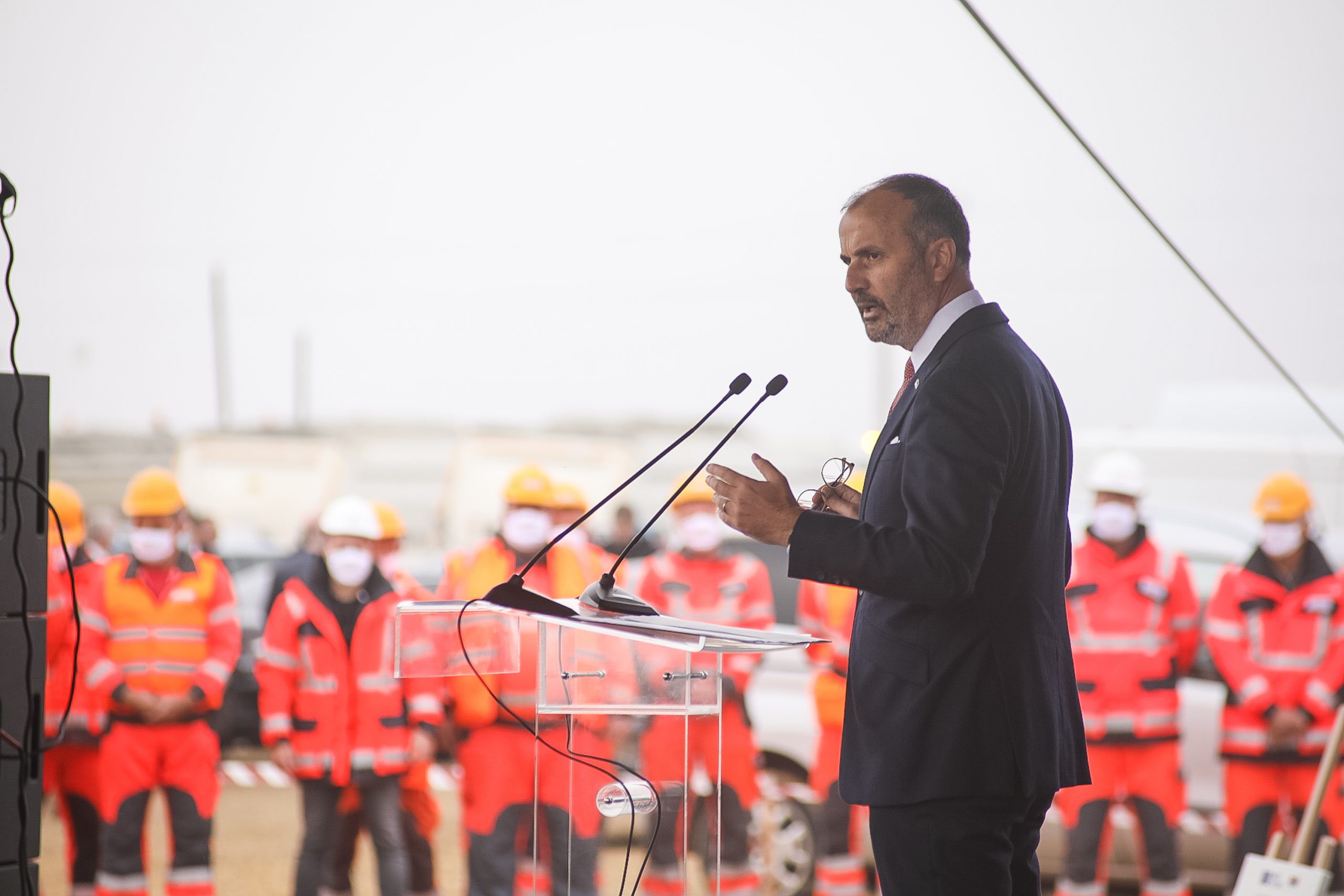 Today’s event also marks the launch of a connectivity campaign, which is carried out by the European Union in Serbia in cooperation with the Ministry of European Integration.

“The partnership between Serbia and the EU is visible at every step through numerous projects realized with EU funds in different parts of Serbia and different areas. This is a step forward in Serbia’s European path because as important as the clusters of chapters are, the funds from the EU that we use responsibly are also necessary to develop further Serbia, business infrastructure, which are also important for EU companies. It is through the project of construction of the Inter-modal terminal in Batajnica that the connection of road and railway traffic is enabled. Also, this project has an impact not only on transport but also on air quality, ie the quality of the environment in Belgrade, because it contributes to reducing greenhouse gas emissions due to reducing the presence of heavy transport vehicles on our streets,” said Minister for European Integration and National IPA Coordinator Jadranka Joksimović.

Combined transport should contribute to achieving the following: a reliable, predictable, faster and cheaper transport services; further liberalisation of the railway market; development of the infrastructure for intermodality, with capacities for interoperability; improved perception of the transport policy and focus on good quality data. 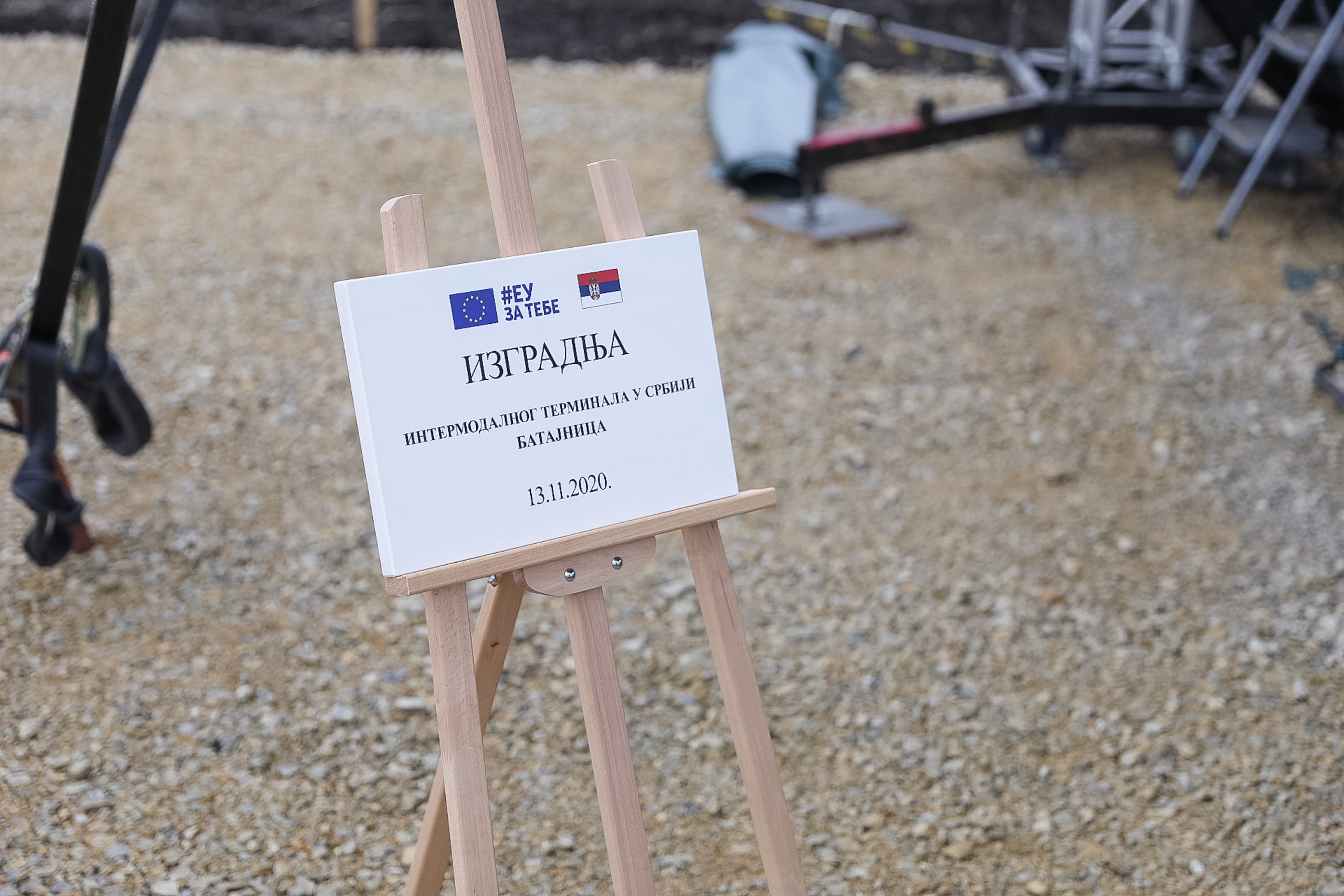 Having recognised the advantages of improved connectivity, the European Union earmarked in 2015 one billion euros in grants by 2020 within the Connectivity Agenda for the purpose of a faster construction of modern transport and energy flows that connect the EU. Serbia is one of the biggest recipients of EU connectivity funds in the region and so far over 203 million euros of grants have been provided for specific investment projects. These funds will help build modern networks of road and railway traffic that links Belgrade with other capitals of the Western Balkans and neighbouring EU countries, thus creating opportunities for economic growth, jobs, safer and faster transport and trade flows with the European Union. 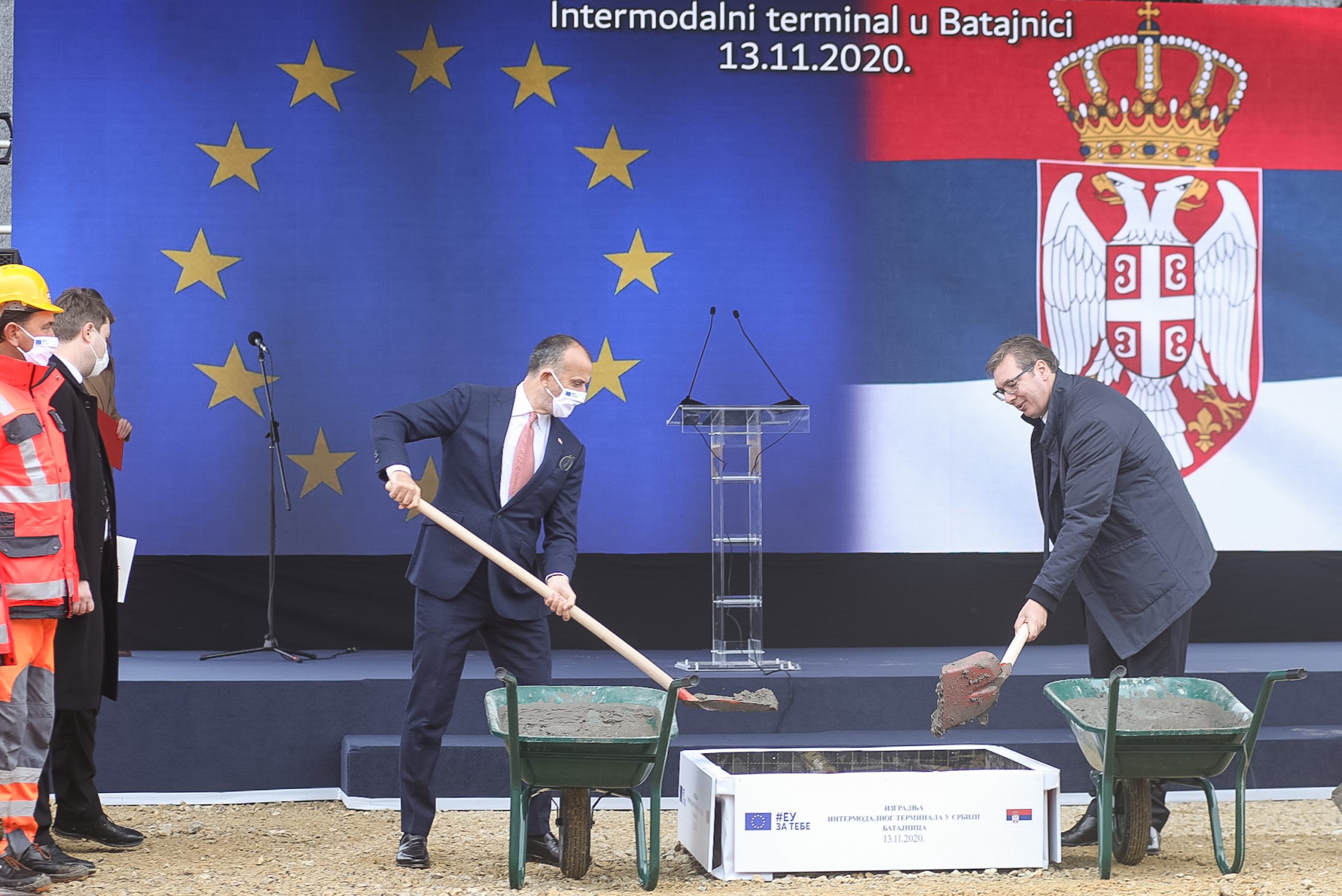 The intermodal terminal project includes works, supervision of construction, procurement of equipment and technical assistance to the terminal operator. The works include construction of access roads and railroads, warehouse and manoeuvring area and an administrative facility with a parking lot for freight vehicles.