In his first visit to Serbia as the European Commissioner for European Neighbourhood Policy and Enlargement Negotiations, Johannes Hahn said his goal was to prepare the country for full EU membership, “not only to transpose the acquies into the national regulation” but “to push and promote its economy” and implement the laws. Serbia should see the European Commission as its partner, Hahn said, vowing to work hard towards “the final goal that Serbia joins the EU as soon as possible.”

“I’m here to reassure the Serbian people, the Prime Minister, the government that the European Commission, the European family, I personally should be seen as partner in this process to bring Serbia in the European Union,” Hahn told reporters after meeting Prime Minister Aleksandar Vucic.

“This is something I personally will work hard in the next couple of years and you can be sure that i’ll be in Belgrade very often to have personal discussions with colleagues in order to make the necessary progress, to have the negotiations and to have the final goal that Serbia will join the Union as soon as possible,” he said.

“There is clearly an added value for Serbia, for Serbian peeople to become member of the EU in order the welfare level, to have simply more money in your pockets,” he said, adding that he would “organise investors conferences here in Serbia in order to attract further foreign investors to Serbia, creating jobs, pushing the economy.” 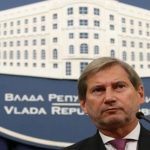 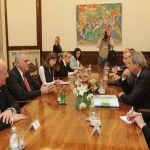 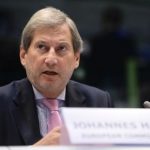 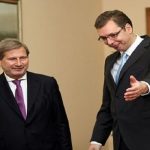 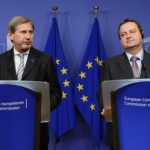 Asked if he can say when Serbia could open first negotiation chapter, Hahn said that the EU had a strong interest to open first chapters 23 and 24 dealing with rule of law and transparency.

“There are also some other chapters like 31, 32 dealing with financial issues, so i’m pretty sure that in the next couple of weeks, months we can open one or the other chapter but you should be aware that we have already started negotiatins, we don’t waste any time. For me the more important is how we use our time,” Hahn said.

“It’s not if we this month, next month or in three months open this or that chapter, we work together very hard, we negotiate but the overall objective is to bring Serbia to the European Union, to prepare everything and preparing Serbia to the EU is also when it comes to the economic development of the country to be a full member of the European family from the day one of its accession whenever it will be, but I am sure we can do a significant progress over the next five years,” the Commissioner said.

Vucic reaffirmed that Serbia has been on the European path: “that is our strategic goal and that is a type of society we chose.”

“We expect from Hahn help and support, we have had from him after the floods and I am confident that we will have in the future too. He is a friend of our country and I believe that we will have a good cooperation,” Vucic said.

“Serbia is a pillar on stability in the region, but this also concernes their attitude towards negotiations with the EU, also in that respect Serbia is a role model for others in the region,” Hahn said.

At the beginning of his visit, Hahn met with Minister of Justice Nikola Selakovic and later talked with President Tomislav Nikolic, parliamentary speaker Maja Gojkovic, Minister of Foreign Affairs Ivica Dacic and Minister without portfolio in charge with European integration Jadranka Joksimovic.