During a two-day visit to South Serbia, the Head of the EU Delegation to Serbia Sem Fabrizi visited Bosilgrad, Presevo, Vranja and Bujanovca where he was informed about EU-funded projects.

In Bosilegrad, together with the Commissioner for Refugees and Migration, he opened a renovated part of the Reception Centre for migrants. Reconstruction works in the amount of € 465,000 were completed as part of EU support to migration management in the Republic of Serbia. 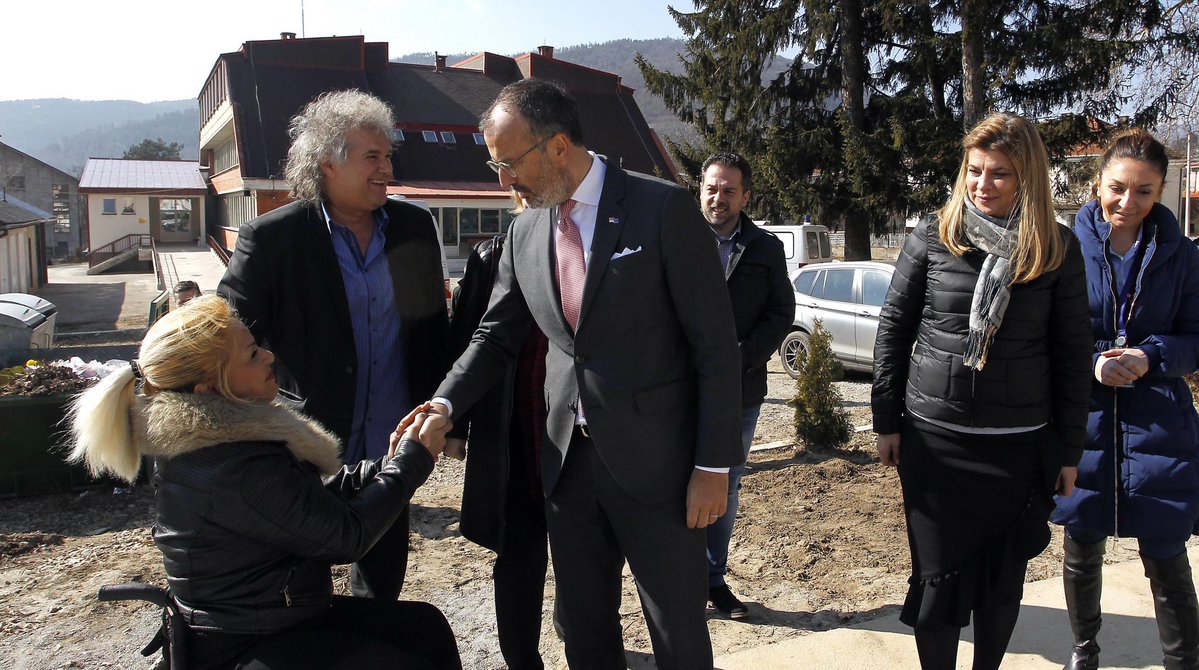 Fabrizi: The EU has donated approximatly 100 million Euros to solve the migration crisis in Serbia

At the opening ceremony it was pointed out that the renovation expanded the capacity of the refugee centre in Bosilgrad from 67 to 110 beds, and that the migrants who are staying there now have available a modern equipped outpatient clinic, distribution kitchen with a dining room and recreational sports ground.

As part of the reconstruction works of the building a video surveillance system was installed and the courtyard was refurbished.

The Head of the Delegation of the European Union to Serbia Sem Fabrizi stated that the Reception Centre in Bosilegrad was given a new life thanks to the cooperation of numerous international partners and local self-governments, through a donation from the European Union.

“The European Union and Serbia have worked together for years to provide dignified conditions for the lives of migrants. This is one of many reception centres opened in Serbia,” said Fabrizi.

He pointed out that since 2015, the European Union has donated to Serbia approximately EUR 100 million towards solving the migrant crisis.

“The European Union highly appreciates everything that Serbia has done to help migrants, and they now live together with the local population. Here at the reception centre we have come across many smiling people, which is very important,” stated Fabrizi.

According to him, migration is a challenge that we will encounter in the future, and the European Union’s policy is to help those who deserve a warm welcome. 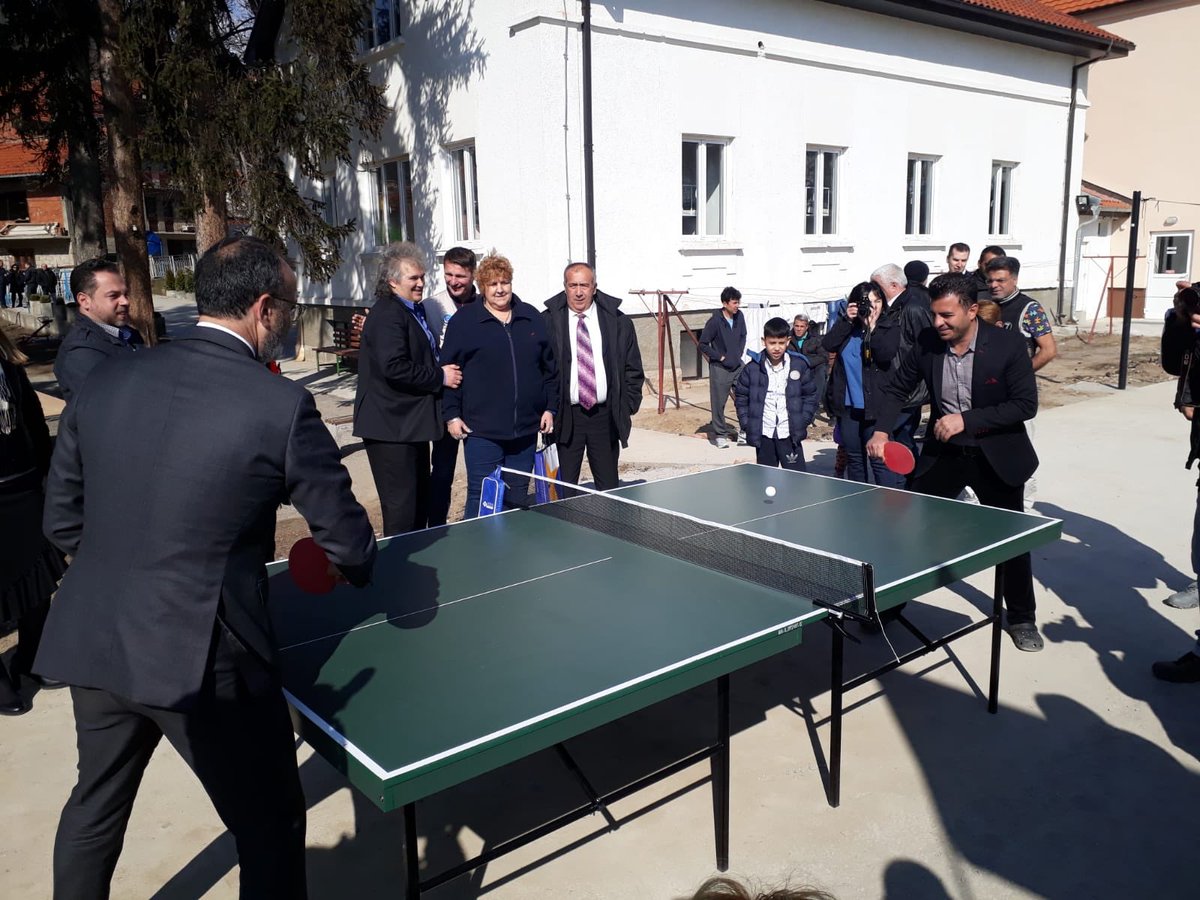 Cucic: EU practically the only donor for migrants in Serbia

The Commissioner for Refugees and Migration Vladimir Cucic pointed out that the reconstructed facility was once a hospital, but over the past 30 years it has been abandoned, ruined, and without a roof.

“When migrants leave Bosilegrad, the facility will remain part of the Bosilegrad municipality to be used for any purpose that is designated for the premises. The same will happen to the children’s hospital in Principovac, and with the schools in Tutin, Sombor and Pirot. These 19 reception centres across Serbia will be of utmost benefit to the local community,” said Cicic.

He said that there exists no immanent need to expand the network of reception centres in Serbia because they collectively have a capacity for 6,000 people, while presently they accommodate between 4,100 to 4,200 people.

According to him, in accommodating migrants extensive support to Serbia is being provided by the European Union, which is now practically the only donor.

“The European Union continues through multiple projects and various partners to support not only the accommodation of migrants, but all other ancillary services that are necessary for their stay, including access to health care and the education system. Children go to school, various social events and activities are organized, all of which is financed by the European Union,” emphasized Markovic.

President of the Municipality of Bosilegrad Vladimir Zahariev said that migrants are welcome to Bosilegrad and that the municipality is ready, if necessary, to accept an even greater number of migrants.

There are currently 70 migrants accommodated in the Reception Centre in Bosilegrad, mostly families from Iran and Afghanistan.

“The European Union provides support to micro and small enterprises that account for 90 percent of all enterprises, which represent pillars of the economy in Serbia as well as in EU countries,” said the Ambassador and Head of the Delegation of the European Union to Serbia Sem Fabrizi when delivering the grant agreements to the first group of 38 out of a total of 106 companies from the south of Serbia whose projects were approved through the EU PRO program. Companies awarded with contracts are from Zajecar, Jablanica, Nisava, Pirot, Pcinja and Toplica districts

“By supporting your companies we show that good ideas will always receive support, and that you yourselves must create the future, lead your businesses and employ new workers. The European Union is here to help you through the EU PRO program to realize your ideas and turn them into business opportunities,” told the Head of the EU Delegation to entrepreneurs, adding that the European Union will continue to help this part of the country through its political, financial and social assistance instruments.

The European Union has provided more than two million euros of support to micro and small companies based in southeast and southwest Serbia bearing in mind that they are key to achieving economic growth and job creation. Enterprises, primarily engaged in the production of food, furniture, textile and clothing, wood and metal processing, will receive new equipment to increase their production and product quality and, already in the first year, they will employ 255 people, which represents an increase of 25 percent in comparison to the current number of employees.

Head of the United Nations Office for Project Services (UNOPS) in Serbia Mikela Telatin, who is overseeing the implementation of the EU PRO program, told awarded companies that it is important to serve as good examples in their communities and promote positive change that contributes to a better life for all citizens.

“Through the implementation of the EU PRO program, UNOPS will create synergies by promoting entrepreneurship, developing local and economic infrastructure and social cohesion, and improving the quality of life of the local population. This is also the mandate of UNOPS – to support people to create a better life and achieve sustainable development within countries,” said Mikel Telatin.

The call was conducted in cooperation with the Ministry of European Integration, Ministry of Economy, Development Agency of Serbia, regional development agencies and chambers of commerce, and significant support was provided by local governments involved in the implementation of the EU PRO program.

“These incentives provided by the European Union contribute to efforts of local self-governments to further municipal development, and I am pleased that five companies from Bujanovac and one from Preševo received support,” said Bujanovac Mayor Shaip Kamberi.

Earlier in the day in Vranje, the Head of the EU Delegation, Ambassador Sem Fabrizi, together with Mayor Slobodan Milenkovic, visited the new building of the surgical block whose reconstruction was supported by the EU.

“This project was really important given the fact that Vranje represents a regional health centre that provides healthcare services for more than 250,000 inhabitants,” said Ambassador Fabrizi, adding that the surgical unit has now brought Vranje’s health care system into the 21st century.

“Thanks to the funds of the European Union, the Serbian Government and the local self-government, the City of Vranje and Pcinjski district, as well as insured people from the Kosovo-Pomoravlje district, now have a new, modern surgical block, and healthcare workers have excellent working conditions,” stated the Mayor of Vranje Slobodan Milenkovic.

The Mayor expressed hope that in the coming period, with support from the Serbian Government, based on the project-technical documentation that was completed with EU funds, the old part of the hospital will be reconstructed, thereby obtaining a functional complex between the stationary part of the hospital and the surgical unit, which covers approximately 6,000 square meters, has eight operating rooms, and an intensive care unit that provides emergency services.

“In all parts of the country, there exists a need for good coordination between central and local levels of government, the private sector and civil society, which must work together on the social and economic development of the country. And I hope that this joint effort will soon bring Serbia into EU membership,” concluded Ambassador Fabrizi.

During his visit to the south of Serbia, EU Ambassador Sem Fabrizi met with the Mayor of Bujanovac Shaip Kamberi, the President of the National Council of the Albanian National Minority, Ragmi Mustafa, and held a meeting with Zoran Stankovic, President of the Coordination Body of the Government of the Republic of Serbia for the Municipalities of Presevo, Bujanovac and Medvedja.