Inmates of the “Grey House” in Krusevac have only one message – a happy ending is possible, and we create it ourselves.

After undergoing creative workshops, “rewriting” Greek myths, and painting murals, the inmates of the Juvenile Detention Centre in Krusevac say that happy endings are possible and that they can create them for themselves. They were convinced of this when, in the course of creative workshops, they created alternate endings to myths, changing the tragic endings to more uplifting ones. Marina Kovacevic, Director of the Centre for rehabilitation through imagination (CRI) and PhD student of the Faculty of Dramatic Arts, worked with the inmates on this project. The inmates played Zeus, Hades, Orpheus, Eurydice, Ares, altering the characters, and re-creating outcomes with a message of self betterment, in a process also learning valuable life lessons.

– The theatre play with the inmates of the Juvenile Detention Centre in Kruševac “Of Gods, Heroes and Other Knights” was written during creative writing workshops and performed at the Belgrade Youth Centre. The inmates had a chance to verbalise their feelings, write poetry, learn about Greek myths, and select the most interesting ones to study and work on. They played gods like Zeus, Hades, Orpheus, Eurydice, and Ares and created ends that are not tragic like the original ones. The creative writing workshops offered them the opportunity to express their imagination and feelings, to impact the myths through creating different ends with the message on how to resolve the conflict between good and evil. Apart from playing through acting, they also changed the main characters, learned about life, changed tragic outcomes – a message for their own lives – that a happy ending is possible and that we create it ourselves. There were also workshops for mural and graffiti painting at the Centre, as well as workshops for working with dogs from the “Šapa spasa” Animal Shelter belonging to this facility – says Kovačević for “Politika”. 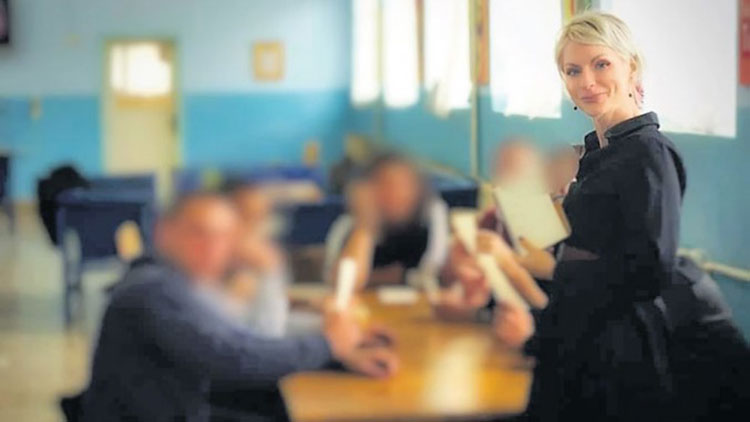 Kovacevic presented everything she has done with the Juvenile Detention Centre inmates in the documentary “What Haрpened with That Little Girl”, which is expected to have its premiere soon. The idea of the documentary is to introduce the public to these innovative methods of working with the vulnerable juvenile prison population such as the one in Krusevaс.

– We have changed the image of the “Grey House”, which stopped being grey a long time ago. The inmates, together with the artist Bojan Vuković, painted murals with nature motifs on the walls of the Cultural Centre in this institution, with the unconditional and superb support of the Treatment Department of this institution. Juveniles in the Centre work with dogs, training them, too. It is one of the most successful examples of a penological model of convict rehabilitation in the world. This was introduced from the Prison and Correctional Facility in Sremska Mitrovica to the Juvenile Detention Centre in Krusevac, with the approval and support of the Ministry of Justice, Administration for the Enforcement of Penal Sanctions. I would like to thank the Administration for the Enforcement of Penal Sanctions, Ministry of Justice, OSCE Mission, the EU Delegation and German NGO Help for their support and activities on the implementation of these ideas and programme promotion – says Marina Kovacevic.

Аccording to Marina Kovacevic, the creative writing programme and painting workshops have had excellent results, and there is an interest in bringing murals, graffiti and arts related programmes to other prison and correctional facilities in Serbia.

The Juvenile Detention Centre production of “Of Gods, Heroes and Other Knights” is not thе only play that Marina Kovacevic has produced with inmates in the criminal justice system in Serbia. She produced the play “Notes from a Cell No.12” (based on the Dostoyevskу’s “Notes from the Underground”) with the inmates from the Belgrade County Jail. She has also produced “Her Story”, “Alan Ford”, and many other projects with the inmates of the women’s prison.  “Notes from a Cell No. 12” was performed 17 times in the largest correctional facilities in Serbia, as well as for the general public at the Belgrade Youth Centre.

The documentary based on the motifs from the play premiered at the international conference in New York in September 2016. After the premiere, the documentary toured American prisons, and during 2017 and 2018, we presented it at federal prisons in Michigan, Kentucky and San Quentin, as a pаrt of the rehabilitation programme for American inmates. I am very proud of that. Apart frот promoting successful modes of work and treatment in Serbian prisons, I was also involved in implementing successful programmes in federal prisons in San Quentin and Kentucky. One of them is the re-socialization of inmates with the assistance of dogs, which is one of the best global penological programmes in the develорed societies. It is implemented in only a few American prisons, like the ones in San Quentin, California, and only three prisons in Europe, one of which is the Prison and Correctional Facility Sremska Mitrovica. The most interesting thing is that the Facility in Sremska Mitrоvica is definitely the only one in the world with a dog shelter within a prison, and with a creative writing programme related to this topic. Respect for human rights here is at the same level as in the American prisons. They have a stricter hierarchy of punishments, and we have a more humane approach – wraps up Kovacevic.

The European Union has supported the reform of the prison system in Serbia for over a decade.  The support has been put in place to help the Serbian Prison Administration provide higher standards in the treatment, security and care of the inmates, while also ensuring that criminal sanctions are enforced.  The Probation services are an important part of the penal system as they are responsible for overseeing alternative criminal sanctions, such as house arrest. But they also deal with support to those who have served their sentence and have left prison but need help to find work, a place to live or the right healthcare.

In the last four years alone, the EU has invested 5,321,000 EUR in Serbia for prison reform.  Such support has included :