Following the signature, Hahn described the agreement as an important investment which would contribute to European integration process of Serbia.

He stressed that the Agreement was about non-refundable aid and not a loan.

Joksimovic said that EU money would be spent in a transparent manner as it had been the case thus far.

“The European Union is by far the biggest donor in Serbia, with over EUR3 billion in non-refundable aid in the last 15 years,” Joksimovic said. 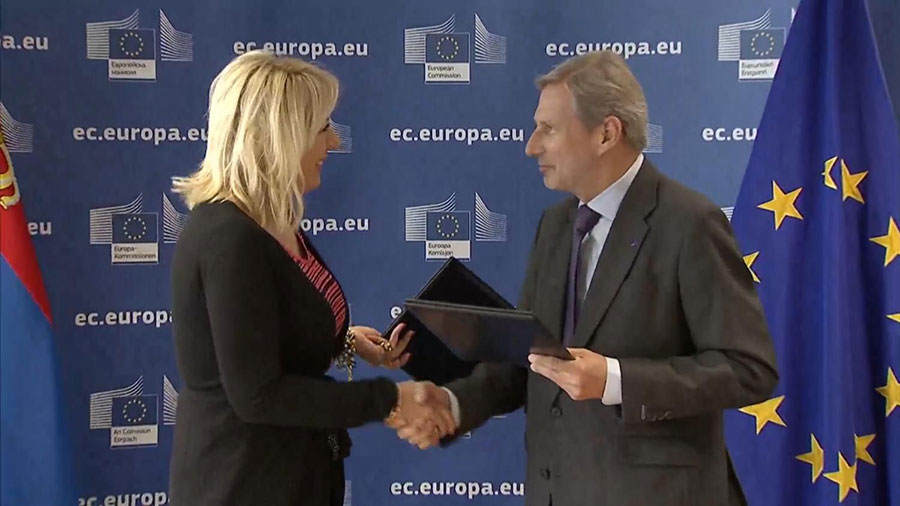 The first part of the financing agreement IPA2016 for Serbia, which was signed in Brussels on 6 June, amounts to 95,1 million EUR out of a total of 166,4 million EUR (57% of the total agreement). This share of the funds will be implemented by the EU Delegation to Serbia on behalf of the Republic of Serbia.

An important priority will be to boost competitiveness in Serbia, and for the first time such a large sum of EU funds has been dedicated for this purpose in one financing agreement.

23,7 million EUR have been allocated for projects aiming to support small and middle-sized enterprises in Serbia. This will include providing advisory services to improve efficiency and helping small and medium sized companies to get easier access to financing. The funds will help to bridge the gap that now exists in the offer of financial services to such enterprises and to provide them with free of charge advise on their business development.

An additional programme to foster competitiveness and job creation at the local level, worth 25 million EUR, will focus on supporting the smallest enterprises such as family companies or start-ups. Such companies will benefit from advisory services, grant-funding and support to infrastructure development. The programme should help boost private business ideas and initiatives and generate jobs at the local level.

A programme called the European integration facility worth 35,8 million EUR will support Serbia in key areas related to the EU accession. More than 40 institutions and millions of citizens will benefit from this programme in sectors such as gender equality, Roma integration, support for internally displaced people, support to the sectors of transport and environment, improving statistical reporting in Serbia etc.

Support to internally displaced people and social inclusion at the local level continues to be in focus of EU funding. The aim is to provide free legal aid for internally displaced people covering some 2000 legal cases. The good practice of mobile units to help foster Roma integration, which was established with EU support in 2013, will continue and mobile unit teams will be established in an additional 50 municipalities across Serbia. The teams are composed of social workers and health consultants who provide support in all areas of integration including education support for young Roma and their families.

EU funds will also help improve the efficiency of the Serbian electricity system in line with EU requirements in energy policy. For citizens, this means more stability of the electricity supply including for example a decrease of power outages.

EU actions are always targeted at the wellbeing of citizens which is why funds have been dedicated to help the adoption of the Strategy on management of stray dog population.

When it comes to improving road safety, a project will be implemented to increase data exchange among medical institutions, the traffic police and the Road Traffic Safety Agency in order to improve the efficiency of the system and help to save lives.

Assistance to the Statistical Office of the Republic of Serbia will continue to enable the Office to achieve around 90% compliance with Eurostat standards in areas such as national accounts, business statistics and harmonisation in agriculture statistics.

On a strategic level, the programme will support national institutions to help them develop up to 6 major infrastructure projects. Well prepared projects of this kind will be able to benefit from EU pre-accession funds as well as from structural funds once Serbia becomes a full member of the EU.

Providing fair and efficient justice for citizens is at the core of European integration, which is why funds have been allocated to support the Court of Cassation as well as the High Judicial Council to deliver services more efficiently.

Improving the quality of life for people with disabilities is an important objective to which 3.5 million EUR will be directed from this programme. Works will be carried out in municipalities across Serbia to improve access for persons with disabilities to municipal buildings such as courts, schools, city halls. Up to 90 such buildings will be refurbished with accessibility options (elevators, ramps…) thereby considerably helping local communities and its disabled citizens.

To be able to finish the ongoing reconstruction of the Golubac fortress, the EU has set aside another 2 million EUR to finalise the works on the fortress, which will enable the Golubac fortress to increase its offer of services for tourists as well as create new jobs for the local population.

Other parts of the IPA2016 financing agreement will be signed later during the year: