This year 2020 was a year of solidarity for the European Union, both internally and externally, and we started many specific initiatives with the Western Balkans, said the EU Ambassador to Serbia Sem Fabrizi in an interview for the Blic daily.

Blic: How would you describe the year ahead for the relations Serbia – EU

It is difficult to make predictions also considering the global situation. I certainly hope that 2021 will be less complicated than the one just concluded. However, our priorities are clear. We need to continue working together to bring the pandemic under control, primarily by rolling out a massive vaccination campaign. We must bring back strong economic growth, maintaining regional stability and overall redoubling efforts to advance on the enlargement road. On the EU side we remain totally committed to work with Serbia to make substantial progress on all these fronts.

Blic: The most difficult test for the EU during the COVID 19 crisis was to show solidarity. Has the EU succeeded when it comes to the Western Balkans?

I would say that 2020 was for the EU the year of solidarity, both internally and externally! We have pulled all our forces together. Never in the past has the EU taken on such direct responsibility for its citizens, in terms of economy and health. We have defined an unprecedented 750 billion euro economic recovery plan – Next Generation EU – where the funds are allocated on the basis of the amount of damage each Country has received during the pandemic. We have also launched a continental vaccination plan – where every Member State has given the EU the role of procuring vaccines on an equal basis and according to clear criteria. Worldwide we have directed our global development portfolio (the EU is the number one donor in the world) to support the most vulnerable by providing substantial financial help and sound political support, including for a global vaccination campaign for all in close coordination with UN and WHO. 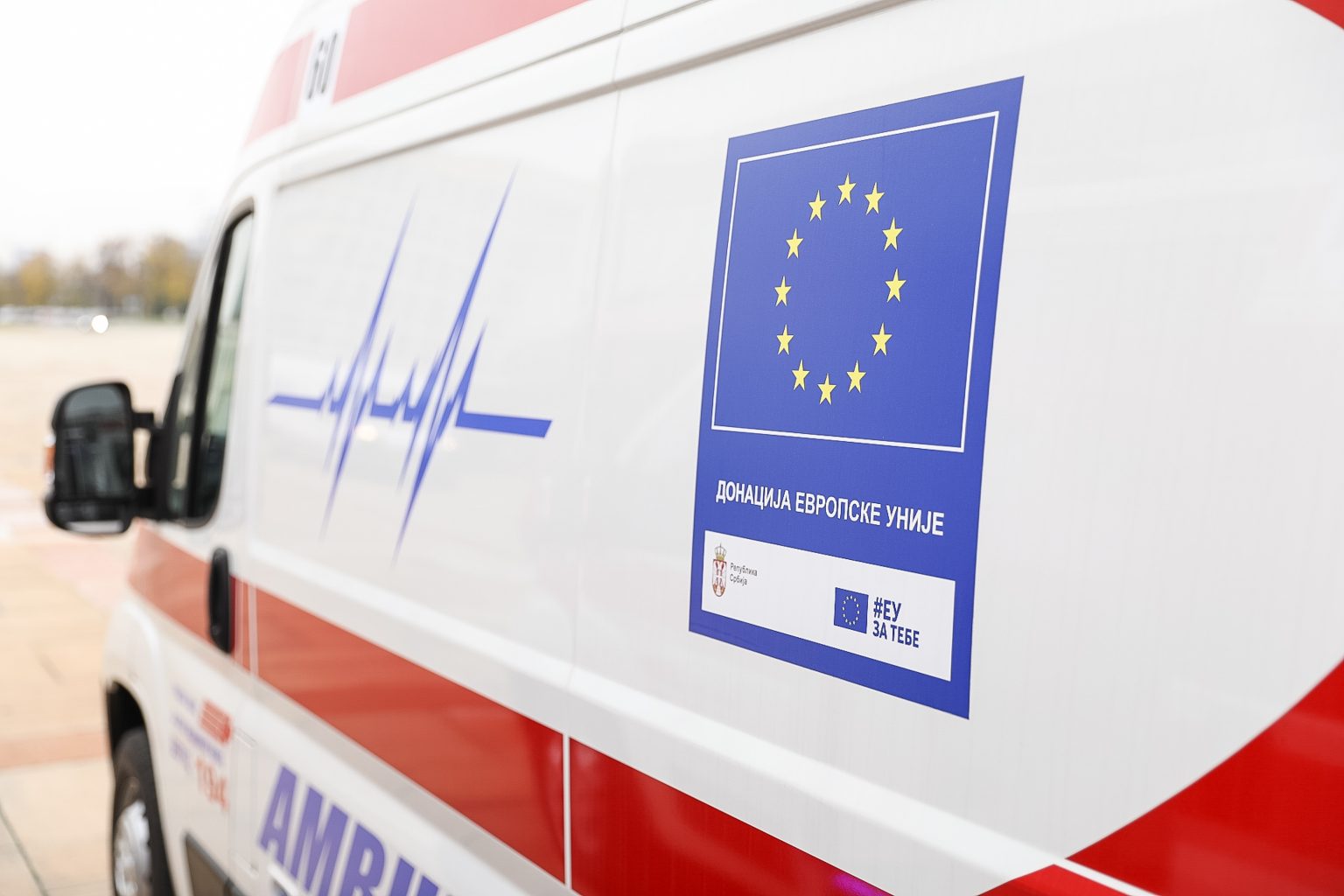 Throughout the year we have been working particularly in the Western Balkans. We have deployed many specific initiatives that prove the special consideration the EU accords to this part of Europe. Following the outbreak in March we acted swiftly and effectively with immediate financial resources and policy instruments. We associated Serbia and the WB with our health policy mechanisms. We laid down an Economic and Investment Plan for the next financial cycle supported with 9 billion euros in donations. We are working to help deliver vaccines as fast as possible.

This is not a new approach for the EU. We have always been close to Serbia in moments of difficulty, most recently during the floods in 2014, the migration wave in 2015 -17, and Covid in 2020.

This help goes on the top of the substantial financial support that the EU provides to Serbia every year and free of charge. In 2020 we pumped over 190 million euros in national IPA funds into the Serbian economic and social system, and contracted a quarter billion euros for additional projects.

What would you call this? For me it is solidarity.

Blic: Are you satisfied with the amount of aid that arrived to Serbia from the EU during COVID 19 crises?

Yes, I am proud of what we achieved and how we did it in the midst of a one-in-a-century pandemic. The facts and numbers are on our side. Back in March we immediately directed 93 million Euros in economic assistance and over 15 million euros specifically for the needs of the medical system. Thanks to these funds we have donated to Serbia millions of PPE units (masks, suits, gloves), 140 triage containers, ventilators, oxygen concentrators, 32 fully equipped ambulances and special decontamination vehicles, 200 Serbian extra health workers have been employed since July with EU funds. I signed an additional 2,6 million euro grant health package on 30 December to help Serbia to have a safe and timely cold chain for administration of vaccines. The Commission authorised on December 29, an additional 70 million euros in  IPA regional funds – of which Serbia will receive a large part – to help providing vaccines for priority groups from the EU to WB early in 2021. In October the European Commission adopted a sound and credible Economic and investment plan to relaunch economic growth starting in 2021. This is a considerable amount of assistance and no one else has helped Serbia the way the EU has. 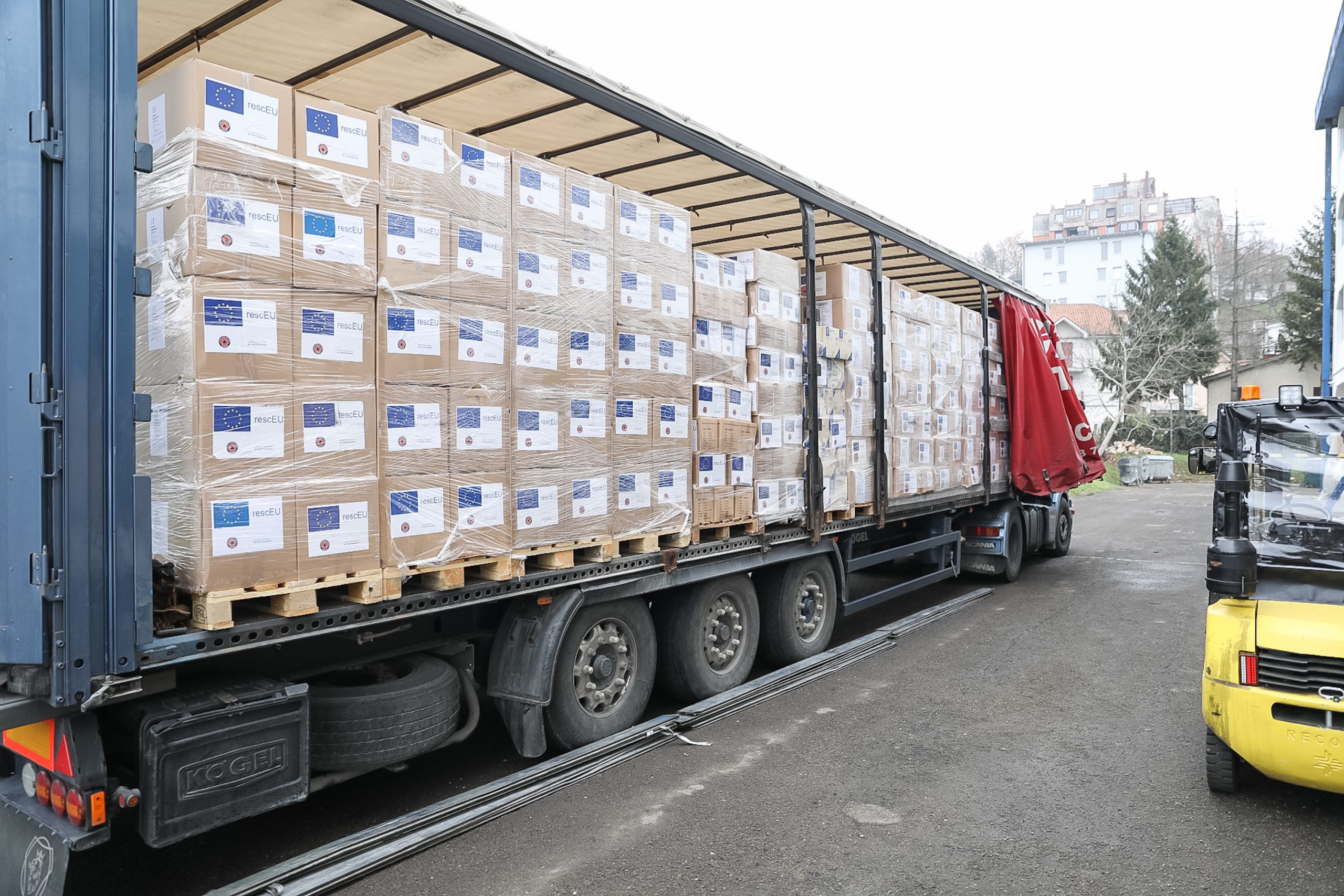 Blic: And are you satisfied with the way the government in Serbia is talking about it?

The authorities have been closely associated with this strategy and have played a key role in identifying the immediate needs of the health system and the mid-term needs of the economy recovery. They have publicly thanked the EU on several occasions. And is also important for me is that the citizens have felt the solidarity with which we are assisting Serbia with all the instruments in our possession.

Blic: The Economic and Investment Plan has been adopted, when do you expect the first results?

The Economic and Investment Plan has a regional dimension and big objectives – roads and railways, green growth, digital infrastructure and human capital investment. This is a big investment plan. Big things take time. What is important right now is that all the important elements of the Plan are in place. The list of the flagship projects which are ready to start has been adopted. The 9 billion euros in IPA funds (donations) are solidly part of the EU budget, and we have the necessary political buy in from the region. We need to work together to make this plan a success. The European Commission is willing to make every effort to have most of the projects identified completed, or well on the way to completion, by 2024

Blic: The year was not fruitful in terms of opening new chapters. Do you expect that to change in 2021?

I very much hope that Serbia will open new chapters. But note that this is a decision which must be taken unanimously by all EU Member States. EU integration is a merit-based process. In 2020 the opinion in the EU Council was that Serbia had not made sufficient progress in key areas such as the rule of law – like judiciary, the fight against corruption, and freedom of expression – to open new chapters and that an acceleration and deepening of reforms was necessary. If Serbia progresses in these key areas – the recommendations in the EC 2020 report are clear – I don’t see why Serbia shouldn’t open new chapters. Everyone has interest to move the process forward. 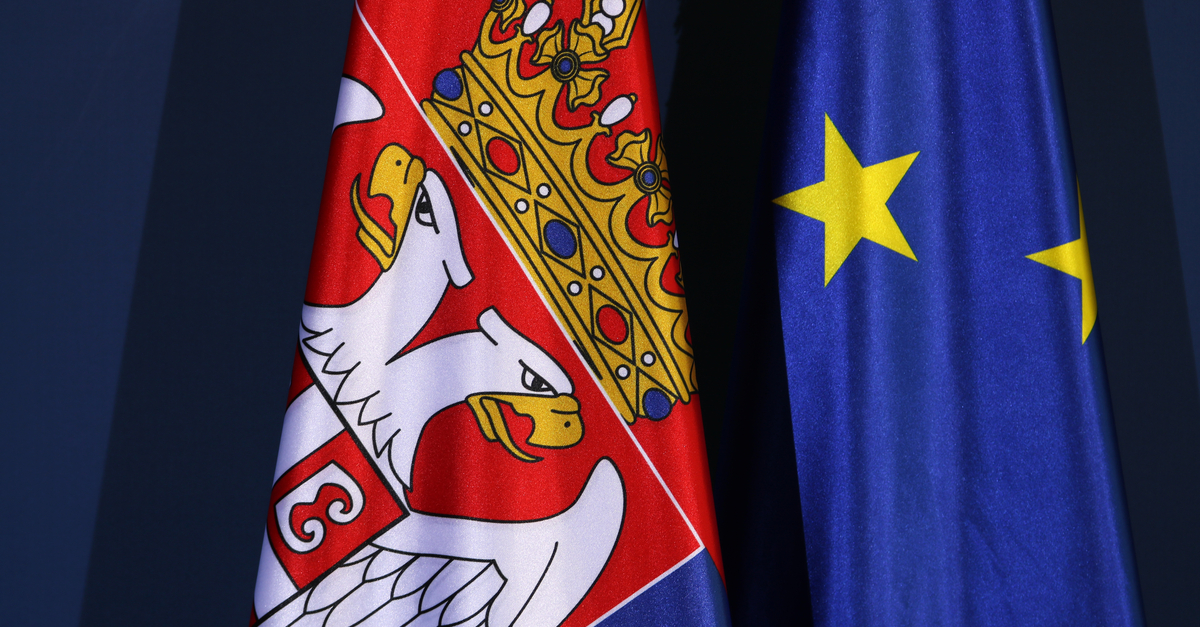 Blic: Minister Joksimović said that she expects the Intergovernmental Conference with the EU, will it be held soon?

We are just at the beginning of  2021 and it is early to make previsions when the next IGC will be held. I certainly favour to hold it sooner rather than later as the IGC is an important political occasion to take stock of progress and move the process forward. But – as I said earlier – accession is a merit-based process driven by reforms. I believe that the best support for ‘accelerating’ the holding of the IGC would be ‘accelerating and deepening’ the reform process in Serbia, particularly in key rule of law area, as recommended in the EC report and encouraged by the EU Member States and other stakeholders.

Blic: It seems that the way of leading the accession process for next year has not been clarified to Serbia yet, regarding statements of minister Joksimović? Will they have a clear situation, or it is clear already?

A new methodology has been adopted in 2020 to accelerate the process, give more political steer and provide more predictability in the process. Serbia has expressed itself in favour of this new methodology. I believe that some of its elements will still need to be clarified. The fundamentals of the enlargement process – however – are already fully clear.

Blic: We don’t say that much of closing a chapter, how important is that at the moment?

We should talk more about it, as closing chapters marks a real step forward. It means that the reform process in that specific area is completed. Serbia has so far (provisionally) closed education and culture chapters. Ultimately, at the end of the process Serbia will have to close all chapters. That is the final goal. For each chapter (transport, agriculture, environment, for example) there are identified steps (called benchmarks) that need to be taken by Serbia to open a chapter and there are other steps for its closing. It is certainly a complex exercise but vital for Serbia’s future in the EU. I would encourage everybody in Serbia – policy makers as well as citizens – to further familiarise with the EU integration process and the tasks that lie ahead for every sector to see how things can be pushed forward more effectively and rapidly. Closing chapters is a stepping stone for membership. 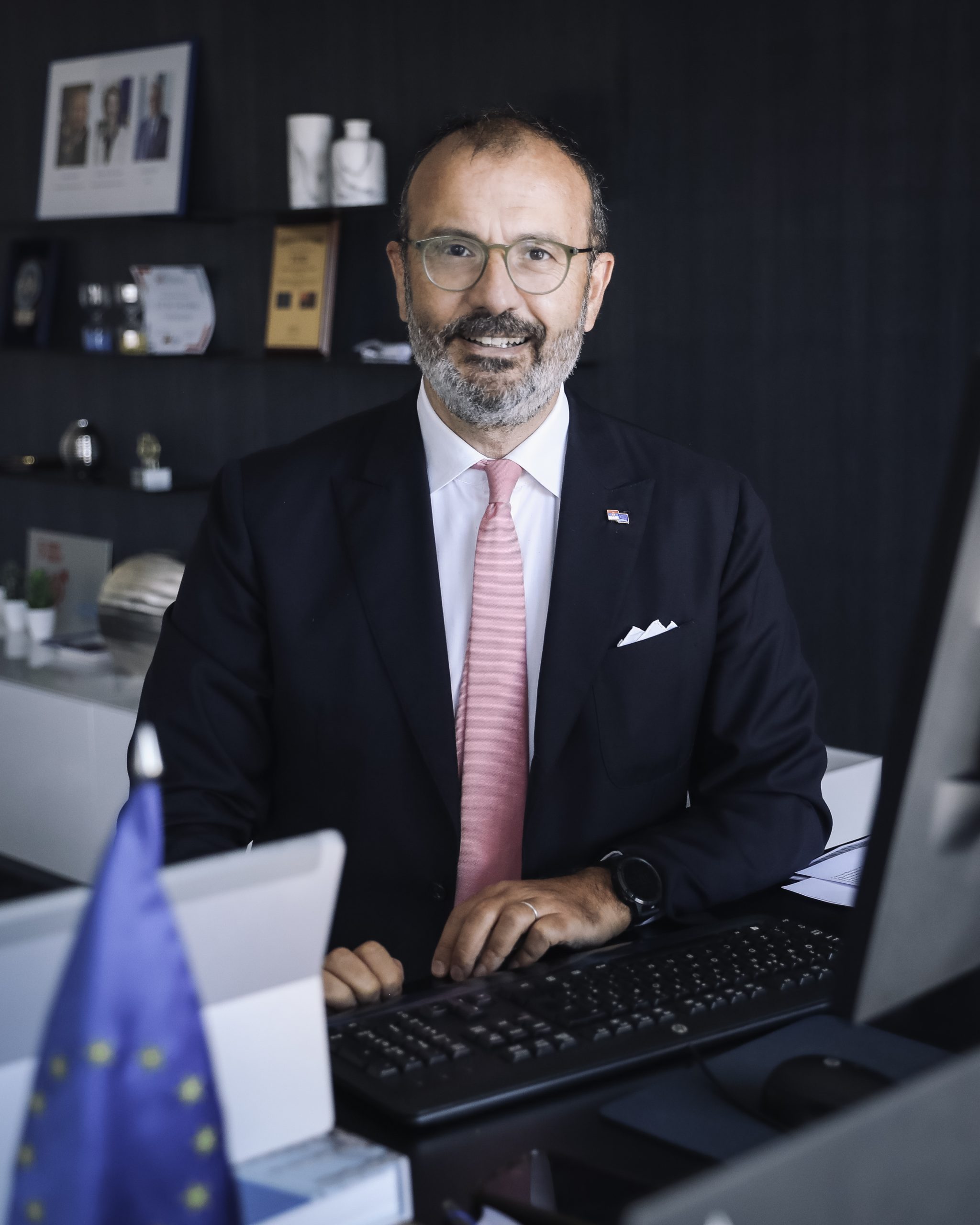 Blic: Is there an estimate of how many could be closed this year?

It would be unwise to speculate as there are many elements and players involved. It is clear that the more convincing the reforms are the more the chapters could be open and closed.

Blic: In your opinion, has Serbia managed to keep the European perspective?

The opinion polls of Ninamedia at the end of December commissioned by the EU Delegation confirm that the large majority of the people interviewed see the EU as a positive opportunity for Serbia and are overwhelmingly in favour of the accession. This positive outlook of the population is very important and also telling on the real EU perspective of Serbia among the people. I saw in the orientation of the new government and the first steps taken at the end of the year, a firm and clear commitment for adopting and following policies which go in the direction of accelerating the accession. I do really hope that 2021 will see a new dynamic translated into concrete steps in this direction. On my side I will continue to work to support this process.