Under the slogan “Be an Initiator of Change in Your Environment”, UN Women, with the support of the European Union, has demonstrated why gender equality is important for the circular economy, at the mural next to the Science and Technology Museum in Skender Begova Street.

Mural, jointly painted by TKV and a group of girls aged 10 to 15 years old, shows a pop culture icon of Small Mermaid stuck in a plastic bottle that symbolizes a whole living aquatic world that masses around the planet due to excessive plastic use. On the other hand, she as a female hero can be and is the driving force of change in her environment.

Aleksandra Đorđević, better known as TKV, says that the mural sends a clear environmental message about the harmfulness of the use of plastics in our natural environment, and that women are also pushing for change. TKV for many years with the help of its spray and template points to the problems of insufficient gender equality, domestic violence and in general the inequalities of women in society. 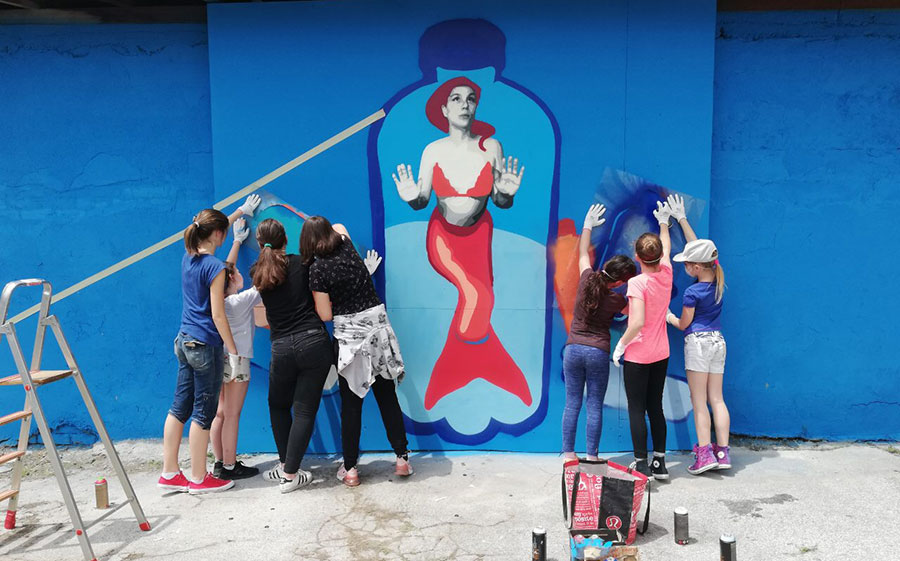 Director of UN Women in Serbia, Milana Rikanović, pointed out that the special goal of creating a mural was to empower and encourage girls from primary and secondary schools to fight in different ways for gender equality.

“Today they have shown that they are a great team and that they can do everything together. On the other hand, graffiti is a perfect example of a seemingly insignificant – or semi-destructive act – such as writing and painting on a wall, it can actually promote a social change making it visible to everyone on the street. ”

According to Maja Lalic, Creative Director of the Mikser Festival where mural was created, with small investments in raising awareness and skills in relation to patterns of responsible production and consumption, women can be, many of them already being, the main engine and heart of the circular economy and culture.

“This can happen at all levels, from households and communities to business and politics.”

Mural was created within the project “Key Steps Towards Gender Equality”, implemented by United Nations Agency for Gender Equality and Women Empowerment (UN Women) with the financial support of the European Union.