Only in the health sector, what the EU has done with Serbia in the last 20 years over the last few years is fundamental. The EU donated above 200 Million euros and loaned 250 million others to make the health system in Serbia stronger. This is the basis which is going to help Serbia overcome the COVID-19 virus.

The EU has equipped hospitals, laboratories, institutes of public health and blood transfusion centres and provided 252 emergency medical vehicles for health centres around Serbia, of which 122 have been delivered with ventilators, which is crucial to fight COVID-19. Only for that project, the EU donated 8.7 million euros.

More globally, the EU supported Serbia’s whole healthcare network: through the European Investment Bank – the EU Bank – funds in the amount of 250 million euros were used for the reconstruction and construction of 20 large hospitals across Serbia, including the Torlak Institute, which is crucial in the fight against the virus Corona.

Only last year, the construction of a new building and the renovation and expansion of Clinical Center Niš has been completed. That includes work on existing facilities, new blocks, courtyards and parking spaces. A total of 45,000m2 were reconstructed, and this significant regional health centre received 600 hospital beds, of which 38 were for intensive care and 42 for semi-intensive care.

Today, 2.5 million Serbian citizens can receive the highest quality medical service in this facility, which also involves complex surgical procedures because it has 17 state-of-the-art operating rooms. The EIB financed the construction of 34 million euros, while the budget of the Republic of Serbia allocated 16 million euros for the procurement of equipment.

Thanks to the assistance of the EU, millions of Serbian citizens have better and more modern medical care, in other cities, too. The EU made possible the use of new modern surgical operating rooms, emergency centres, a large number of hospital beds, new ambulances and hospital kitchen and hygiene equipment purchased for centres in Kikinda, Pancevo, Sombor, Smederevo, Sremska Mitrovica, Zajecar, Cacak, Krusevac, Pirot and Belgrade.

The EU has helped to establish a National Cancer Screening Programme in the Republic of Serbia, with the donation of over 6.6 million euros so far.

Purchasing supplies of essential medicines and other medical supplies to public pharmacies and health institutions in Serbia should not be forgotten, considering EU donation over 43 million Euros.

The EU has provided much needed support to Serbian laboratories, with modern equipment and supplies in total value of 4.9 million Euros donation.

These are only some of the projects that have had the most impact on Serbian people, but these numbers mean that The European Union is by far the biggest donor of non-refundable assistance to Serbia. Also, Serbia is the largest recipient of EU donations in the Western Balkans and one of the largest in the world. 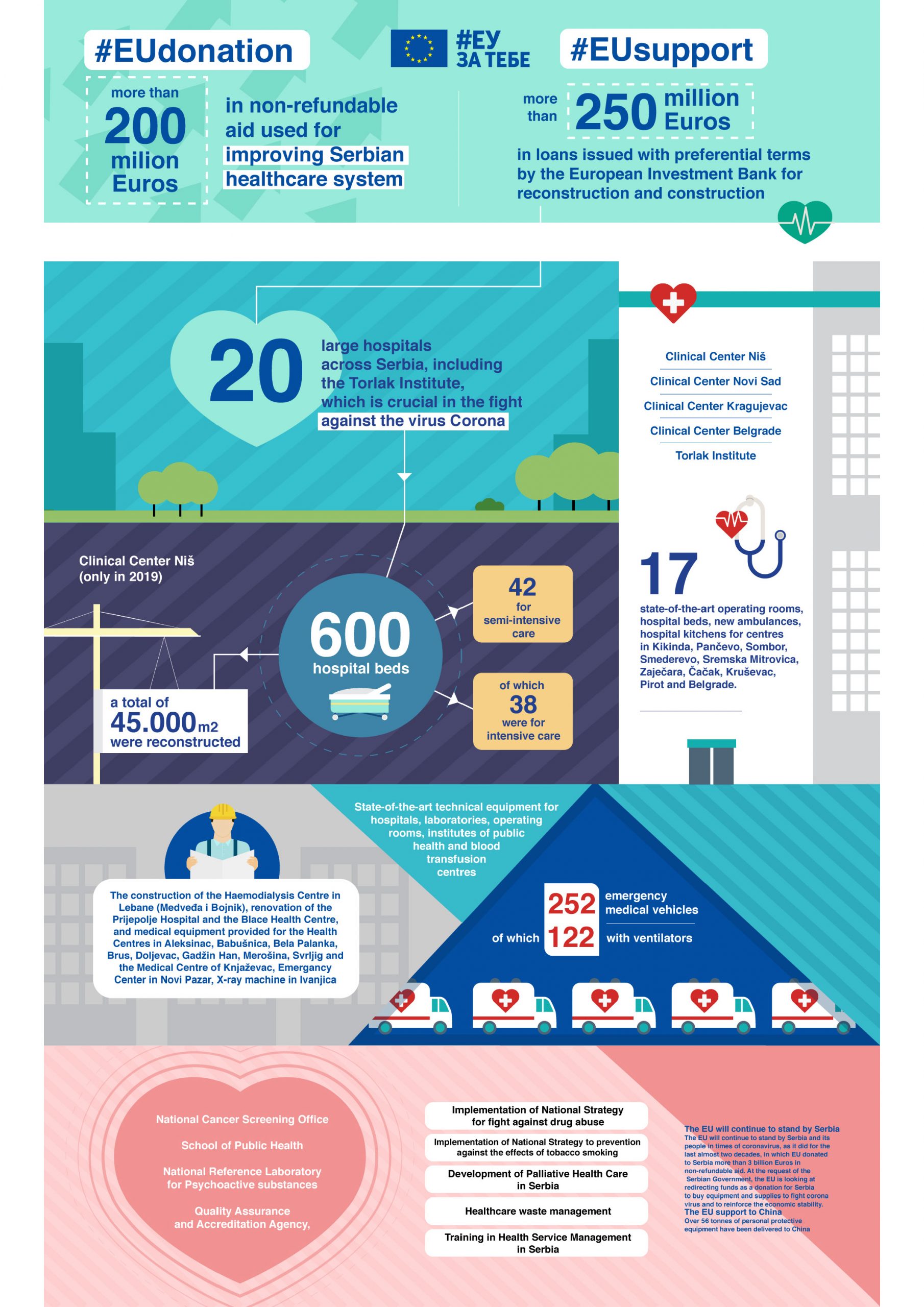