You are at:Home»News»Renovated Palace of Justice Open

The renovated Palace of Justice official opening was held in Belgrade today. The largest judicial building in Serbia has been reconstructed with funds from the European Union, the Republic of Serbia and through a favorable loan from the European Investment Bank.

The opening ceremony and the tour of the building were, among others, attended by the Head of the EU Delegation to Serbia, Ambassador Sem Fabrizi, President of the Republic of Serbia Aleksandar Vucic, Prime Minister of Serbia Ana Brnabic, Minister of Justice Nela Kuburovic and Minister of European Integration Jadranka Joksimovic. 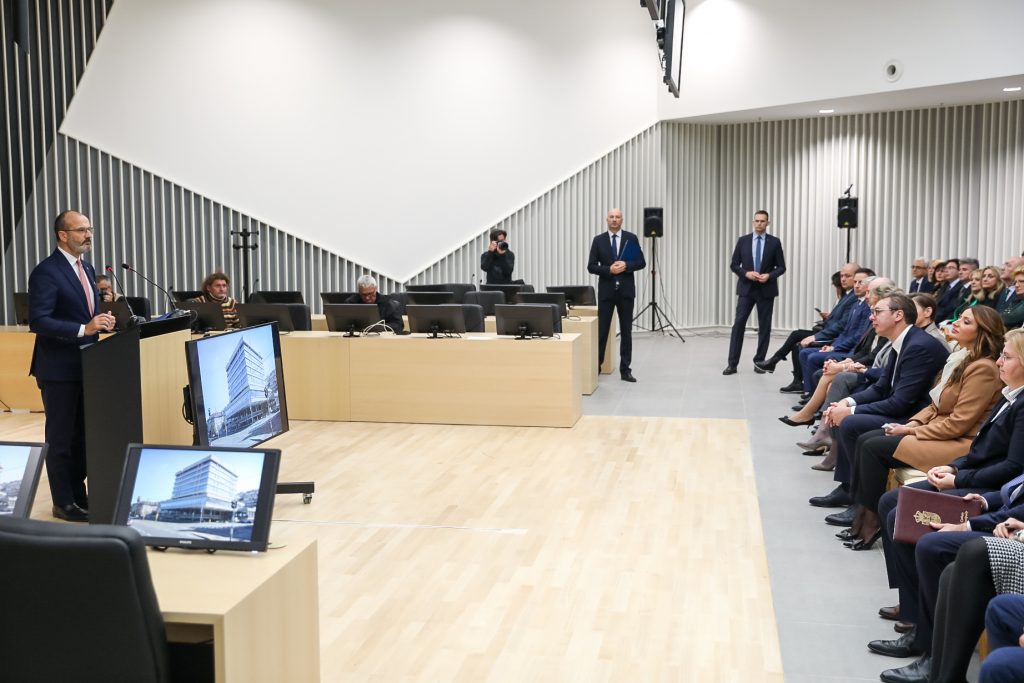 Ambassador Fabrizi says that the visit to the renovation works of the Palace of Justice was his first official activity when he stepped down as head of the EU Delegation in July 2017 and is pleased that these works have now been successfully completed. This building is a true example of the rule of law, Ambassador Fabrizi points out.

“The rule of law today is more than ever the foundation of any democratic society, and that is why it is so important in the European Union, and it is equally important in Serbia, which has decided to become a full member, in order to align with the principles on which the EU rests,” says the Head of the EU Delegation to Serbia, who added that the EU absolutely supports Serbia in the enlargement process, without” if “or” but.

Reconstructed Palace of Justice with EU funds (grants and EIB loans) is a concrete symbol of the much wider #RuleofLaw reforms that the EU is supporting in Serbia in order to improve independence, efficiency, accessibility and accountability of its judiciary system. #EUzatebe pic.twitter.com/7w6Q0ViAUl

“In terms of efficiency, our assistance has contributed in a very concrete way. For example, through support and cooperation with the Supreme Court of Serbia, the backlog of 1.2 million cases has recently been reduced. As I have already pointed out, efficiency is only part of the reforms. Independence and accountability and the judiciary are crucial to ensuring that justice is available to all,”says Ambassador Fabrizi.

President Vucic points out that, with regard to the rule of law as a whole, much remains to be done and thanked for the EU grant.

“It’s European taxpayers’ money, thank you very much for that. We will continue to build facilities, reconstruct facilities in Serbia, and I urge you to continue to support us in this and to provide even more assistance and support in the future,” says President Vucic. 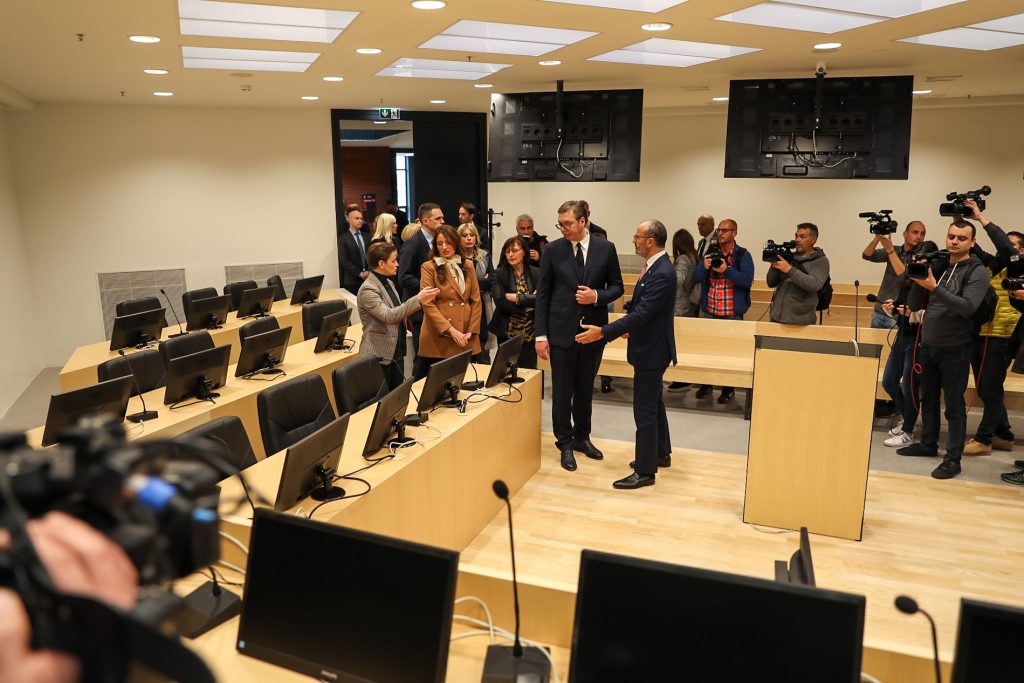 Minister Kuburović emphasizes the greater number of courtrooms and cabinets as a special advantage of the new building.

“After 29 months, the reconstruction of the Palace of Justice has been completed, one might say that it is a long period, but I must remind you that it is the largest infrastructure investment of the Ministry of Justice in the last 40 years. The Palace of Justice waited a long time in the 1970s, as it was the first facility intended exclusively for the needs of the Belgrade court, and I believe that judges and prosecutors were waiting to return to their old address,” says Minister Kuburovic. 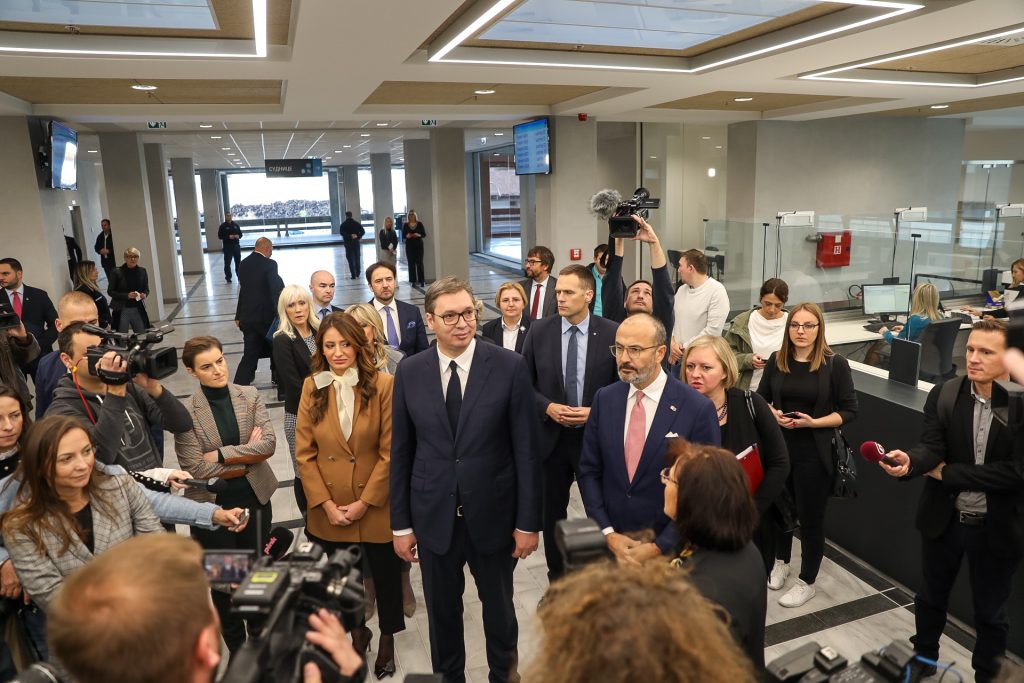 The employees of the Palace of Justice will now have incomparably better administrative and technical conditions for work, all following international standards and recommendations of the European Commission, said the President of the High Court in Belgrade, Aleksandar Stepanovic.

“Today is not only a day of moving into a building that is equipped to the highest standards of the European Union but also a step forward in the area of government law and basic democratic principles, as the importance of the judiciary is crucial for any country that strives for European values. It represents the basis for respect for human rights and freedoms, while an independent judicial system also implies the assumption of responsibility by the holders of the judiciary,” says Stepanovic.

The reconstruction of the Palace of Justice is part of a broader EU project to help reconstruct buildings used by the judiciary in Serbia. It covers over 20 cities, intending to support the National Judicial Reform Strategy, improve working conditions and the efficiency of judicial authorities.