The Symbol of the Serbian Coat of Arms, the Eastern Imperial Eagle Fighting for Survival

It adorns the Serbian coat of arms and it has given its name to Serbian sportsmen: a powerful bird whose wing span reaches over two meters – the eastern imperial eagle. In Serbia today, due to human neglect, there is only one surviving eastern imperial eagle nesting pair – Bora and Eržika. The members and volunteers of the Bird Protection and Study Society of Serbia (hereinafter: BPSSS) are dedicated to the effort of conserving the imperial eagle, and with the aid of the EU, are doing their utmost to conserve this remaining eagle pair located in the Vojvodina-based village of Srpski Krstur. Thus, Bora and Eržika are under constant monitoring and protected from the possible harmful effects caused by people and nature.

“Due to mass industrialization and deforestation, the natural habitat of many species has greatly decreased, even disappeared. In fact, this is not only a problem in Serbia but in the whole world. However, what is the most detrimental fact for the eastern imperial eagle is the mass use of insecticides informally known as Furadan,” claimed Slobodan Knežević from BPSSS.

The use of this toxic pesticide has been prohibited since 2014, Knežević said, further explaining that Furadan was first used for seed insect control, although its use was significantly expanded when its effectiveness was discovered.

According to him, Furadan was used to deal with stray dogs, jackals and foxes which created havoc on farms and slaughtered cattle. The procedure is very simple but with devastating consequences for nature: a piece of meat is smeared with insecticide and thrown haphazardly into nature.

“However, in the natural world, it is always more likely that birds are the first to perceive the meat and thus, they are the first to be poisoned. A case from Christmas 2018 showed us that this could be of a great concern, whereupon we received information that a young satellite-tracked bird hatched in Austria ended its six-month long flight over 4,200 kilometers and eight European countries by being poisoned near the town of Svilojevo near Apatin,” said Knežević.

Thus, a potential new resident of this area was lost forever, and at BPSSS they realized that they have to put in effort to raise awareness about the dangers of pesticides to nature primarily in the    communities  where poisoning occurs most often: “We are doing our utmost to explain the harmful use of Furadan to farmers.”

There are various other legal and alternative so-called toxins that can be used for controlling agricultural production, but killing predators is strictly forbidden. “The solution is to better secure the farms so that the predators cannot enter easily and carry out damage. People think they are alone in the world and that everything belongs to them, which is the basic problem. It takes a lot of endeavor and effort to change this kind of mindset,” another BPSSS member, Aleksa Vukićević, concluded.

The biggest problem, according to Knežević, is that farmers became accustomed to using the insecticide and found ways to get hold of it even after its prohibition as they considered it efficient and ignored their negative effects.

In fact, BPSSS members, he added, had witnessed a seller at a Senta fair offering “fifteen liters of Furadan on a stall right alongside one selling hamburgers, despite the fact that 0.5 milligrams of this chemical could kill twenty one persons.”

The bird in old oak trees

The disappearance of their habitat and prey has contributed to the disappearing of the imperial eagle, but it is the use of Furadan which has struck the final blow to its almost entire extermination in Serbia.

The imperial eagle has often nested in old oaks known as ‘traces’ that were often found at entrances or exits of hamlets, where locals were most likely to put the sign of the cross. Due to its sacral value, those trees were not felled and the eagles nesting there were dubbed ‘imperial.’

With industrialization and economic development, the natural habitats were reduced, along with the old trees which served as nesting places for these powerful birds of prey.

In addition, there was a shortage of food: the imperial eagle feeds on various rodents, but most often European souslik – a species from the squirrel family most commonly found on the steppe pastures and meadows of Vojvodina. With the mass plowing of the pastures, the souslik also started to vanish, which was reflected on the number of imperial eagles. 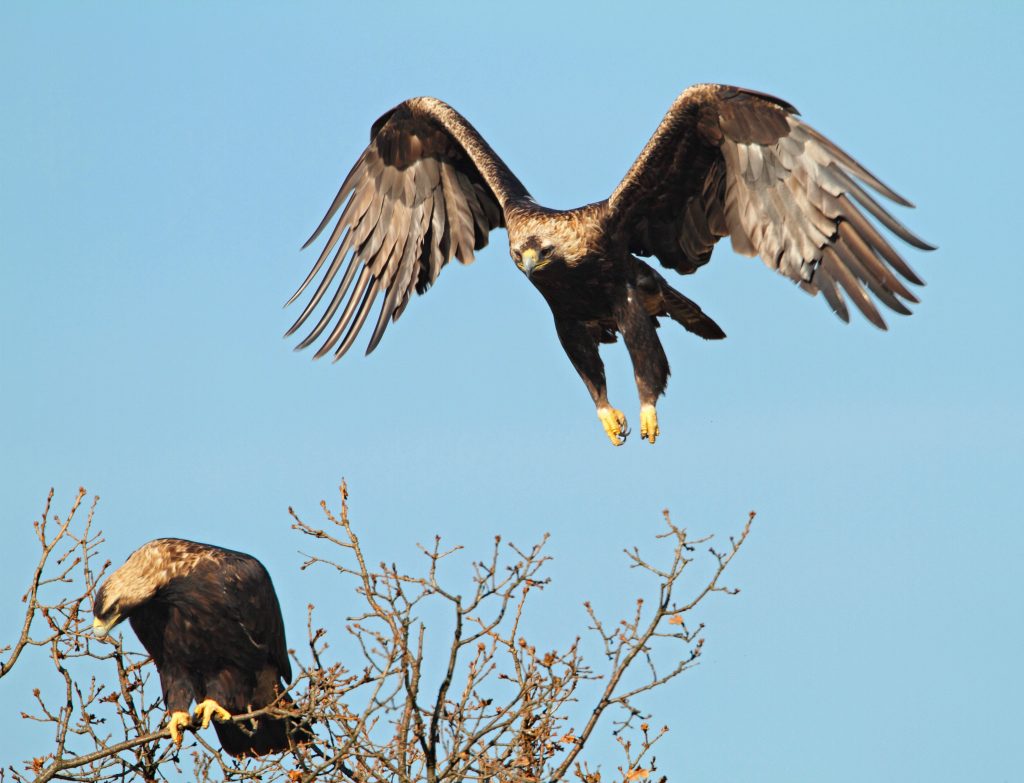 According to the data from the Birds of Serbia and Montenegro – breeding population estimates and trends: 2008–2013 paper, the imperial eagle belongs to the rare species of nesting birds, with merely 5–8 pairs left, and thereby, Bora and Eržika are the only known nesting pair of imperial eagles, said Knežević and Vukićević. They pointed out that it is necessary for the imperial eagle to spend five years in the wilderness in order to reach full maturity, and it is uncertain whether the eaglets living in Serbia will reach the fifth year, when they can multiply. Another uncertainty is whether they could find a mating partner.

It is encouraging that the Hungarian imperial eagle population is now stable, although the same things that are happening now in Serbia had also occurred in Hungary, the two BPSSS representatives pointed out.

“They were saved due to a sound policy and human care, so it is expected that at some point when the space is full up some of them will fly down to Serbia,” Aleksa and Slobodan, dedicated bird lovers, said with optimism.

The BPSSS, together with the Institute for Nature Conservation of Vojvodina Province from Novi Sad, participates in the PannonEagle Life project – the Conservation of Imperial Eagles in the Pannonian Region, funded by the European Union and co-financed by the Ministry of Agriculture of Austria and Hungary. The project was initiated in October 2016 and ends in April 2022. The main objective of the project is to increase the imperial eagle population by reducing the mortality rate caused by humans.

This goal was set by the Pannonian countries participating in the project – Serbia, Hungary, Slovakia, the Czech Republic and Austria.

“Our main task is to provide conditions for increasing the population of imperial eagles in Serbia. Our employees and volunteers are in attendance for the breeding season – from the beginning of April to the end of July – and they are merely a kilometer away from the nest in order to try to eliminate all anthropogenic impacts on the birds. This means that they are there to prevent someone from accidentally felling a tree, protect from fires and from plowing during incubation,” Knežević explained.

He also pointed out that this was the first project in Serbia, where “there is someone literally at hand nearby the nest, monitoring what is happening.”

The necessity of this was already proven in the first year of the project, when there was a severe summer storm just before the birds left the nest, but BPSSS employees and volunteers reacted without delay. Namely, they checked the nest for the young eaglets Duško and Lilika after the storm.

Due to a swift reaction, the eaglets parented by Bora and Eržika have survived the wrath of nature. They were then taken to the vet, after which an artificial nest was made a t the same location and there were fed up to the point when the parents again accepted to take care of them.

The mission of BPSSS members, as well as that of the EU project, does not end there: in addition to active eagle conservation activities, the point of the project is also to raise awareness about the use of pesticides.

Thus, the eagles Bora and Eržika were saved, as well as their eaglets and biodiversity. The efforts for this have crossed the borders, along with the powerful bird of prey which can be found on the Serbian state of arms.

The eastern imperial eagle Crusade (Lat. Aquila heliaca) has been on the Serbian coat of arms since August 17, 2004.

The Bird Protection and Study Society of Serbia (Serbian: Društvo za zaštitu i proučavanje ptica Srbije) is leading efforts not only to conserve the imperial eagle but also all other bird species and protect nature. The motto of BPSSS, whose members are true nature lovers, is “All Together for Nature and Humans.”