Ambassador Fabrizi: The Success of Erasmus+ The First Step towards the Academic Society Dialogue

“The EU is the third strongest economy in the world and Serbia naturally wants to be a part of it. Nevertheless, this path must pass through a period of transformation that may be painful. This requires time, but it is not crucial, but the transformation and acceptance of the value of the European Union itself”, said the Head of the Delegation of the European Union to Serbia, Ambassador Sem Fabrizi during a visit to the University of Privredna akademija.

The occasion for the event was marking 30 years since launching Jean Monnet activities that are part of the Erasmus + program of the European Union. That is why the debate on the “Euro-integration of Serbia and the region of the Western Balkans” was organized. Ambassador Fabrizi pointed to the key access points for Serbia’s EU accession during the talks with students. He stressed that Serbia must keep up with the times the economy is constantly evolving, which requires stable infrastructure, which Serbia still has to work on. 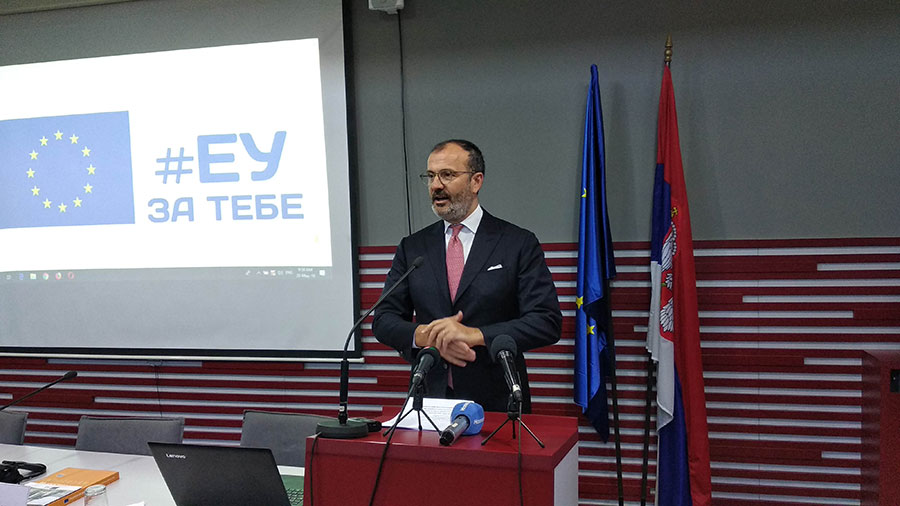 “There are several key challenges that need to be answered. It is a matter of migration, infrastructure, including the digital sphere, the issue of agriculture and food security, and reconciliation in the region. All this affects primarily the economy and compliance with EU standards. The question is not whether you fit into the system, but how to dig it, “the Head of the EU Delegation in Serbia concluded, pointing out Serbia’s education system as a positive example.

“The Erasmus+ program works great. Not only do young people from Serbia go abroad, but many foreign students come to Serbia to study. This is the first step towards fostering dialogue between the academic community, policy makers and civil society, “explained the ambassador, referring to the basic values ​​of Jean Monnet activities aimed at promoting high standards in teaching and researching European Union policies.

From 2015 to 2018, within the program, the University of Novi Sad Academy of Economy conducted the module: Accessing Serbia to the European Union.

“The subject was examined by more than 200 students of elementary, master and doctoral studies, as well as employees in local, provincial and state institutions. We can boast that our faculty is the first accredited private faculty in the country and we have about 5,000 students and about 350 employees, “said the chair of the Rector’s Office of the Privredna akademija, prof. Dr. Marijana Carić.

The Jean Monnet initiative was named after one of the founders of the EU. So far, more than 5200 projects have been launched through more than 100 countries. A large number of areas are covered, such as history, politics, economics, law, and other disciplines. Within the activities, a strong and dynamic professional network on the world level was formed.