The International Day in Support of Victims of Torture was celebrated in downtown Nis with a street performance entitled “Road of Support for Victims of Torture.“ Through music and acting, the performers tried to both illustrate what victims of emotional and physical violence go through, and draw the public’s attention to the importance of offering support to victims of torture.

The event was part of the project Holistic Action Against Torture, implemented by the International Aid Network IAN in partnership with the Centre for Human Rights Nis and the Centre for Civic Initiative from Prilep, and funded by the European Union. On this occasion, the organisers of the event pointed out that survivors of torture and other extreme traumatic experiences may develop different psychological and health issues. “Most often, victims of torture are people who are the most discriminated against and marginalised in the society, including members of all vulnerable categories,” said Jelena Loncarevic of the International Aid Network IAN. 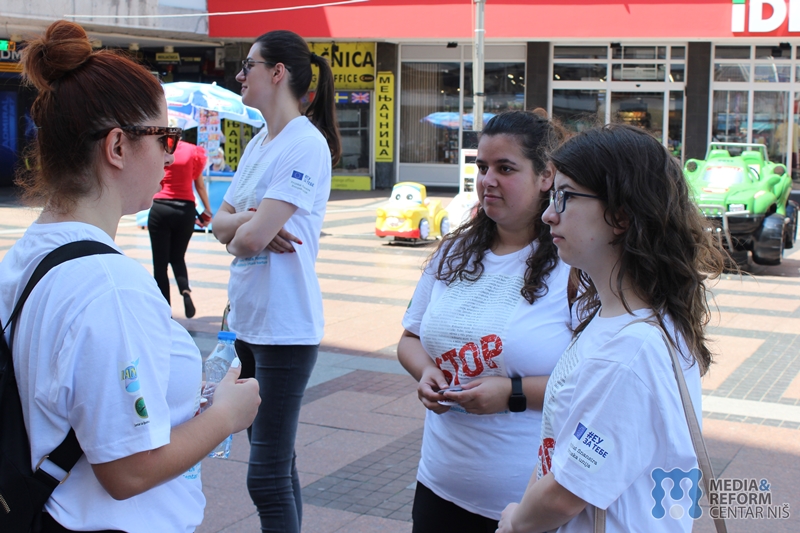 Loncarevic reminded that, according to the UN Convention, torture is defined as one of the gravest breaches of human rights; an act of violence in which severe pain or suffering, whether physical or mental, is intentionally inflicted on a person.

Lidija Vuckovic of the Centre for Human Rights Nis said that the Centre offers all forms of support and is actively engaged in helping victims of torture. “Victims of torture must be strengthened. Despite turning to us for help and despite our efforts to document and confirm people’s claims, they give up out of fear from potential consequences, intimidation, etc.,” Vuckovic noted and stressed the importance of enforcement of international standards in order to ensure the best possible protection for victims.

As part of the celebration of the International Day in Support of Victims of Torture, the movie “A Reminder” by Radoslav Cebic was showed. The movie, made within the project Holistic Action Against Torture, portrays beneficiaries of the project—victims of torture who have survived different forms of torture in times of war and peace—in a most direct manner, reminding us about numerous forgotten traumas, events, injustices, and breaches of law and human rights.

The International Day in Support of Victims of Torture is celebrated on 26 June. On this day in 1945, the UN Charter was adopted, the first UN document binding on the member states to protect and promote human rights. The UN Convention Against Torture and Other Cruel, Inhuman or Degrading Treatment or Punishment entered into force on this day in 1987 and has thus far been ratified by 162 countries. The European Union, together with its international partners, the United Nations, the Council of Europe, the International Criminal Court, regional organisations, national partners, and the civil sector, is strongly committed to combatting torture around the world.