Today, Head of EU Delegation to the Republic of Serbia, Ambassador Michael Davenport and Mayor of Sabac Nebojsa Zelenovic, handed the keys to social housing apartments to refugee, IDP and returnee families in Sabac. The construction and equipping of said facility was funded by the EU with EUR720,000. They have also visited the Jovanovic and Stojicevic families, one of the beneficiaries of EU assistance for flood relief programme.

Social housing facility in supportive environment has been built within the project “Support to the improvement of the living conditions of forced migrants and closure of collective centres” with apartments for 29 families from the collective centre Varna and seven socially disadvantaged families from Sabac. The project envisages the construction of additional 17 prefabricated houses for the same groups of population by June 2016. The project is implemented by “Hausing Centar“ with participation of the City of Sabac, Commissariat for Refugees and Migration and Centre for Social Work, and is aimed at accelerating the social inclusion of these families and support the closure of collective centre Varna in Sabac.

“The City of Sabac seeks to provide decent life to all of its citizens. Through EU support, there are now 36 families more with roof over their heads. This is part of joint efforts to help those in need,“ said Mayor of Sabac Nebojsa Zelenovic.

“By moving to new apartments, these families again have a chance to live with dignity, after having gone through difficult times. I am proud that the EU takes part in such an important project aimed at providing housing solutions to many people from collective centres,“ said Ambassador of the EU to Serbia Michael Davenport.

“We owe the European Union the debt of gratitude for its support to Serbia in addressing this issue; with EU’s support, we intend to close all collective centres in Serbia by the end of 2016,“ said Commissioner for Refugees and Migration Vladimir Cucic. 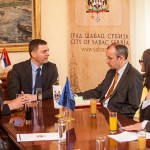 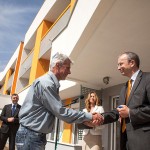 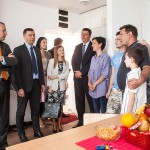 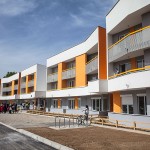 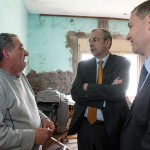 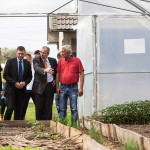 EU Ambassador and Mayor of Sabac also visited Gornja Vranjska village and the house of Mileta Jovanovic which should be reconstructed through EU funds within the second phase of EU Assistance for Flood Relief in Serbia Programme. They also visited the Stojicevic family which received a greenhouse for vegetable growing. The European Union has so far supported 1,700 farmers, the reconstruction of 27 households, construction of one house and rehabilitation of four damaged schools.

“The families in Sabac, many of which are engaged in agriculture, have suffered major damage during the 2014 flood. This is part of joint efforts which will continue through implementation of prevention measures in order to effectively prevent disastrous effects of future floods,” said EU Ambassador Michael Davenport.

Following May 2014 floods, the EU has provided some EUR1.8 million of assistance to Sabac for flood relief through IPA 2012 and IPA 2014 funds and EU Solidarity Fund.