European Year of Cultural Heritage kicks off in Serbia

An event titled “Let’s talk about culture at the Institute for Protection of Cultural Monuments“ in Nis kicked off the celebration of European Year of Cultural Heritage in Serbia.

Over a cup coffee, the citizens of Nis had a chance to chat about the work of the Institute and learn more about it from its representative, curator Djordje Stosic. He told them that the Institute was in charge of a territory much larger than the city’s urban area – nearly a third of the entire territory of Serbia – protecting cultural sites from Kladovo to Bosilegrad.

He talked about some of the most important cultural sites in Nis: the monument in Cegar, the Skull Tower and the 1936 University building. The guests were also brought closer to the original look of those monuments.

Following a presentation, which took place at the EU Info Point, the guests took to the Institute for Protection of Cultural Monuments where they met the staff of the Institute and learned about its work first-hand. The employees told them that the EU and Turkey were the biggest contributors to preservation of cultural heritage sites in Serbia. 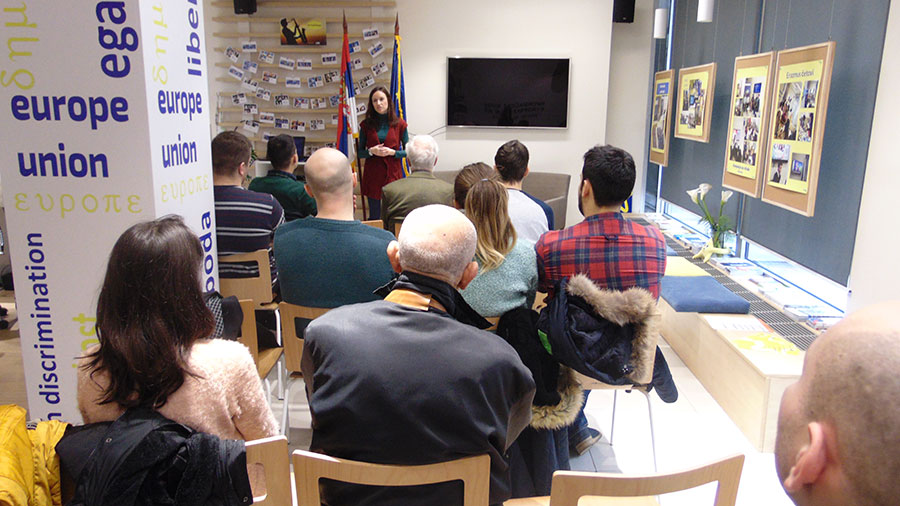 This was the first in a series of events the EU Delegation to Serbia will stage to celebrate European Year of Cultural Heritage. Snezana Andric from the EU Info Point Nis said numerous events would follow. “Each month we will visit a certain cultural institution. In March, we will visit the National Theatre; April brings a visit to the Gallery of Contemporary Art, whereas tours of the National Museum and the Symphonic Orchestra will take place in May and June, respectively,” Andric said.

Within the celebration of European Year of Cultural Heritage, the EU Info Point in Nis will also arrange visits to major cultural sites in Nis. The first visit in this series takes place on 24 February – a free guided tour through the Crveni Krst concentration camp and Bubanj memorial park.