Open Doors and scholarships for Serbian students at the Czech Republic

Within the Open Doors campaign, a series of events participated in by EU Member States’ embassies and organised by the EU Delegation to Serbia and EU Info Centre, the Embassy of the Czech Republic hosted students of several Serbian universities.

Ambassador Ivana Hlavsova took this opportunity to say the Czech Republic supports Serbia’s strategic goal of becoming an EU Member State. She also said she expected chapters 23 and 24 to be opened by the end of June about the time Dutch EU presidency was due to end. According to her, this will mark the beginning of reforms Serbia needs to undertake on its EU path.

Hlavsova underscored the EU doors were open for Serbia and other candidates, but added that success in the implementation of reforms decided the date of their EU accession.

“Economic development, democracy and stability of this region are among the priorities of our foreign policy,” said Hlavsova and explained that the Czech Republic supported Serbia not only in terms policy, but also through various projects and expertise on its EU path.

Granting scholarships to Serbian students is one of the ways the Czech Republic supports Serbia. Open Doors Day was an opportunity for Hlavsova to award scholarships to 11 students allowing them to continue their education at Czech universities. 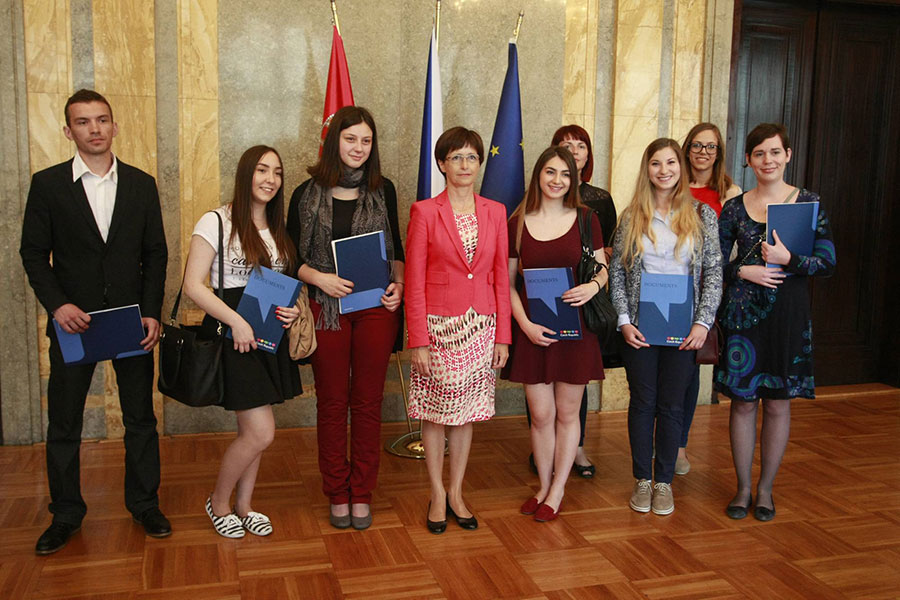 “I am thrilled about going to Czech Republic“

Jasna Brkic, one the scholarship holders, has graduated from the Faculty of Economy and will continue her master’s studies at the Masaryk University in Brno. “I will continue my studies in Brno at the Department of Business Management and I am thrilled about it. The Czech Republic is a beautiful country,“ Jasna said.

Isidora Katanic graduated from high school in Belgrade in 2015. “I have spent a year learning the language in the Czech Republic and now, thanks to this scholarship, I will start my studies at the Masaryk University in Brno. I will enrol in the Department of Anthropology at the Faculty of Sciences,“ says Isidora.

Nenad Stevanovic will soon complete his studies at the Faculty of Economy in Kragujevac and plans on continuing his education at one of the technical faculties in Czech Republic. One can easily tell from the look on his face he is happy about going there next September: “I have received foreign language scholarship which allows me to prepare for my studies next year. The scholarship will cover my stay in Czech Republic for the next three years. I want to enrol in Czech Technical University in Prague. I am interested in two of their faculties: informatics and robotics. I have been learning Czech language since 2015 in Kragujevac and I will spend another year mastering it in Poděbrady. It is a spa 50 kilometres away from Prague and home to a school dedicated to preparing students for entrance exams and future studies.“

Apart from scholarship holders, Czech Embassy also hosted students of architecture from Belgrade, Nis and Kragujevac as well as students of art history and arts academy from Belgrade. Architecture historian Ivan Markovic guided them through the building constructed in 1927 and designed by Alois Mezera. Originally built as the Embassy of former Czechoslovakia, the building remains one of the best preserved buildings of the period with authentic furniture, interior decorations and exceptional pieces of the world renowned Czech crystal.