Remarks by President Juncker ahead of the G20 Summit

Opening remarks by European Commission President Jean-Claude Juncker ahead of the G20 Summit at the joint press conference with Donald Tusk, President of the European Council, in Hangzhou, China:

I would like, together with President Tusk, to congratulate President Xi Jinping and the Chinese government on their preparations for this 11th Leaders’ Summit of the G20. Our Chinese friends have worked hard for this moment, and they have done a really excellent job. I am saying this not for reasons of politeness, but this is the truth.

This meeting is an opportunity for China to show the responsibility that comes with greater economic power – an opportunity to promote a global economy that is based on rules, and which works for everyone.

This summit is also an opportunity for the G20. After years of crisis, we must now show that we can produce long-term growth and restore confidence.

Today the European Union is leading the way. This year the Eurozone grew more quickly than both the US and the United Kingdom and we expect growth at 1.8 per cent. Unemployment has fallen to its lowest level in seven years. More than seven million jobs have been created over the same period of seven year 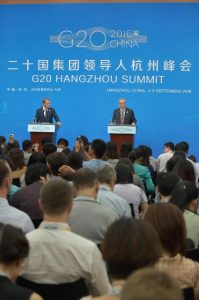 Our strategy – the virtuous triangle of investment, structural reform and responsible public finances – is working. It shows that reforms bring results. Therefore, at this summit, we will urge our G20 partners to implement the Growth Strategies that we have already agreed.

Our Investment Plan for Europe has already delivered EUR 116 billion of new investment in its first year. This means that we have already reached 37% of our target of EUR 315 billion. 200,000 small and medium-sized enterprises in Europe now have better access to finance. I am now working on proposals to extend the Plan, both in time and in scale.

Trade is another vital engine for new jobs and growth: on average, every EUR 1 billion we get in exports supports 14,000 extra jobs across the European Union. More than 30 million jobs in the EU now depend on sales to the rest of the world – that is one in seven jobs in the EU.

Our new trade deal with Canada – CETA – is the best and most progressive agreement we have ever, as European Union, negotiated. On top of the new opportunities it creates for businesses and citizens, it also marks a new approach to investment protection that is transparent and that is impartial. The agreement deserves the full support of our Member States and thus rapid ratification.

This is the European Union doing what it does best: supporting our economy, setting the rules of the game – on the basis of a clear mandate. We want to make sure they respect basic principles and the high standards that European citizens expect from us. Free trade must be fair trade.

This summit must urgently find a solution to the problems facing the steel industry. We will urge the major G20 producers to work together in a Global Forum facilitated by the OECD.

This brings me to our discussions on the matter with China. It is crucial that China accepts to set-up a mechanism to monitor over-capacity in the steel sector and its causes. We discussed the matter at the last EU-China summit in July and we agreed on a bilateral working group. Addressing the challenge of over-capacity in a credible manner will be the test case as the European Commission comes to assess the treatment of China in our anti-dumping and anti-subsidy investigations. I am determined, together with President Tusk, to defend the interests of the European steel industry and its workers.

Another question that is equally critical if we want to restore our citizens’ trust in the global economy is fair taxation. All companies must pay their fair shares of taxes in the countries where they make their profits. Last week, we made a landmark ruling on Apple. This is the result of intensive work which has been going on for many years. Our rules on state aid have always been clear: national authorities cannot give tax benefits to some companies and not to others. This is the level playing field that the Commission is always working to defend. We apply these rules without discrimination and without bias.

I want the European Union and our international partners to continue to work together on these issues. In the end, we share a common goal: to build a corporate taxation system that is efficient and that is fair. Together we promote these principles at the international level, including at the G20. This year the Commission presented new legislative proposals to combat tax avoidance, and to oblige multinational companies to publish country-by-country reports on their profit and tax.