Serbian Ceca loves weddings. She enjoys watching while the bride and groom stepping out of the church, she follows all TV shows on the subject, and she became a member of the library just to read romance novels. “It’s nice when people love each other. But it is hard to find a guy who is good and who will get along with you. I’d like to have a good guy,” she once said. And now, after a year and a half since she wished it, Ceca can tell her own love story. But like in every real life story, there was a long journey to the happy ending.

Ceca was born in Arandjelovac, where she lived with her parents and three sisters. She married very young and gave birth to a son. When she was still in the maternity ward, the competent authorities estimated that Ceca is not capable of taking care of her newborn son. She was officially categorized as a person with a moderate degree of intellectual disability and fully deprived of legal capacity: “I was moved from the hospital to the Institution in Veliki Popovac, and my son was taken to some other institution. Since then, I haven’t seen him or anyone else of my family,” Ceca begins her story.

Ceca: “I wanted to live in a town, to have a neighborhood, to spend time with friends”

For almost 20 years, Ceca has been a client of the Residential Institution for Adults and Elderly “Gvozden Jovancicevic” which is located in the village of Veliki Popovac near Petrovac na Mlavi. The Institution takes care of nearly 250 people with psychosocial and intellectual disabilities. “I got use to it quickly. Well, what could I do? I had nowhere to go. Every day, I was making up beds and helping in the kitchen,” she says. Ceca was later moved to the farm within the Institution where she and seven other clients took care of the garden, flowers and farm animals. “It wasn’t hard for me to work, but there were really too many of us in the Institution. And also, we lived in a village. I wanted to live in a town, to have a neighborhood, to spend time with friends and to get a job,” Ceca explains.

The opportunity emerged in the summer of 2014 when the Institution in Veliki Popovac became partner in the Getting a Life project led by the Czech non-governmental organization People in Need. The aim of the project was to deinstitutionalize eighteen clients and move them from Institution to the town houses where they will live with the support of assistants. Getting a Life project was conducted as part of a larger project Open Arms, which was supported by the Ministry of Labor, Employment, Veteran and Social Affairs and the Ministry of Health of the Republic of Serbia, and it was funded by the European Union.

In spring 2015, Ceca and five other people with intellectual disabilities moved to Petrovac. The beginning was not easy, but with the support of assistants and all the other people who were involved in the project, the community of this small town has slowly begun to accept the new residents. 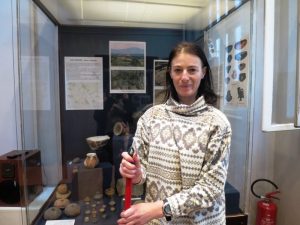 “Everything has changed. It’s better to live in a town, there are a lot of people. I can take a walk around, go to events, to the fair, to hang out with the neighbors, to shop by myself. There are people who don’t even want to say hello, but there are more of those who are nice to me,” Ceca explains.

Thanks to the project team support, Ceca has completed a course of knitting and crocheting or training for handling the money. She becomes a member of a library and volunteered in the local museum, “I went there in the morning to clean up the gallery, and then I washed ceramics with archaeologists from Petrovac and Belgrade. Milica was my boss, she is very nice and beautiful lady. I’d always work for her,” says Ceca.

Robert: “The first time I saw her was at a soccer tournament. The whole town was there, but I have noticed just her”

More things happened and changed in Ceca’s year in Petrovac than it ever did in her 18 years at the Institution. Though, one of these change is her favorite.

“Robert is from Melnica, it’s a village near Petrovac. He works in a private sector, cutting down trees with a chainsaw. We met at the grocery store. Come on, you should tell it,” smiling Ceca says to Robert, a kind 33-year-old man sitting next to her. “The first time I saw her was at a soccer tournament. The whole town was there, but I have noticed just her. I said to myself: ‘Sooner or later I’m going to meet her’. And one day, I went to the grocery store and she was there. I approached her, asked for her phone number and you wouldn’t believe, she gave it to me! I called her the day after to invite her for a drink. I wanted to take her to every cafe in Petrovac! And so, since the 13th September of last year, we are together,” Robert adds.

The strict rules of residential institutions had Ceca worries that she could start a relationship with someone, especially if that person was not a client of the institution. “I thought that the assistants would be angry, that they would forbid us to date. That’s why we were hiding our relationship at first, and when they found out and wanted to meet Robert, I was so scared,” recalls Ceca.

But to her surprise the assistants of the Independent Living service did not have any objections and Ceca and Robert continued their relationship without any fear. Robert often comes at Ceca’s house, they socialize with her roommates and neighbors. Ceca was invited by Robert’s aunt to a feast day, called slava: “I just sat there and enjoyed watching the two of them working together, talking and laughing. What a pleasure! Soon, I’m going to take her to meet my sister who lives far from Petrovac,” Robert is making plans.

The thing he likes the most about her is her kindness. She likes him because he does not like to argue. “Guys should give girls gentle attention and respect. This means, for example, that you should buy her a candy and take her to a cup of tea, to talk to her, to walk together and to give a hug,” explains Robert.

“My roommate and I got lost the other night,” Ceca retells a recent event with her roommate. “We were returning home by bus and we got off at the wrong stop. We began to walk, who knows where. It was already dark and it was raining, and we had no umbrella. So I called Robert and asked him to try to find us. I was describing him the things around us, and at the end, he succeeded,” she explains. “When I finally met them, I hugged them both. I was relieved that they are okay,” says Robert.

Ceca: “I have everything in my life. The only thing I miss is a job. I would like to be a maid or to take care of the elderly”

The positive changes continue for Ceca. After 18 years, Ceca visited her birth house last summer. She spent a weekend at sister’s place. “My heart was full of emotions. I drank coffee with my mother and father, I was chatting with my sisters, my brother-in-law was preparing a barbecue especially for the occasion! I wanted to help them around the house, but they didn’t allow me to do anything. They said that I wasn’t there to work, but to enjoy. Assistants told me that I could soon visit my son, too,” says Ceca.

“I have everything in my life. The only thing I miss is a job. I would like to be a maid or to take care of the elderly. But where would I find it? Whoever I ask, no one has job for me,” Ceca explains.

In most cases, people with intellectual disabilities are deprived of legal capacity, which is one of the main obstacles for their inclusion into everyday life of local community. Without legal capacity, a person cannot sign any contract, cannot decide where and with whom to live, he or she is deprived of the parental and voting rights. Basically, from a legal point of view such a person is treated as a child and instead of him/her, decisions are made by a guardian.

Therefore, during the implementation of the Getting a Life project significant effort was initiated to support clients to regain legal capacity. Until Ceca’s status is legally regulated, she can perform only temporary and periodically jobs. Her desire to work is huge, so she is actively seeking employment on a daily basis with the support of her assistants. Still, for the time being, she spends the most of her time at home.

“During the day, I clean house, sweep the yard, cook, drink coffee with neighbors, and in the evening Robert visits me or we go for a walk,” she describes.

“I like to take her out for a coffee or piece of cake, and after we go for a walk. We talk, then we are silent for a bit, then we talk again. When two people are getting along, when there is respect, then love has no boundaries, right?” asks Robert. “Well, I guess so,” she smiles.

The text originally appeared on: https://www.clovekvtisni.cz/en/articles/ceca-and-robert-love-has-no-boundaries?src=72