Introductory speeches were held by Oskar Benedikt, Deputy Head of the EU Delegation in Serbia, Vesna Kovac, State secretary of  the Ministry of Trade, Tourism and Telecommunications, Katarina Obradovic Jovanovic, Assistant Minister, Ministry of Economy and Maja Pejcic, Director of the Department for Project Management of the Development Agency of Serbia.

Benedikt has said that the introduction of E-Trustmark is one of the most important results of the project E-business Development which is funded by the EU with 2.5 million EUR. “This is not the end but the beginning of a process which introduces changes in electronic commerce Serbia, because it is inevitable for further economic growth, making profits and new jobs,” said Benedikt. He announced that the EU will continue to support the development of e-business in Serbia.

Vesna Kovac, State Secretary of the Ministry of Trade, Tourism and Telecommunications, said that Serbia has ambitious plans for the development of electronic commerce and electronic government. She added that in accordance with the Information Society Development Strategy by 2020, the goal will be the development of e-commerce, small and medium enterprises and the domestic private sector.

Certificates to the representatives of the awarded SMEs were presented by Steffen Hudolin, Head of Operations II of the EU Delegation in Serbia and Vesna Kovac, State Secretary of the Ministry of Trade, Tourism and Telecommunications.

The E-Trustmark will be valid until November 2017, after which the Center for Development of e-commerce and protection of consumers on the Internet from Novi Sad will continue accreditations and delivering the E-Trustmark to entrepreneurs in Serbia

The pilot e-Trustmark programme is just one of the achievements of the E-business development Project funded by the European Union with 2.5 million Euros and implemented in cooperation with the Ministry of Trade, Tourism and Telecommunications and Ministry of Economy of the Republic of Serbia. Project results and achievements were presented by Leszek Jakubowski, project Team leader.

Over the last 2 years, the project supported the Serbian SMEs to get a better insight into e-commerce, e-business and digital applications in order to improve their competitiveness and increase consumer confidence in electronic commerce. As well as piloting the e-Trustmark programme in Serbia, the project worked closely with Serbian SMEs, providing workshops and training sessions on e-business and e-commerce to more than 700 entrepreneurs. 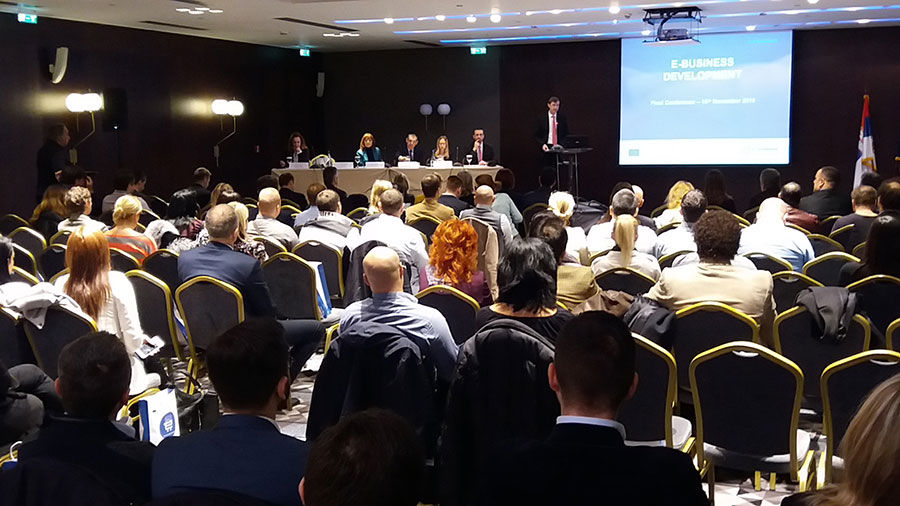 Some 1000 representatives from various Serbian state institutions attended 35 capacity building workshops on digital economy, e-business, e-commerce, and combating of cyber-crime. The project developed and published 9 brochures and useful handbooks on these subjects which were widely disseminated.

With an aim to increase e-consumer awareness and trust, an internet platform www.e-dukator.rs was developed to educate and inform Serbian citizens on their online shopping rights. Through this platform, more than 2,000 consumers passed an on-line test and obtained a certificate on safe e-shopping, while another 6,000 people were informed on their e-shopping rights through social media. Another portal, www.eposlovanjesrbija.rs was developed containing numerous texts and useful articles on various aspects of e-business and e-commerce in Serbia and worldwide. The portal will continue to be managed by the Development Agency of Serbia and the Ministry of Trade, Tourism and Telecommunications as a tool to promote work in the digital economy and also to raise awareness about and support for SMEs in Serbia.

During the second part of the conference, Panagiotis Zafeiropoulos, project’s key expert 2 deliver speech related to e-invoicing, while the future of E-Trustmark in Serbia was presented by Nebojsa Djuric from Center for the development of e-commerce and consumer protection on the Internet from Novi Sad. Representatives of SMEs – Museum Theatre Ltd. and Virid Ltd. presented the importance of cooperation with the project in obtaining E-Trustmark.

The conference, which was attended by more than 150 participants, was marked by the completion of project activities.

The project is part of a larger EU programme to assist Serbia’s SME sector. Over the last 15 years, the EU has allocated €78 million EUR to strengthen the Serbian private sector, with special focus on SMEs.

The companies that have been awarded the e-Trustmark in Serbia are:

About the E-commerce Trustmark:

What does E-commerce Trustmark stand for?

E-commerce Trustmark is an electronic commerce badge, image or logo displayed on a website to indicate that the website business has been shown to be trustworthy by the issuing organisation.

E-Trustmark gives confidence to customers and indicates to them that it is safe to do business with the web site displaying it. There two main European initiatives for electronic commerce Trustmark, the e-commerce Europe E-Trustmark and the EMOTA European Trustmark – are mainly market driven.