The EIB has agreed to provide EUR 100 million loan to improve functioning of the inland waterways navigation along Danube and Sava rivers in Serbia, which are a part of the Trans-European Transport Network priority project Rhine/Meuse-Main-Danube inland waterway axis. The loan will facilitate a shift from road to waterway transport. This will improve services to the local and regional industries as well as the agricultural sector, support economic growth and create jobs. The investments will enhance connections between European countries and regional cooperation.

In total, more than EUR 200 million will be invested into a number of projects, starting 2019. This includes the construction of the Bulk and General Cargo Terminal at the Port of Smederevo, a network of hydro-meteorological stations along the Danube and Sava rivers, the rehabilitation of river locks and the removal of WWII wrecks from the Danube river near the Port of Prahovo. Inland waterway transport has been growing by 11% annually since 2010 in Serbia.

The investments into the inland waterways in Serbia profit from an investment grant of EUR 11.4 million provided by the European Commission under the Connecting Europe Facility to co-finance the rehabilitation of the river lock Iron Gate 1. Additionally, the project may benefit of a technical assistance grant under the EIB’s Economic Resilience Initiative and will be also funded by the Serbian state budget.

The loan was signed by the Serbian Minister of Finance Siniša Mali and the EIB Head of Division Slovenia, Croatia and Western Balkans Matteo Rivellini in the presence of the European Union Ambassador to Serbia Sem Fabrizi and Deputy Prime Minister and Minister of Construction, Transport and Infrastructure Zorana Mihajlović. 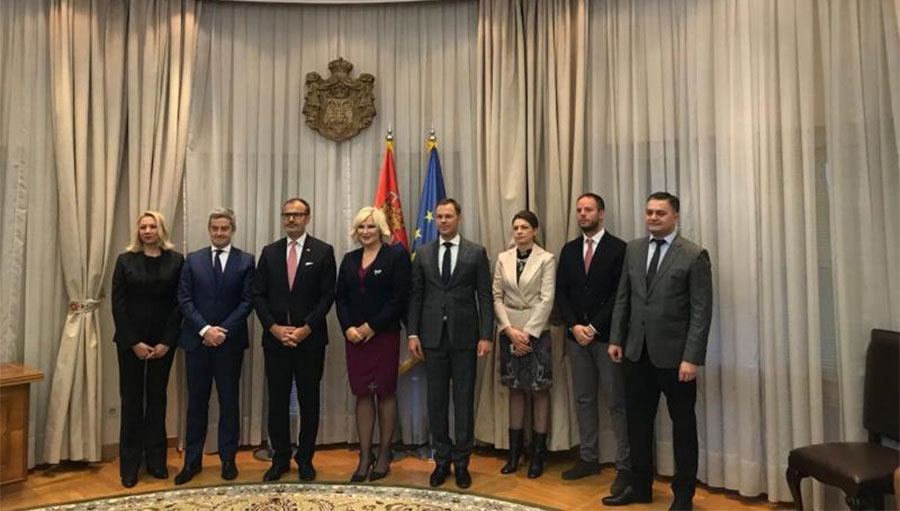 EIB Vice-President Dario Scannapieco, responsible for the Bank’s operations in the Western Balkans said: “As the Bank of the European Union, the EIB has been investing in the Western Balkans for over 40 years, bringing its expertise, the financing instruments and the commitment to generating impact and to addressing long-term needs in critical infrastructure. The loan signed today is another example of the very fruitful cooperation with the Republic of Serbia. I believe that this project will bring economic benefits to the country and its citizens and will lay a foundation for further investments in this sector”.

After the signing ceremony, Minister of Finance Siniša Mali said: “Ports, waterways, Intelligent Transport Systems, as well as the development of land infrastructure, contribute to the economic progress of the country, which is why the improvement of the river transport for the Republic of Serbia is of exceptional importance. This is a capital investment, which should contribute to the development of the port of Smederevo, as the capacities of the Terminal for bulk and general cargo will be expanded. Among other things, works are planned on Djerdap Iron Gate 1 and 2 navigational locks, and critical parts on the Sava and Danube rivers. New, shorter and better waterways, will contribute for the goods produced in Serbia to reach customers in Europe easier, faster and cheaper, which will further affect the competitiveness of the Serbian economy”.

The European Union Ambassador to Serbia Sem Fabrizi pointed:“Investments in the inland waterway infrastructure are a priority for the EU. This is why through the Western Balkan Investment Framework (WBIF) the EU is providing substantial grant funds for co-financing the priority investments, around 150 million EUR per year, which brings it to more than 1 billion EUR grant funds from 2014-2020. Serbia has a strong chance to get a substantial portion of these funds, if projects are ready to be implemented. This is why there is a need that we work together from the early project preparation stages, just as we did with the inland waterway infrastructure project.”

Deputy Prime Minister and the Minister of Construction, Transport and Infrastructure of Serbia, Zorana Mihajlović underlined: “With the support of the European Investment Bank, the Government of Serbia will invest more than 200 million euros in the development of river transport infrastructure in the next five years. Serbia has never had more investments in water transport sector than now and this is one of the largest investments in Danube in Europe in the last 15 years. Our goal is to fully integrate waterways of Serbia into the European transport network. By realizing these investments, I expect to double the participation of our waterways in the transport of goods in the next few years“.

The EIB is the leading international financier in the Western Balkans and has been active in the region since 1977. Since 2007, the Bank has financed projects totalling almost EUR 8 bn. Besides continuing its support for reconstruction and upgrading of public infrastructure, since 2010 the EIB has expanded its work in the Western Balkans into many new areas, such as health care, research and development, education as well as small and medium-sized enterprises (SMEs).Transport is by far the largest sector in which the European Investment Bank (EIB) has been active since its foundation. In the specific sector of maritime and inland waterways transport, the EIB has invested over EUR 6 bn in the last 10 years, of which EUR 250 million for inland waterways projects, all inside the EU. The present project is the first project in the specific sector to be signed outside the EU.