EU for Safer Navigation of the Danube

River corridors are an important resource to make transport economically and environmentally sustainable, jointly concluded European Union Ambassador Emanuele Giaufret, Minister of Construction, Transport and Infrastructure Tomislava Momirovića and Director of the European Investment Bank Alessandro Bragonzi after a visit to Prahovo. That is the location of sunken vessels from the Second World War which constrict navigation, pose a security threat and slow down ships on an important trade route.

The Danube is the second largest river in Europe, flowing through as many as ten countries. It is formed by the confluence of two smaller rivers on the Black Forest mountain range and it flows into the Black Sea on the territory of Romania and is part of the Rhine-Main-Danube canal. It is navigable along its entire length through Serbia (588 km), but in the Djerdap Gorge, below the port of Prahovo, the waterway of the Danube narrows considerably, due to numerous sunken vessels from the World War II. 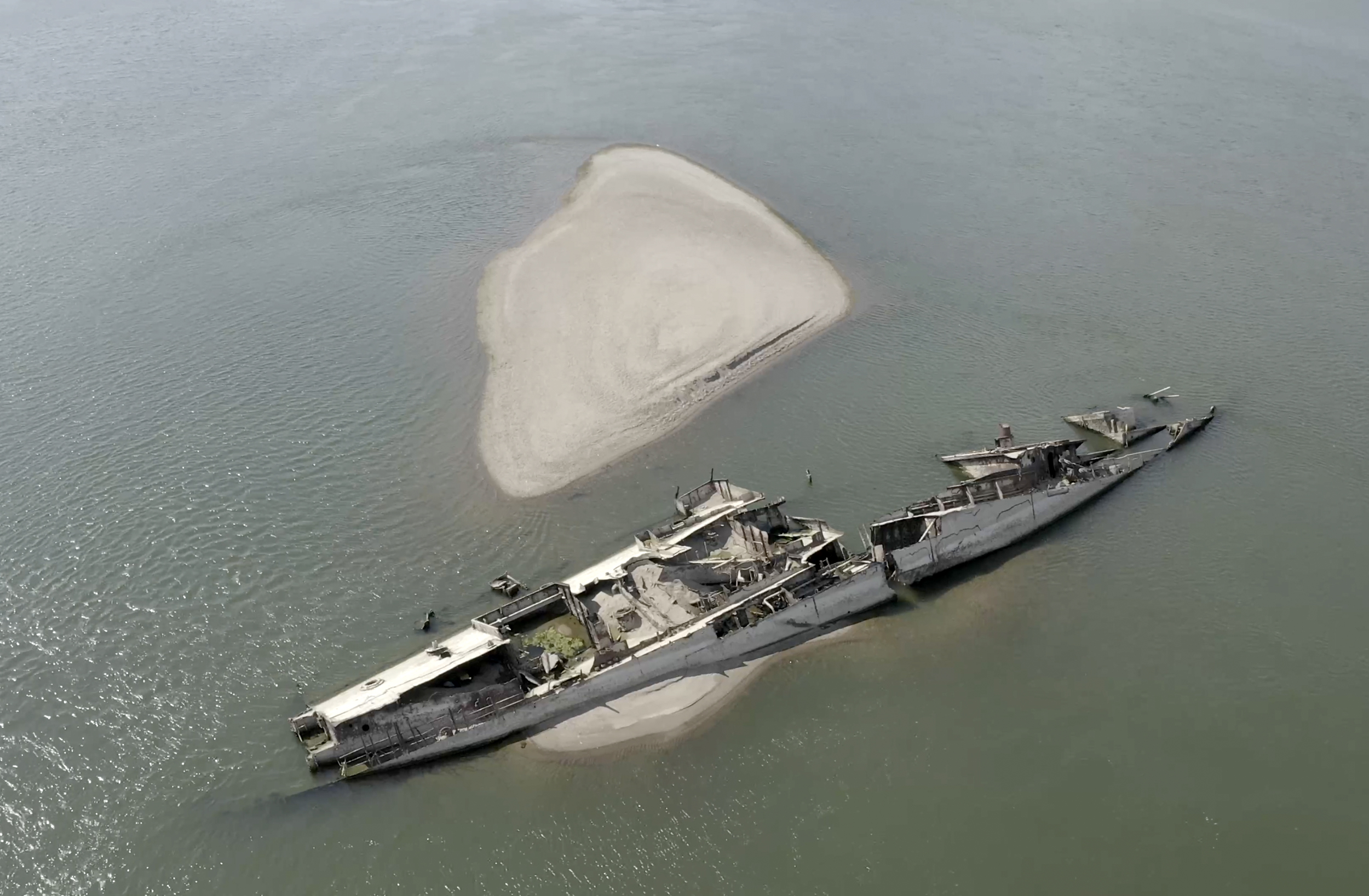 The waterway is 180 meters wide in that section of the river, but the presence of vessels narrows the waterway to just 100 meters. The sunken ships jeopardise the navigation, especially during low water level periods, as in the past few weeks. Sunken vessels are usually bellow the water level, and now they are visible precisely because of the lowering of the water level.

Ambassador Giaufret pointed out that sunken vessels represent a big problem primarily due to river transport, as well as a great danger because they contain unexploded ordnance, and they also present an environmental problem.

“Inland waterway transport is cost and energy efficient, and suitable for preserving the environment. It is very convenient for the transportation of large quantities of goods. As an example, one ship can carry the same amount of grain as 120 trucks. The same ratio applies, for example, when construction material is transported. These investments are practical examples of the commitment of the EU to the Economic and Investment Plan as well as to the Green Agenda, which is in focus in both member states and partner states,” says the EU Ambassador. 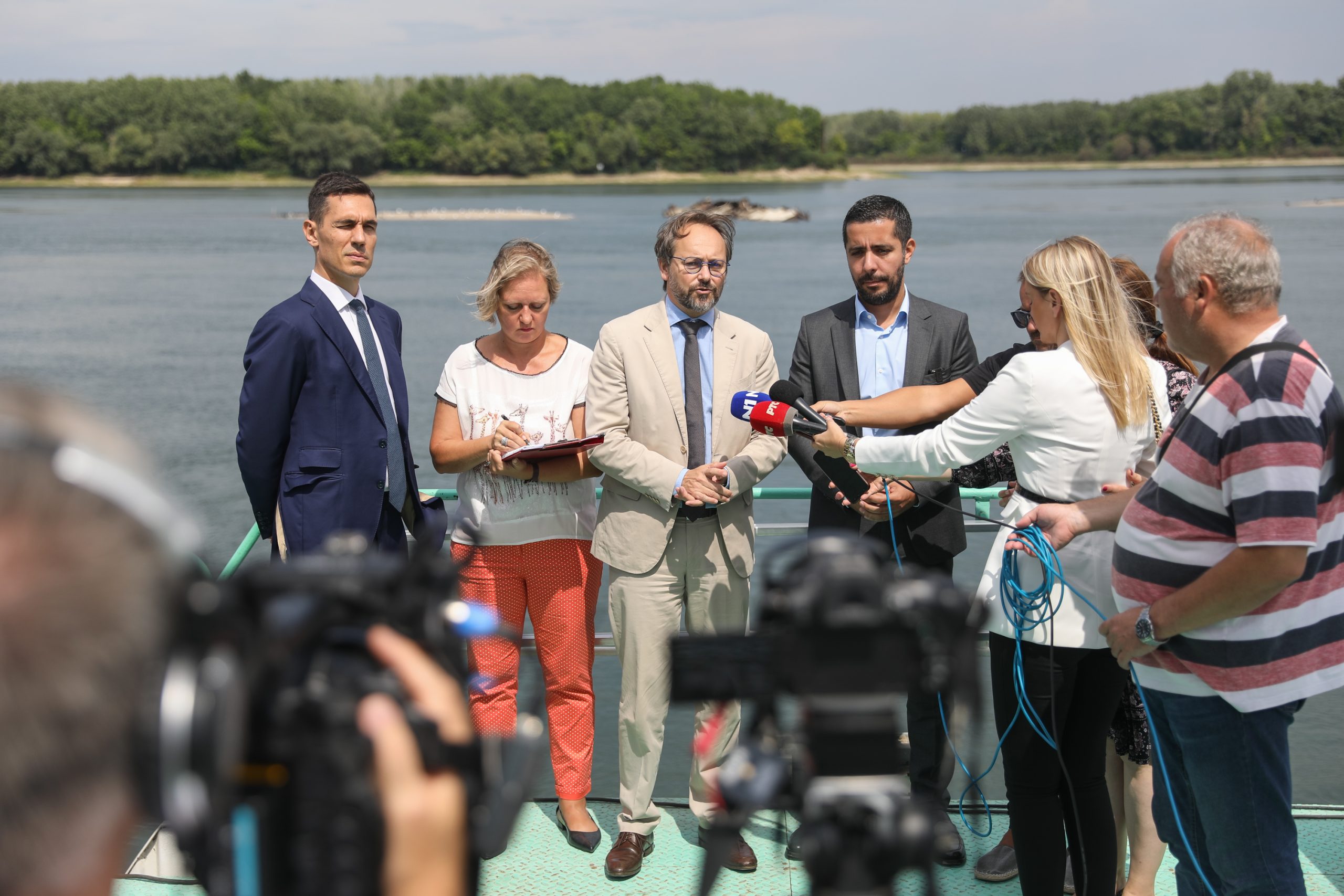 Minister Momirović said that the total value of the large infrastructure projects jointly implemented by the Republic of Serbia, the European Union and the EIB at the end of the Danube through Serbia is over EUR 100 million. Maintaining that waterway is one of the priorities of the state authorities.

“I am really proud that we managed to ensure the navigability of the Danube along its entire length on the territory of our country in these record low water levels, because the Danube is a European corridor and when we talk about cargo and freight traffic, if it is not passable, it does not have its full efficiency”, stated Momirović. 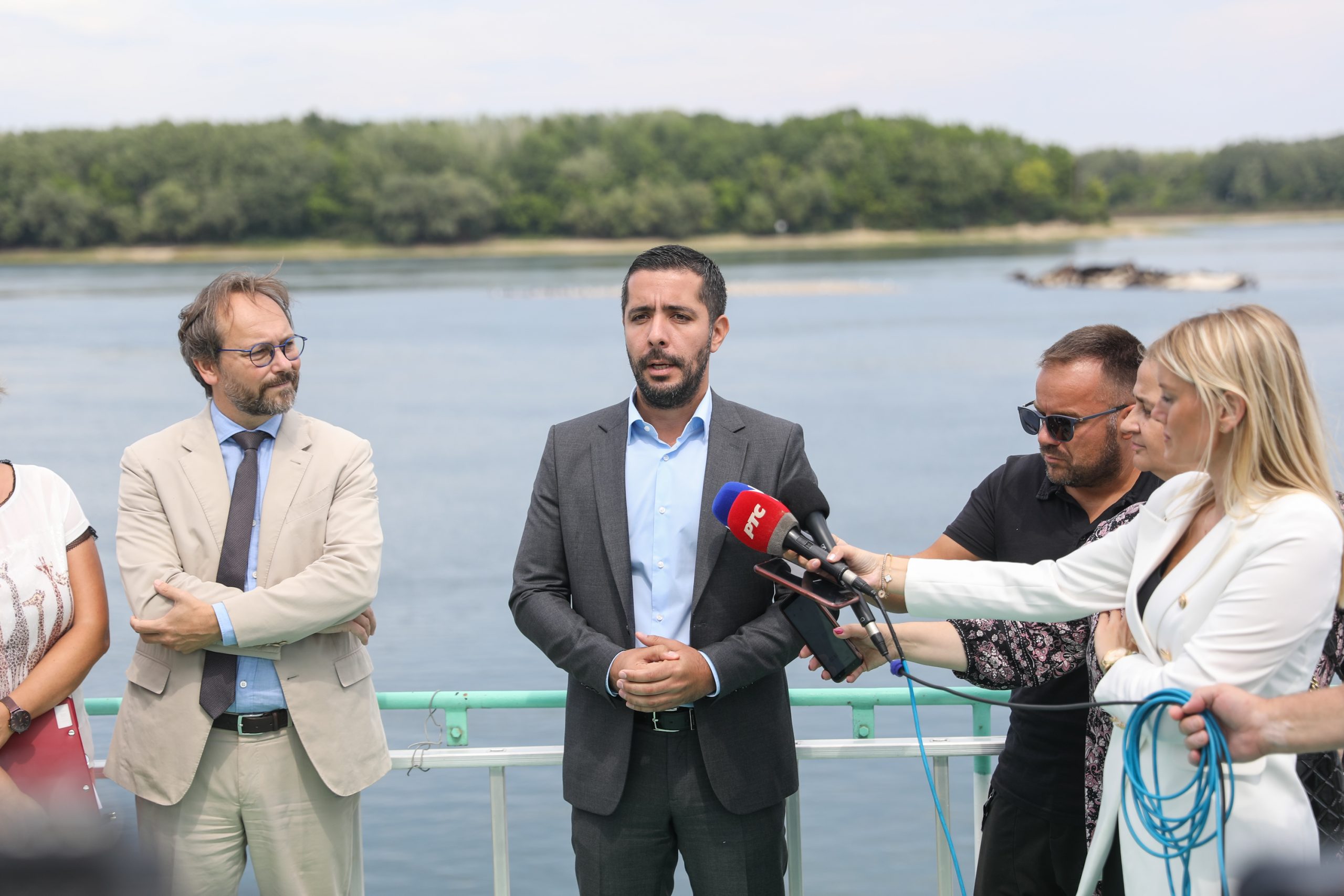 Noting the importance of investments in the river sector in Serbia, Director Bragonzi added that in addition to local economic development, a wider and more reliable waterway will be provided.

The Project to remove the sunken ships, which have been lying at the bottom of the Danube for more than seven decades, will be financed with EUR 16.55 million of EU grant approved through the Western Balkans Investment Framework (WBIF) and extremely favourable loan from the European Investment Bank (EIB), in cooperation with the Government of Serbia.

This investment was recognised as the Flagship project of sustainable transport of the Western Balkans Investment Framework (WBIF) 2022. 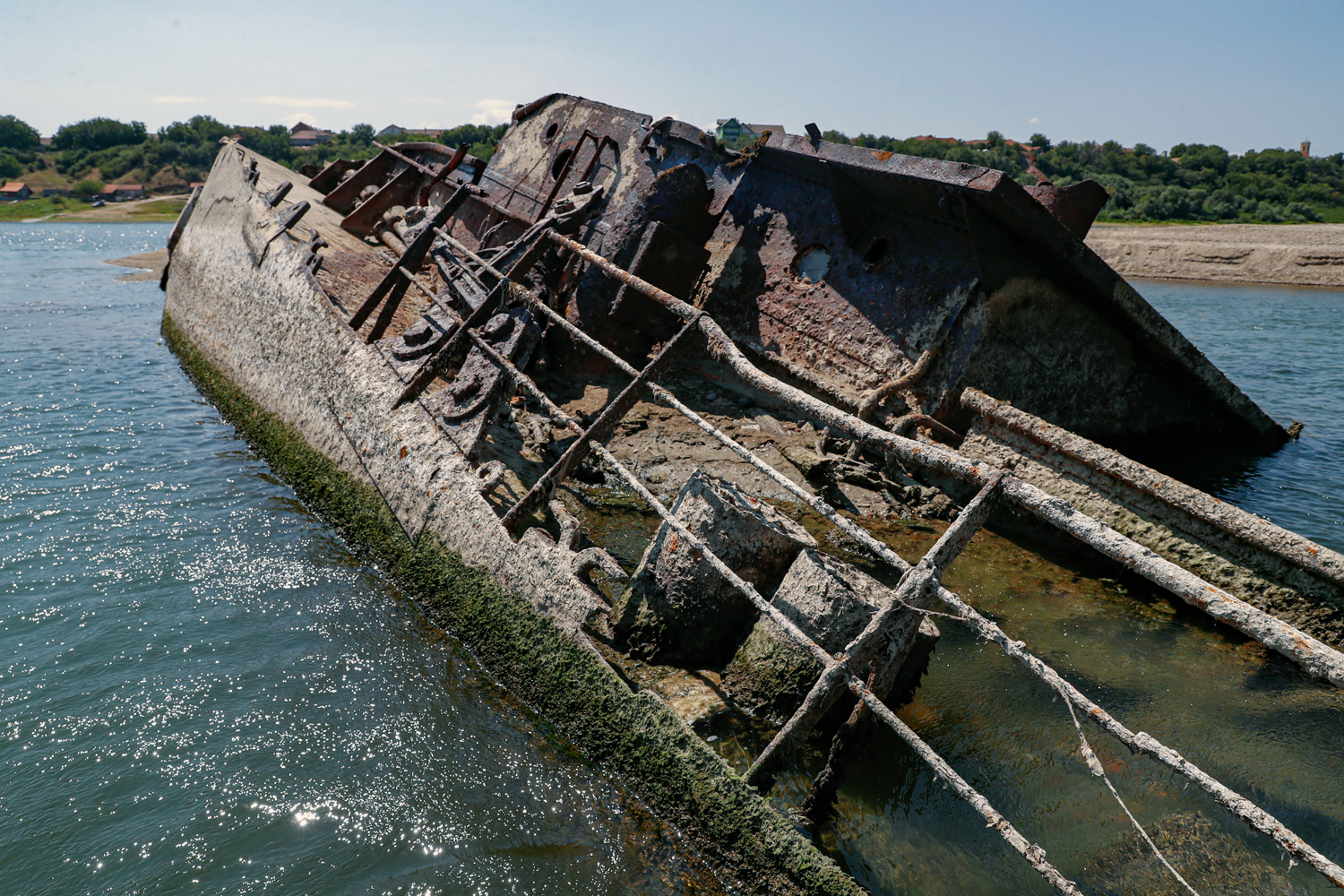 The project is an integral part of the European Commission’s investment package worth EUR 3.2 billion which includes 21 projects in the field of transport, digital development, climate and energy connectivity of the Western Balkans. This is the first large package of projects as part of the ambitious Economic and Investment Plan for the Western Balkans 2021-2027. 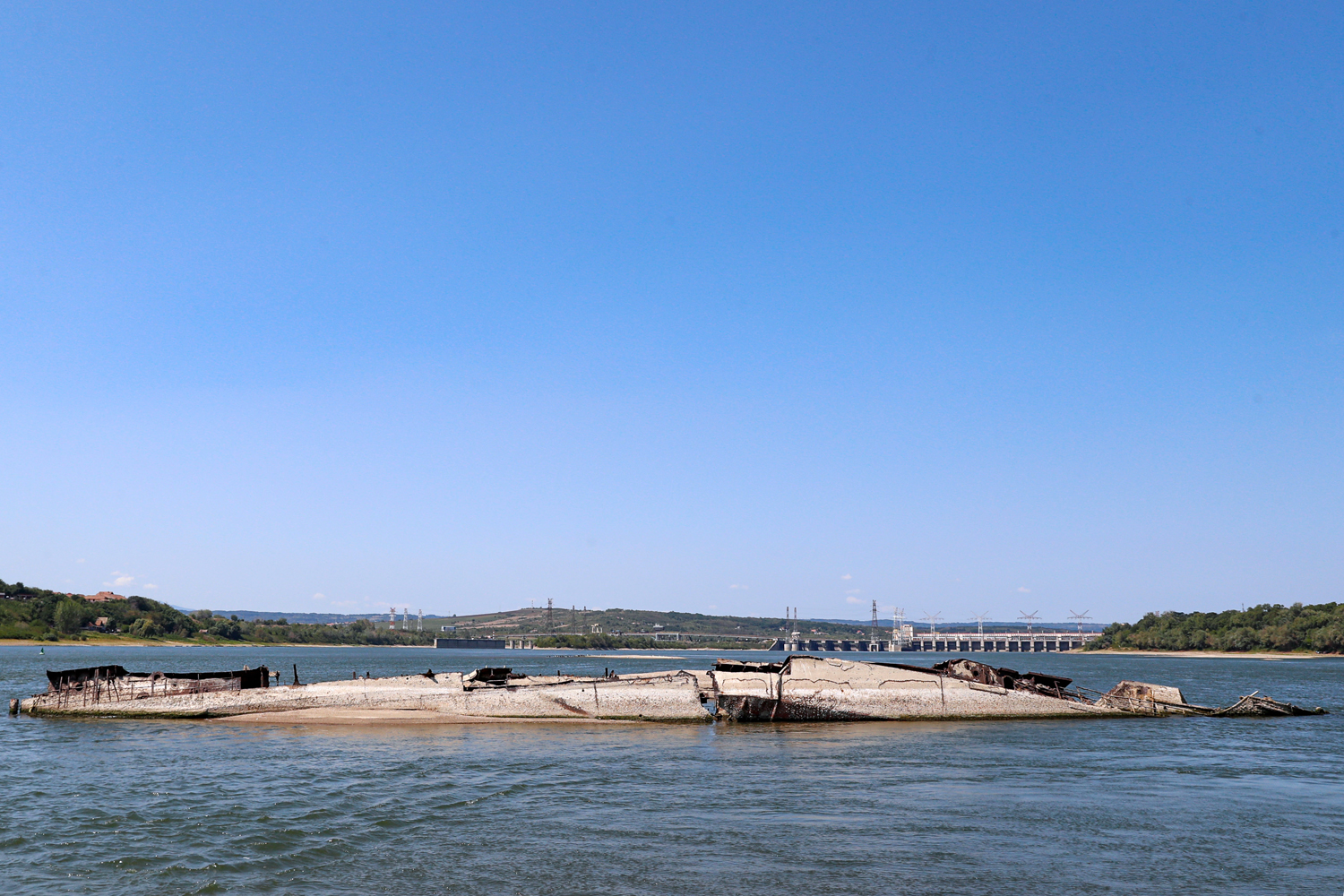 Modernisation of the Navigation Lock on Djerdap Financed by the European Union and the European Investment Bank:

Projects in the transport sector funded by the EU in Serbia aim to improve transport connectivity, and thus better economic integration within the region and integration of the region with the EU. In addition, the efforts that the EU invests in the transport sector through these projects are largely focused on market opening and the implementation of the EU standards. Projects funded by the EU have significantly contributed to the railway reform process, the introduction of modern and most cost-effective road transport infrastructure maintenance practices, and the introduction of a river information system in order to improve navigability on the inland waterways of Serbia.

From 2000 to this day, EU support to the transport sector in Serbia has reached more than EUR 420 million in grants. In addition, more than EUR 40 million of EU grants have been set aside for the preparation of strategic priority investments in the field of transport, with a total value exceeding EUR 3.7 billion, which will be realised as a combination of EU grants and favourable loans in the future.