When it comes to foreign films, Hollywood is the first thing that comes to mind. It occupies a nearly exclusive place in Serbian cinemas which makes it almost impossible to watch a film on the silver screen that was made some place other than Hollywood studios. Cinephiles would say that it is a huge drawback and the fans of the seventh art in Nis have the privilege to, in addition to expensive American features, watch highly artistic films from various European countries. This was made possible by the cultural centre Kupina, a member of the Europa Cinemas network. We talked to the director of Kupina Cinema Branko Krsmanovic about the screened features, the public interest for the European film and future plans. Kupina Cinema was founded in early 2012 in Nis and from the very beginning we have been trying not to become an average cinema which screens only blockbusters, but to offer our visitors an alternative cultural programme.

In the beginning, we experimented by organising the Kupina Fest, where we showed the best films from the FEST Film Festival in Belgrade and also with the rerun of the Kustendorf Film Festival, which turned out to be the right choice as it aroused great interest among citizens. At the time it seemed that there was a considerable number of people in Nis who wanted to know more about the European cinematography, but we needed to do some audience generating work.

“2013 was the turning point, when we became a full-fledged member of the Europa Cinemas Network and received support from the Eurimages programme in order to implement the project A European film year in Nis, together with our partners from the Media Centre, Reform Centre and Nis Cultural Centre. The project was implemented in 2014, comprising 33 different film cycles from a certain European country and public debates with film professionals on the subject of culture and cinematography of the country in question,” says Krsmanovic.

However, the end of the project did not mark the end of European films on Kupina Cinema screen. The public interest and the desire to set up this cinema and turn it into the home of European cinematography in Nis were enough to continue with the practice of screening European films. “We have generated an audience that regularly attends the cycles of different cinematographies, from teenagers to adults. In 2015, some 20,000 people have seen at least one European film, whereas in 2016 the number grew even bigger. We try our best to show as many different genres and subjects as possible, so that we could keep our existing audience entertained and attract a new one,” says the director of Kupina Cinema. 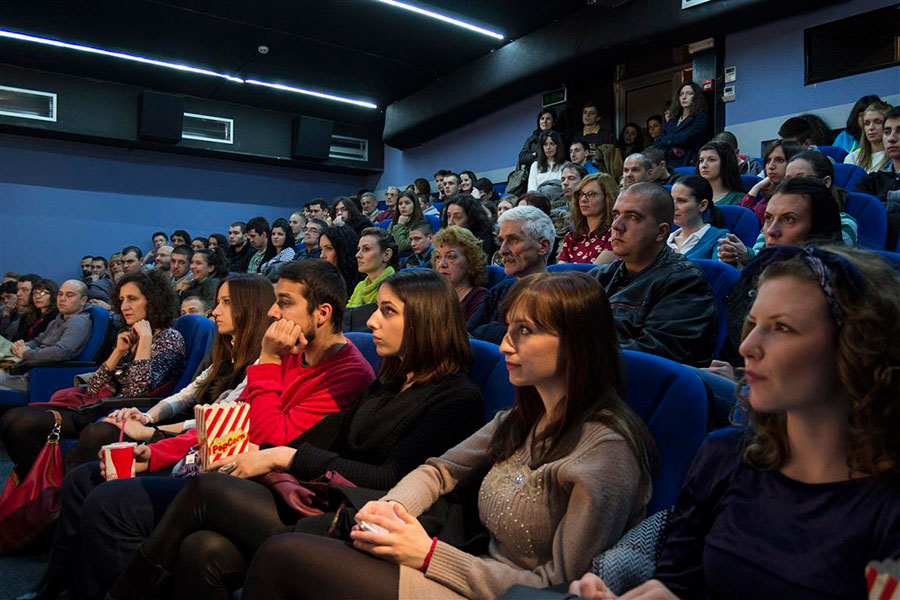 In order to become a member of the Europa Cinemas network, the quality of the institution’s work needs to be evaluated. The evaluation takes into account the promotion of European values and culture and the contribution to bringing European values closer to the people in the region where the cinema is located. “With this certificate, our cinema is now on the list of cultural institutions in Europe that promote the cultural heritage of the EU Member States. Also, through its fund, the Europa Cinemas network offers grants to its members to improve their business and opens up the possibility to apply for funding together other cinemas in the network.

“They [the network]pay a lot of attention to networking of its members and organise seminars several times a year across Europe where they gather all the cinema representatives in one place so they could share examples of good practice concerning the development of audience,” says Krsmanovic, who himself was an active participant in the seminars in Prague, Bologna and Sofia, where he presented to other representatives of the European cinemas his own way of working method with young audience, as one of the best examples in Europe.

We established cooperation with almost all European embassies and cultural centres in Serbia; they are our source of films. In 2016 alone, we screened Norwegian, Dutch, Danish, French, Spanish, Italian, Belgian, Slovak, German, Turkish and Greek features, but also short films from various corners of Europe. For some countries such as Italy, Spain or France, we can expect a great turnout, but we are always pleasantly surprised when we see a full auditorium for projections of Norwegian, Dutch or Danish films. According to the interest of the audience, we do our best to organise more cycles of films from those countries. We are very pleased to have taken part in the European Film Festival, organised by the EU Delegation and the EU Info Point Nis, two times at our cinema, and we are looking forward to hosting this significant Festival once again in South Serbia, Krsmanovic says.

The employees of Kupina Cinema, which was transformed into a cultural centre in 2016, wait happily for the end of the year with already developed plans for the next one. “In 2017, we will be committed to the development of audience, younger in particular and the promotion of European culture and values to the citizens of Nis. Besides the partnership that we have already established, we will try hard to bring to Nis the films hailing from some exotic, insufficiently promoted European country, to support young film-makers and festivals. The first thing that awaits us after the holidays is the prestigious Rotterdam Festival (IFFR Live) that will simultaneously take place in cinemas across our continent. This will be the third year in a row that our cinema takes part in this innovative event during which the citizens of Nis have the opportunity to watch European films together with cinephiles all around the world at the same time and to participate in live discussions with actors and directors,” says Krsmanovic. The citizens of Nis now only have to dress warmly, come to Kupina and for the price of only 100 dinars, over popcorn, see what European directors have to tell them.