Regular medical check-ups are the best method for prevention of breast and cervical cancer – said expert meeting held today in Nis, which gathered representatives of the Ministry of Health, the Public Health Institute Dr Milan Jovanovic Batut, the National Cancer Screening Office, the Clinical Centre in Nis and the Faculty of Medicine of the University of Nis, as well as health professionals from nine local self-governments included in the campaign “Find the Time”. The campaign is funded by the European Union, the Government of Switzerland and the Government of the Republic of Serbia through the European PROGRES development programme, and is implemented in Aleksinac, Babusnica, Bela Palanka, Brus, Gadzin Han, Doljevac, Knjazevac, Merosina and Svrljig with a view to raising awareness about the importance and early detection of breast and cervical cancer among women and encouraging them to undergo regular medical check-ups.

“Thanks to tireless efforts made by the Ministry of Health and the Institute and the hard work their staff has done to conceive and implement the prevention programme in concert with health and other institutions, we have laid a firm foundation for the implementation of public health policy,“ said Dr Vesna Knjeginjic, Assistant Minister of the Sector for public health and programmed health protection of the Ministry of Health which also helped to run the campaign „Find the Time“.

Thanks to a donation made by the EU and the Swiss Government, these nine municipalities have obtained new medical equipment for gynaecology wards worth more than EUR100,000 and free gynaecological  examinations have been offered to all women regardless of whether they had a health insurance card or not. Owing to strong commitment and engagement of the local health centres, in the period between 24 October and 2 November 733 women have underwent check-ups and the majority of them (208) came to Brus for screening.

“Such a response shows that with adequate public incentives and support, more women decide to undergo preventive check-ups. It is therefore necessary for national institutions and local self-governments, civil society and the media, as well as development programmes such as the European PROGRES, to further intensify efforts to raise awareness among women and create conditions for the provision of, and access to, health care, because the health of women is important not only for themselves and their families, but also for the society as a whole,” said Graeme Tyndall the European PROGRES Programme Manager and expressed his appreciation for the work done by local partners and health practitioners and their participation in and support for the implementation of the campaign. 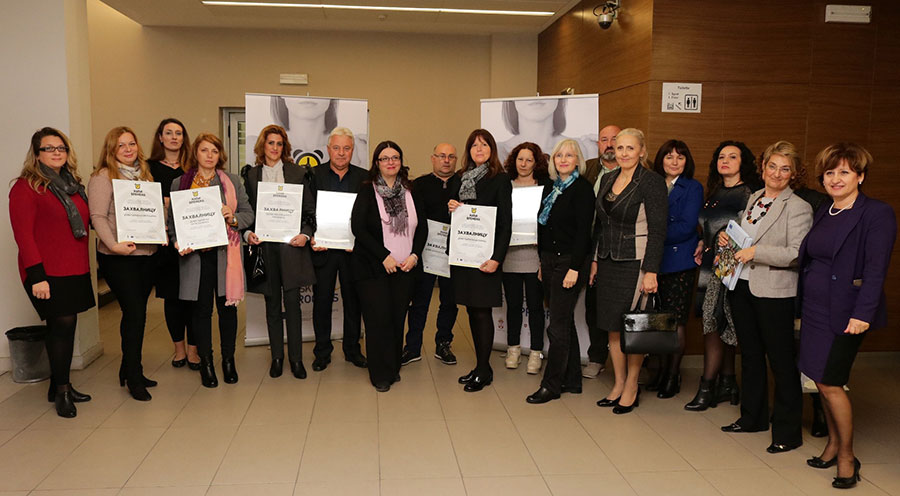 Anonymous surveys carried out during the campaign have demonstrated that as much as 36 per cent out of 1,254 female respondents were not seeing their gynaecologist regularly, while nearly five per cent of them had never had a gynaecological examination, due to fear or the lack of time or health insurance. Also, 28.6 per cent of women have never had a Papanicolaou test, which is a screening test for premalignant and malignant changes to the cervix. 25 per cent of them said they underwent the Papanicolaou test irregularly, once every three or more years. The statistics are a bit more favourable when it comes to breast examinations: according to the survey data, as much as 66 per cent of women perform self-examination of their breasts whereas 54 per cent of the respondents said that their gynaecologist also examined their breasts during regular check-ups.

“Serbia is ranked fourth in Europe when it comes to morbidity from cervical cancer, while in terms of mortality from these diseases it is ranked second after Romania. Combined with other risk factors, cervical cancer is a consequence of the Human Papilloma Virus infection (HPV infection) that occurs as a result of unprotected sex,” said Dr Katarina Boricic, Assistant Professor, on behalf of the Public Health Institute Dr Milan Jovanovic Batut, adding by the end of 2014, HPV immunisation programmes aimed at adolescent girls was implemented in 58 countries (some of which did the same for boys), 19 out of which are EU Member States.

Dr Snezana Pantic Aksentijevic Head of the Public Health Group at the Ministry of Health pointed out that next steps of the Ministry were to strengthen the role of local self-governments through health care councils and policy implementation in this field, education of health professionals and the general population as well as the promotion of health and healthy lifestyles.

MD-Ph.D Aleksandar Karanikolic Head of breast and endocrine surgery ward of the Clinical Centre in Nis stressed the importance of regular self-examinations as well as performing of regular ultrasound and mammography examinations, explaining that the majority of breast cancer cases are curable if detected at an early stage.

The expert meeting provided an opportunity to share experience, discuss challenges and set the course of future work towards prevention and early detection of cervical and breast cancer.

The campaign Find the Time, funded by the European Union, the Government of Switzerland and the Government of the Republic of Serbia through the European PROGRES development programme, aims to improve women’s reproductive health in nine municipalities covered by the programme – Aleksinac, Bela Palanka, Brus, Babusnica, Doljevac, Gadzin Han, Knjazevac, Merosina and Svrljig. Running in October and November, the campaign will seek to inform women about the importance of prevention and early detection of cervical and breast cancer and encourage them to undergo regular check-ups through a series of informative and educational activities and open days. Campaign is implemented with organisational and PR support from V+O Communication.