The COVID-19 pandemic has had a serious impact on the Roma community in Serbia. The majority of Roma in Serbia live in poverty, doing jobs that provide unsteady income, while their living and housing conditions don’t allow them to fully respect the preventive measures.

As a result, the Roma are facing even greater challenges. To help the Roma during the crisis, the European Union has, in cooperation with the UN Office for Project Services (UNOPS) and the Standing Conference of Towns and Municipalities—the Alliance of Towns and Municipalities  (SCTM), donated 2,800 humanitarian assistance packages worth EUR112,000 to Roma communities in Nis, Subotica, Valjevo and Belgrade. The delivery of the humanitarian assistance was a coordinated effort among four civil society organisations—Centre for Youth Integration (CIM) from Belgrade, the Association of Coordinators for Roma Issues from Valjevo, Roma League from Nis and the Roma Educational Centre from Subotica.

In cooperation with UNOPS, the EU has secured 2,000 assistance packages worth EUR100,000. Each package contained food (flour, sugar, oil, rice, and canned foods assortment) and hygiene items for the most vulnerable families in Belgrade, Valjevo, Nis and Subotica. The activity was carried out in cooperation between the Ministry of European Integration, Ministry of Construction, Transport, and Infrastructure, Ministry of Labour, Employment, Veteran and Social Affairs, and the Team for social inclusion and poverty reduction of the Government of the Republic of Serbia (SIPRU) as well as local crisis units, in order to ensure that the assistance reaches the most vulnerable citizens. 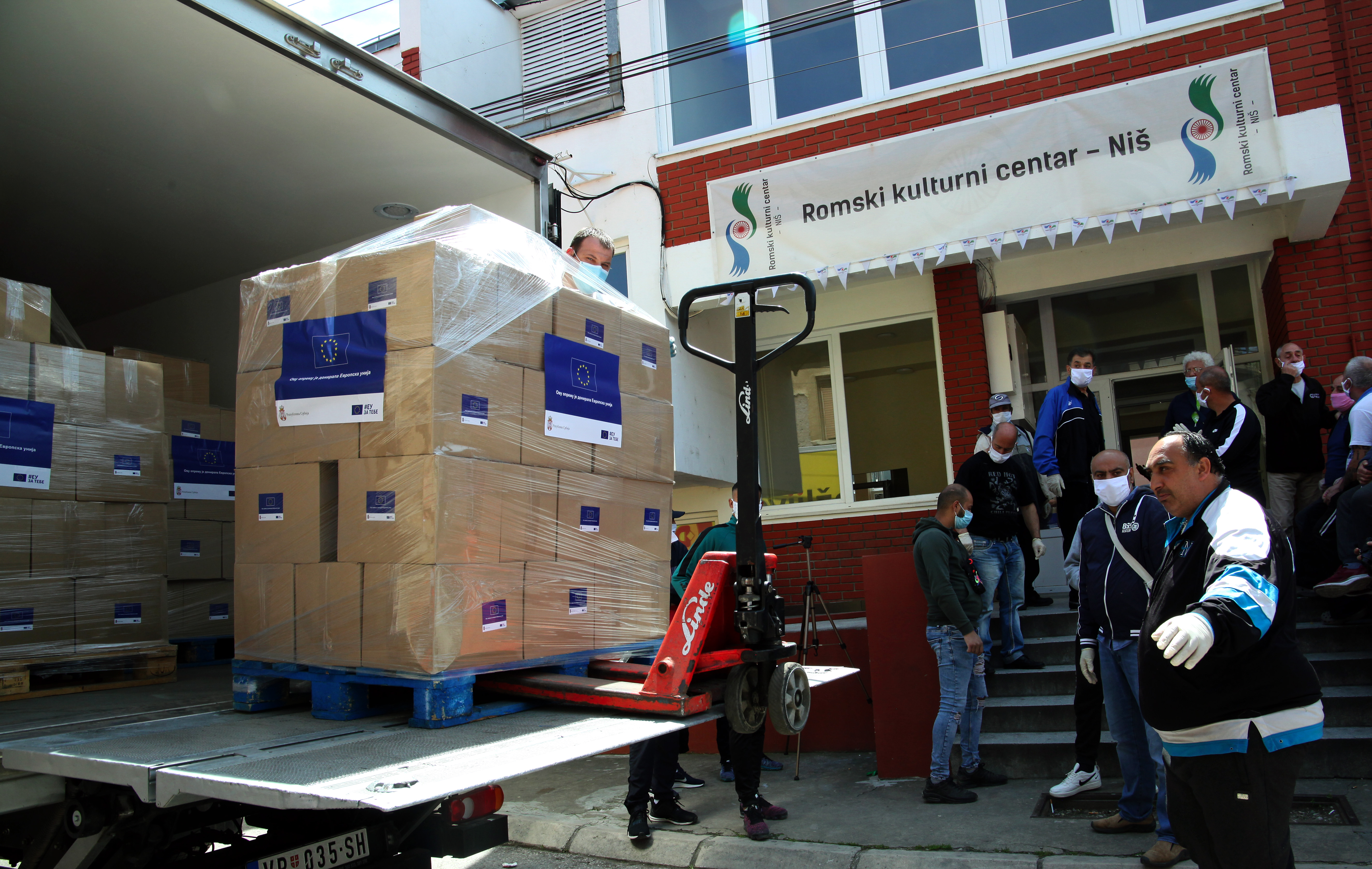 “Thanks to people in the EU, we received substantial assistance today; the 25,000 Roma in Nis needed this assistance. The pandemic has struck nearly the entire Roma community and our society. I wouldn’t single out the Roma if the majority of them didn’t work in the informal sector; around 70% of Roma live off secondary raw materials collection and, during the lockdown, they were practically left with no income. This is an opportunity to thank the European Union for its generous assistance; the packages were truly generous,” said Osman Balic, President of the Standing Conference of Roma Citizen Associations (SKRUG)—Roma League. Balic stressed that these thousand packages would be delivered to around 250 families: “If we assume that an average family has five members, then it means that 1,000 people in Nis alone will receive the assistance thanks to the EU and UNOPS.”

The European Union has, in cooperation with SCTM, secured 800 humanitarian packages worth EUR12,000; 300 of those packages will be delivered to Roma citizens in the municipality of Surcin. The activity was carried out within programme Support for Roma inclusion—strengthening local communities for Roma inclusion funded by the EU and implemented by SCTM since 2017. Various measures and activities have been taken to support the inclusion of Roma citizens at the local level. Among other things, this was achieved by setting up and developing local mechanisms; improving housing conditions; and through a grant scheme that promotes employment and anti-discrimination of Roma community members in Serbia. 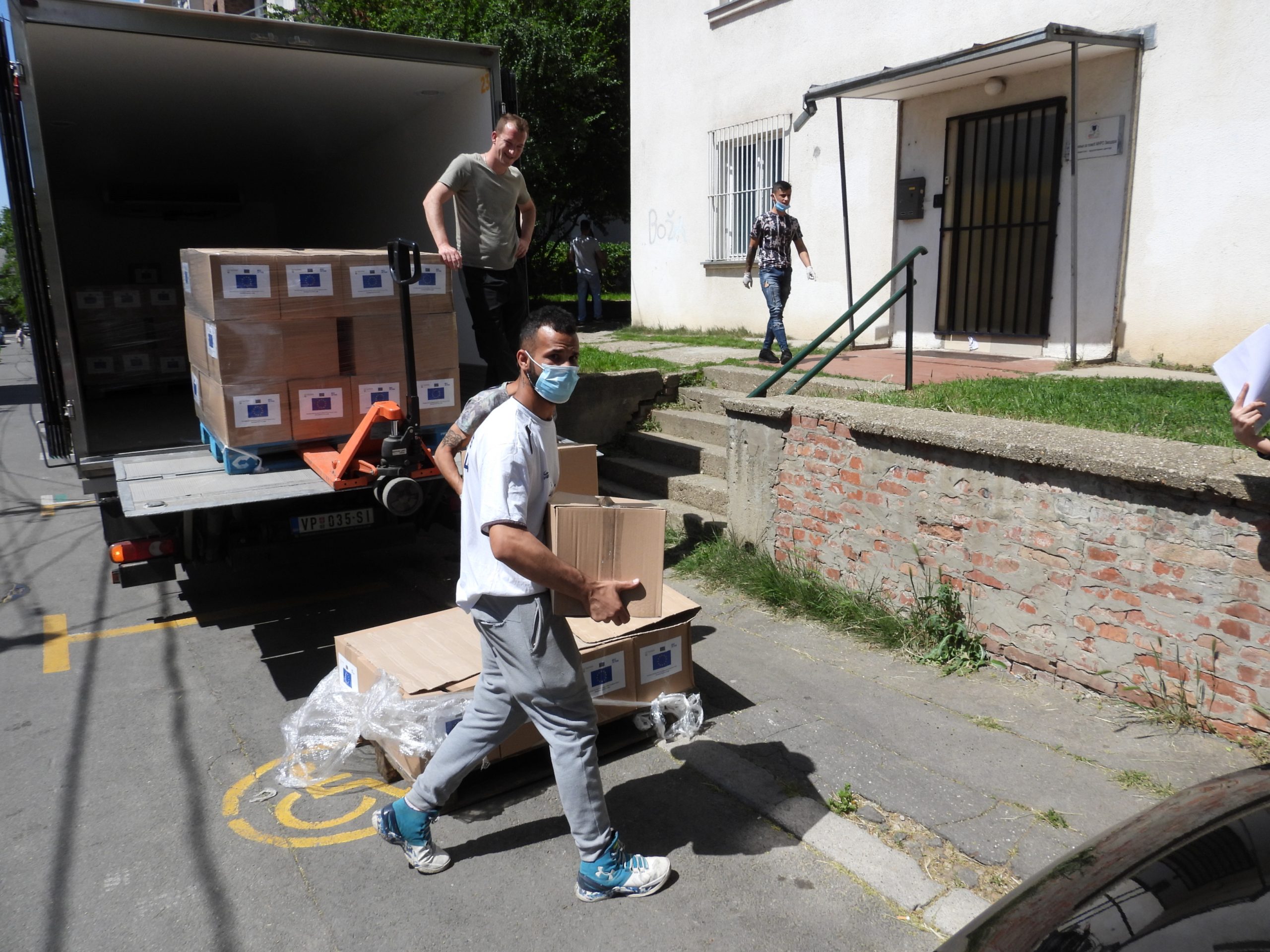 “In the light of this situation and the global pandemic, in coordination with the European Union and public authorities at the central level—and by assessing the needs of towns and municipalities with Roma populations—it was decided to take urgent action to support the most vulnerable,” said Natalija Matunovic Milosevic, Programme Manager of EU support for Roma inclusion, adding that emergency situations hurt the most vulnerable more than anyone else.

“Only a joint effort by the central government, local self-government units, and the donour community can have an impact on our fellow Roma citizens,” Matunovic Milosevic noted.

President of Surcin municipality Stevan Susa stressed that the assistance meant a lot for his fellow Roma citizens.

“These packages have everything a family needs for 15 days. I would like to thank the European Union for supporting this financial measure.“

The European Union has thus far invested over EUR30 million in Roma inclusion projects, implemented in cooperation with the Government of the Republic of Serbia, local self-governments, and civil society organisations. Thanks to EU support, the number of entries in the birth registry has increased, access to fundamental rights has been improved thanks to newly established mobile units, while the provision of grants has helped to strengthen Roma civil society. Also, specific activities have been carried out with the goal to improve the housing situation of the Roma community in several towns and municipalities in Serbia; find the most appropriate employment models for Roma; while special attention was paid to achieving permanent inclusion of Roma students in high schools. Since 2011, the European Commission has organised seminars dedicated to the social inclusion of Roma and the improvement of their status.