The opening conference of the project “Support to the State Aid Control Commission”, funded by the European Union with almost €1 million from pre-accession funds, was held today in Belgrade.

The conference marked the beginning of the two-year project that should provide further support to the Government of the Republic of Serbia, and in particular the existing state aid control and granting institutions, in harmonising rules and procedures in this area with the EU acquis. The project is managed by the Ministry of Finance, and the main recipients are the Ministry’s Department for State Aid Control and the Commission for State Aid Control. One of the project’s key messages is “Think State Aid First”, the essence of which is that state aid control rules should be included in the earliest planning stage within institutions.

„This project will substantially contribute to Serbia’s progress in the process of accession to the European Union. When we speak about negotiations, alignment of regulations with the new EU state aid rules represents the first out of six opening benchmarks for the Chapter 8. The Ministry of Finance included drafting a new law on state aid control and relevant bylaws in its working plan for the year of 2019. It should bring us closer to the improvement of administrative capacity, but firstly the strengthening of public expenditure, and to have an impact on economic and social growth,” Mrs Jelena Tanasković, the Ministry of Finance State Secretary said in her opening address.

Head of Operations II in the Delegation of the EU to the Republic of Serbia, Mr Steffen Hudolin said taht the project Support to Commission for State Aid Control was an integral part of the framework for negotiation.

“Serbia has been assisted in different ways by the European Union, and this is the one of the EU funded projects that is substantially supportive in preparing Serbian administration in its negotiations path for the EU membership. We hence view this project as a support in particular in achieving opening benchmarks, but at the same time in a more general context to strengthen the whole state aid system with the view to optimise the use of budgetary resources and be an efficient tool to foster investments, economic growth and job creation fulfilling the essential principle that state aid should be granted at the lowest possible costs for citizens at whose expense it is provided,” Mr Hudolin said. 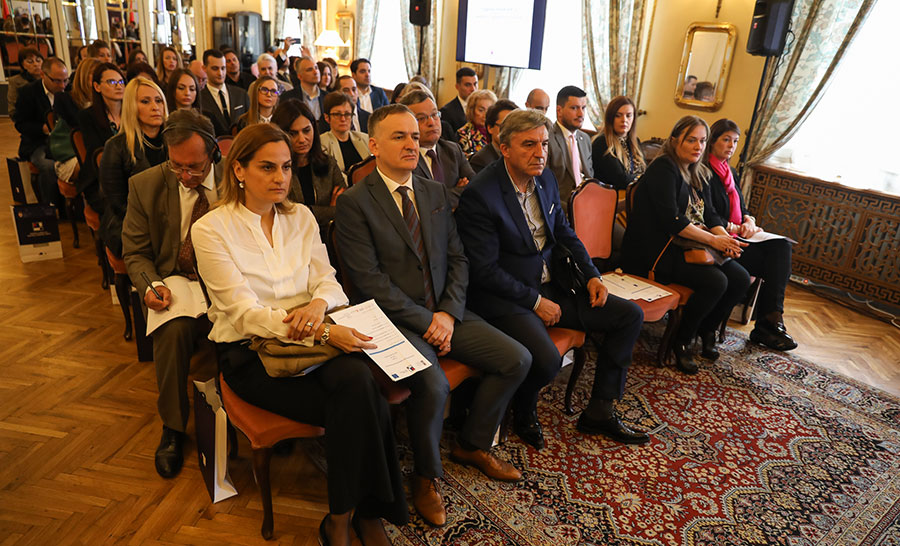 Chairman of the Commission for State aid Control of the Republic of Serbia, Mr Vladimir Antonijević said that the Government of the Republic of Serbia has confirmed its full committment to fullfiling the Chapter 8 opening benchmarks, by, among others, drafting a new law on state aid control, as well as bylaws, which all will lead to the full allingment wih the EU rules.

Deputy Chairperson of the Competition Council of the Republic of Lithuania, Mrs Jūratė Šovienė,  shared her country experience in the field of state aid control.  “Support to the Commission for State Aid Control is a unique opportunity for the Lithuanian competition authority to transfer the best professional experience to foreign colleagues. We feel confident that in collaboration with our external partners and beneficiary we are going to make positive changes in the field of state aid in Serbia” Šovienė said.

The process of allingment of state aid rules with the European Union rules in the field is not the aim per se, the project’s Team Leader Mrs Radmila Mihić said. „All the benefits that Serbia gets if it harmonises its rules with the EU rules are the essence of the process. What we are speaking about is to have lower levels of crony economy, better business environment and better life standard for Serbian citizens,“ Mrs Mihić concluded.

The project has started in February 2019 and will last until February 2021, with the budget of €999,000. As part of project activities, Serbian state aid control experts will share their experience with leading EU experts in the field. For the first time, trainings in the field of state aid will be organised for all of the 174 local self-government units in Serbia. Also, a new inventory with existing state aid schemes will be drafted, as well as a manual for the implementation of state aid rules. In total, 12 trainings on state aid control rules and procedures will be organised in several cities across Serbia.

The project is implemented by the consortium led by Alternative Consulting in cooperation with DMI France and Competition Council of the Republic of Lithuania.