The finale of the European Debate School, participated in by high school students from towns across Serbia, took place on 24 May at the National Assembly of Serbia which served as a scene for the discussion about whether the European Union should be taking a multi-speed approach to development.

The fourth European Debate School, organised by the EU Info Centre and NGO Open Communication, with support from the EU Delegation to Serbia, brought together high school students, young people aged from 15 to 18 years who want to know more about the process of EU integration and test their debating skills.

EUROPEAN DEBATE SCHOOL – FROM BELGRADE TO THE REST OF SERBIA

In four years, the European Debate School project has expanded from being implemented exclusively in Belgrade and the places nearby to the whole of Serbia: students from as much as 38 cities and towns from the north to south of the country have participated in the project. In total, 76 preparation workshops and 21 qualifying debates have been held in 13 cities. As Serbia advanced toward the EU, the European Debate School grew as well; Team Europe Serbia, the network of national experts dealing with EU policies, whose members acted as lecturers, proved to be a valuable resource of information about the Union.

In its latest edition, the European Debate School gathered 70 high school students from 23 towns and cities, including Belgrade, Nis and Novi Sad. Since November 2016, they have been acquiring both the knowledge about European integration and debating skills, under the guidance of Team Europe Serbia members and adept debaters from the Open Communication.

Students had participated in public debates in several towns before the top six finalists took part in the showdown titled “Should the EU take the multi-speed approach to development” or keep the things as they are.

THE EU IN THE FUTURE: SINGLE- OR MULTI-SPEED? 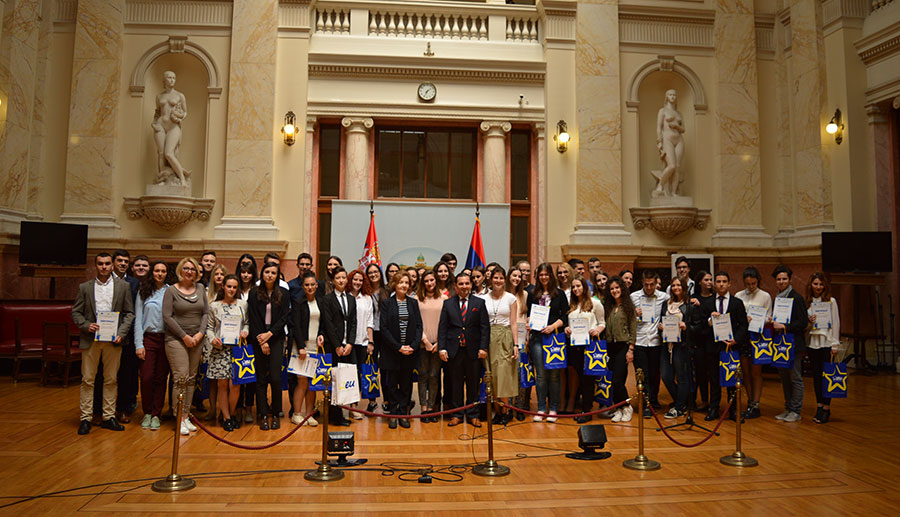 Divided into two teams – “the government“ team, advocating two or multi-speed approach, and “the opposition“, that believes that no changes should be made to the current state. The two crews listened to each other’s arguments before a three-member jury and the audience consisting of their peers, participants in the European Debate School.

“The government“ team, consisting of Jovana Tesic from Novi Sad, Nina Stojanovic from Belgrade and Marija Jovanovic from Medvedja, advocated the idea that dividing the Union into smaller blocks, which would be a direct result of the multi-speed approach, would be beneficial for all members of the Union, both rich and the less developed ones.

Also, they pointed that deeper integration within the Union is possible and that multi-speed enlargement islegally enabled by the Treaty of Lisbon. They also argued that multi-speed approach to development, adapted to fit the level of development of each country group, would undoubtedly reduce the Euro scepticism.

“The opposition“ team, made up of Aleksandra Stamenkovic from Nis, Danilo Mladenovic from Belgrade and Sonja Jovicic from Novi Sad, claimed the contrary: that the EU, if it failed to act as a whole, would lose its importance on the global stage, that the “multi-speed“ approach would make the decision making process more difficult at the EU level, that it would make the Euroscepticism grow and limit the enlargement of the Union.

We believe that enlargement is more important than having a deeper integration, they said. As an example, they cited the Common Foreign and Security Policy and the current issue of sanctions against Russia: they argued that, should the multi-speed approach be taken, then different Member States could take different stances, which proves that the multi-speed approach would have adverse effect on the Union.

Three-member jury, consisting of the Deputy Speaker of the National Assembly of Serbia Vladimir Marinkovic, the current world debating champion Teodora Resetar and the EU Info Centre Team Leader Ljubica Markovic, agreed that both teams had prepared for and performed in the debate extremely well, but nevertheless ruled in favour of “the government” team with 2:1 votes.

Deputy Speaker of the National Assembly of Serbia Vladimir Marinkovic said that the Parliament had for years been hosting the debate finales thus supporting that result-yielding project. He said he was hoping that some of the debaters would become future MPs and congratulated the participants on the very successful performance because, as he put it, “debating about Ukraine and the Common Foreign and Security Policy at the age of 18” is impressive and speaks volumes about participants.

GAINING KNOWLEDGE FOR THE FUTURE 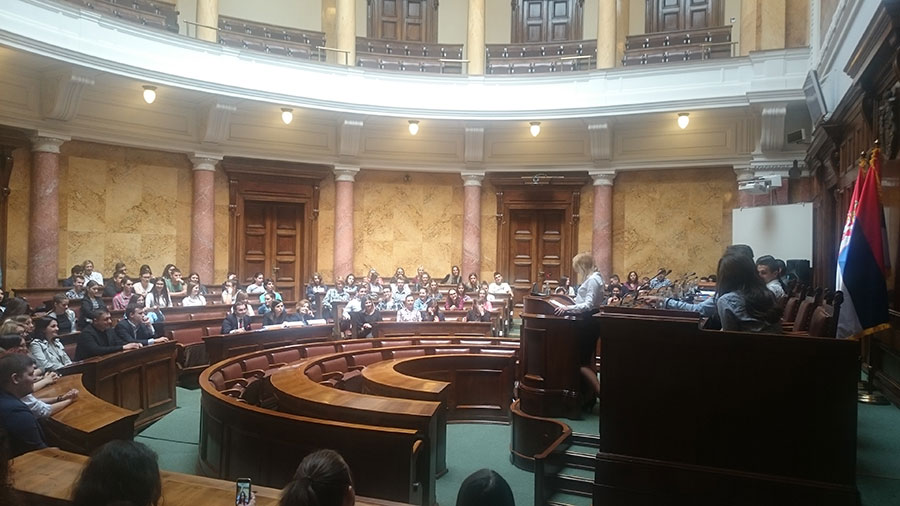 After the debate, third year students Jovana Tesic from Novi Sad, a member of the winning team, told FoNet that she and her fellow colleagues had learned a lot, not only when it comes to debating, but also about how to speak in public and answer questions about the issues they would deal with later on.

Nina Stojanovic from the winning team said that all participants have “gained new knowledge and prepared themselves for the finale thoroughly.” “What matters the most is that we can apply the newly-gained knowledge to the real life. No doubt debating skills are important, meaning that we can make use of it regardless of our job in the future,” she said.

“Seeing these young people aged 17 or 18 years, who are the future of the political, economic and cultural life of our country, motivates us politicians to engage with the youth even more,” Deputy Speaker Marinkovic said during an informal gathering with debaters, after taking a photo with them in the Hall of the National Assembly.

Video of the debate available at: https://www.youtube.com/watch?v=u0ZkV-u5X4I

The topic of the debate has been chosen to reflect the 60th anniversary of the Treaties of Rome and the debate itself was part of the campaign aimed at young people and spearheaded by the EU Info Centre with the support of the EU Delegation to Serbia which ran from late March to late May 2017 (for more information about the campaign, visit: www.euinfo.rs.