EP Delegation Chair Tanja Fajon calls on Serbia to implement concrete electoral reforms and invites opposition parties to take part in the 2020 elections. MEPs and Members of the National Assembly of the Republic of Serbia met in Belgrade on 30-31 October for the 11th meeting of the EU‑Serbia Stabilisation and Association Parliamentary Committee.

MEP Fajon and the Serbian Parliament MP Vladimir Orlic (Serbian Progressive Party) co-chaired the meeting. Parliamentarians held in-depth and fruitful discussions on a number of important issues, including the implementation of the EU-Serbia Stabilisation and Association Agreement, Serbia’s progress in rule of law areas, the Dialogue between Belgrade and Pristina, progress in implementing government commitments on electoral reform in order to improve the conditions for the 2020 elections, and the enlargement perspective. 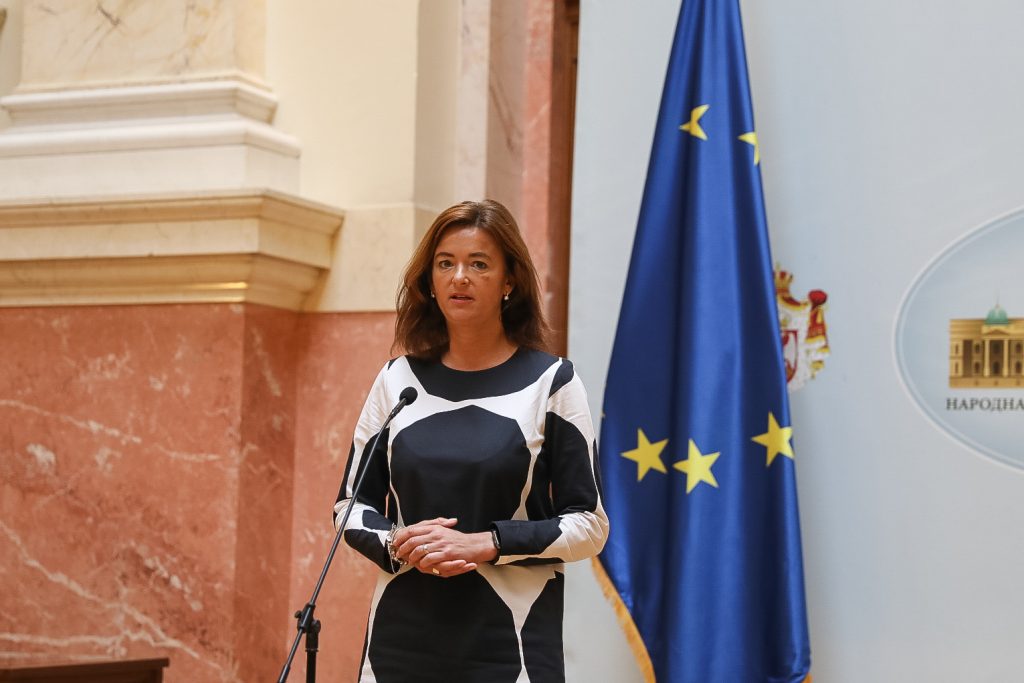 Ms Fajon underlined the urgency to implement the concrete proposals to improve conditions for holding parliamentary elections put forward by the Government and included in the conclusions of the first round of the Inter-Party Dialogue (IPD), launched and facilitated by the European Parliament in co-operation with the National Assembly of Serbia.

The EP Co-Chair called on all parties to accept the invitation from the European Parliament and fully engage and constructively participate in the upcoming second round of the Inter-Party Dialogue. She underlined that the Conclusions of the first IPD clearly stated that further steps are necessary to improve the conditions for holding the 2020 elections, in particular creating a level playing field for all political parties participating in the elections, including having equal access to media and especially to the public broadcasters.

Violence, intimidation against journalists should not be taking place in a country aspiring to join the EU. #Serbia needs pluralistic media landscape with safeguards to protect journalists. I firmly condemn any interference in the work of media, incl in the context of elections. pic.twitter.com/sANJlRu29f

She welcomed the scheduling of a hearing in the National Assembly on 12 November on the role and conduct of the Regulator of the Electronic Media (REM) and called for all parties and stakeholders to participate fully to ensure that clear and concrete proposals are put forward on improving the role and conduct of the REM and media environment. She went on to say that all proposals should be subject to full parliamentary scrutiny and in line with OSCE/ODHIR recommendations. She said she looked forward to taking part in the 2nd Inter-Party Dialogue.

MP Orlić said that the adopted declaration emphasized unequivocal support for Serbia’s European integration, and that the Serbian and European Parliament jointly called for the opening of technically prepared chapters for EU accession.

“We reiterated the common message that the assembly is a place where dialogue should be conducted, and we welcomed the participation of the European Parliament in inter-party dialogue,” Orlic said.

The 12th EU-Serbia SAPC meeting is expected to take place in Strasbourg on 8-9 July, 2020.

Meetings of the MEP Delegation and the Serbian State Officials

MEP Delegation met earlier with the Serbian President Aleksandar Vucic. President Vučić said that Serbia welcomes the election of Vladimír Bilčík to the position of the new European Parliament rapporteur for Serbia and expressed gratitude to his predecessor David McAllister for his contribution and active support to the European integrations of Serbia.
„Serbia seeks peace and stability in the region, while regional cooperation, strengthening of relations with neighbours and continuation of the reconciliation policy will continue to be our foreign policy priorities”, emphasised President Vučić and added that Serbia attributes high importance to the Berlin Process, whose significance reflects in providing support to the European integrations of the Western Balkans through concrete projects and measures. 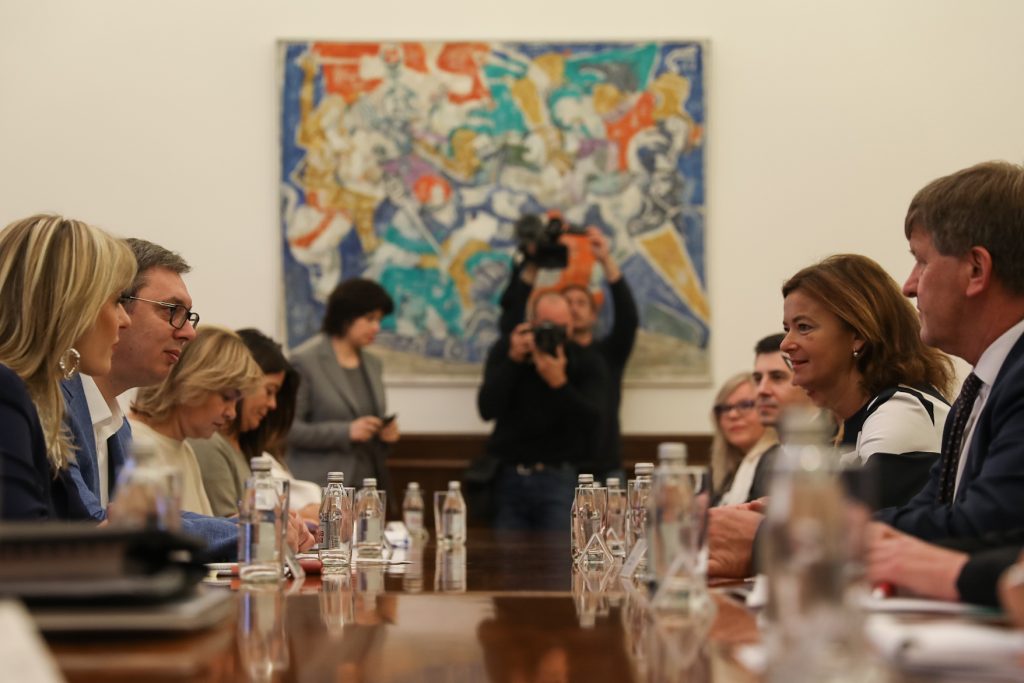 MEP Fajon said that the European Parliament seeks the EU enlargement and that Serbia remains to be the frontrunner. She congratulated for the economic successes of Serbia and thanked for the possibility presented to the European Parliament to mediate in the dialogue between the authorities and the opposition. Fajon expressed her concern regarding media freedom but also congratulated for the creation of the media strategy.
„The European Parliament will continue to actively support the EU enlargement policy and will advocate the Serbian approach as the best manner to advance in the European integrations“, said Fajon and added that she expects the European Council to alter its decision regarding North Macedonia and Albania and that it will convey a positive signal to these countries before the EU-Western Balkans Summit to be held in Zagreb, the Serbian President office announced.
Serbian Prime Minister Ana Brnabic also met the EP Delegation and the focus of the talks was further cooperation on the Serbian path to EU membership. 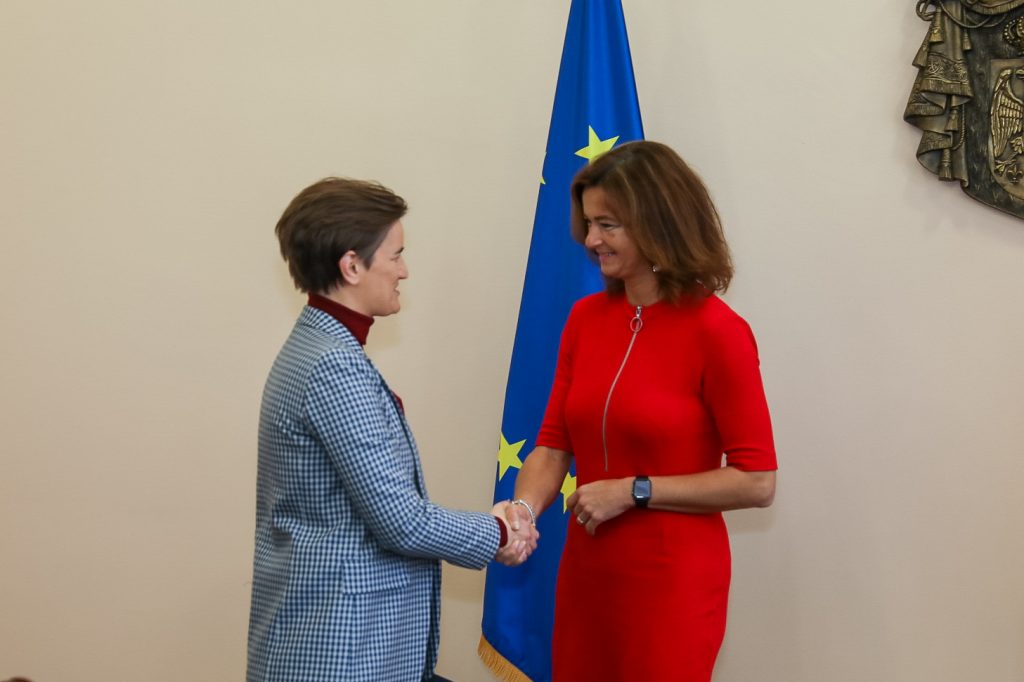 PM Brnabic thanked the EP Representatives on engagement this institution showed in facilitating the Election conditions dialogue, adding that this kind of support is very important.