The Pulse of Europe in Albania: Tirana is this year’s European Youth Capital

Journalists from seven media outlets and representatives of five non-governmental youth organisations from Serbia visited Tirana, European Youth Capital for the year of 2022, at the beginning of July, as part of the Pulse of Europe – Media Trips to EU project. The visit was prepared in close cooperation with the EU Delegation in Albania. The six-day visit involved journalists from the RTS and N1 televisions, the daily newspapers Danas and Blic, the Nedeljnik magazine, the Beta News Agenc and Radio Belgrade 1, as well as one representative each of the Youth Initiative for Human Rights, the Belgrade Open School, the European Movement Youth Forum, the Institute for European Affairs and the Center for Contemporary Policies.

After Novi Sad three years ago, Tirana is the second city in the region to receive the title of European Youth Capital. The young people from the Albanian National Youth Congress (Kongresi Rinor Kombëtar – National Youth Congress of Albania) are to be praised for this. The celebration is carried out through eight different programmes in which young people present their ideas for the further cultural and economic development of the city. As many as 1,000 events were organised in Tirana and other Albanian cities.

Participants from Serbia had the opportunity to attend the beginning of a project of empowering young people from Albania by liaising them with the academic community in Europe at the headquarters of TEYC (Tirana, European Youth Capital). According to Irena Topalli, from the Albanian National Youth Congress, at least one event is organizsed every day in the new TEYC premises and “it’s always crowded, which is good”. She pointed out that the experience of Novi Sad was very useful: “As of our submission of the application, we have been in contact with colleagues from Novi Sad, with whom we have been cooperating for years. We are very grateful to them for sharing their experience with us and for pointing out the mistakes they were making so we could correct them.” In the report of RTS more about what young Albanian politicians say.

As part of the visit, a workshop was held with Albanian youth organisations where they discussed three topics with guests from Serbia – activism, democracy and youth participation. In the meeting with the representatives of the Beyond Barriers organisation, it was presented what Albanian youth organizations do for socially vulnerable groups. More in the Radio Belgrade 1 report.

That Tirana is the capital of youth can be seen in all everywhere – its symbol, the lowercase letter “t”, is put even on traffic lights. It is the city with perhaps the highest percentage of young people among the inhabitants in Europe, and according to the Mayor Erion Veliaj, it is now a cosmopolitan city.

“Tirana went from being the most isolated city in Europe to a city with 144 nationalities. It’s a cosmopolitan revolution in one generation. We want to preserve that reputation, and this title (EYC) contributes to that. It also increases the income of everyone in the city. Our goal is to take advantage of this moment,” Veliaj said.

In the meeting with the Mayor, the participants heard that Tirana is also on the path of green transition – it is planning more than the current 54 kilometers of bicycle paths, driving cars out of the city center, and there are already solar panels in the bed of the Lana river.

Tirana is also the seat of the Regional Office for Youth, the popular RYCO. General Secretary Albert Hani and his colleagues welcomed the participants from Serbia and presented the results of the six years of the initiative for improving the position of young people in the Western Balkans: 112 projects and 30,000 young people who participated in RYCO activities. 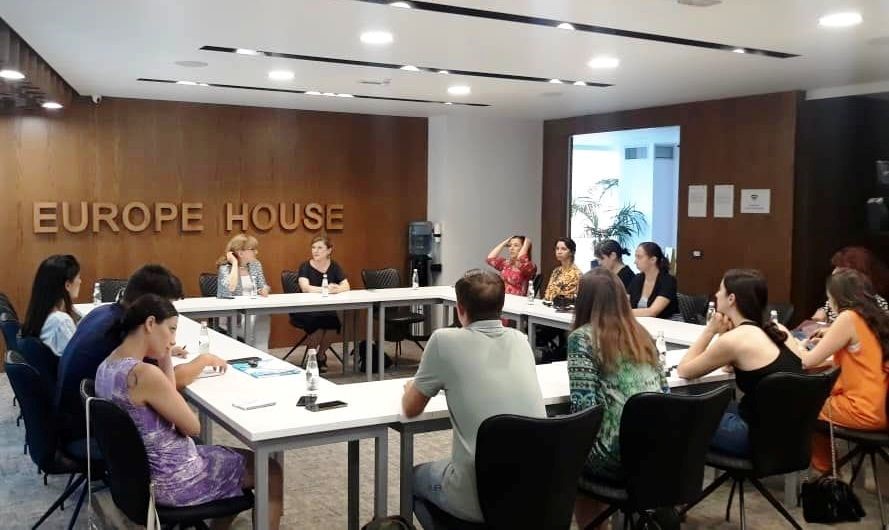 The European House is the second place where events are held as part of the TEYC celebration. Journalists from Serbia toured it and spoke with representatives of the EU Delegation, as well as Prime Minister’s advisor Odeta Barbullushi. The main topic of discussion was the Open Balkans initiative, which, in her opinion, will speed up the Berlin process. N1 television published an interview with Mrs. Barbullushi.

Journalists explored Tirana, a city that today is difficult to compare with what history teaches about the former Albania, and whose traces are still visible as bunkers on the city streets and in the surrounding area. More about it in the Nedeljnik report and the article published in Blic.