Tunnel and ring road open near Golubac Fortress thanks to EU

After more than 80 years, the traffic was today reallocated from the Golubac Fortress thanks to efforts made by the European Union, Austrian Development Agency and Serbian Government. The value of construction of the 760-metre road section is EUR2.3 million.

Vucic: Regulation of the Fortress would not be possible without EU money 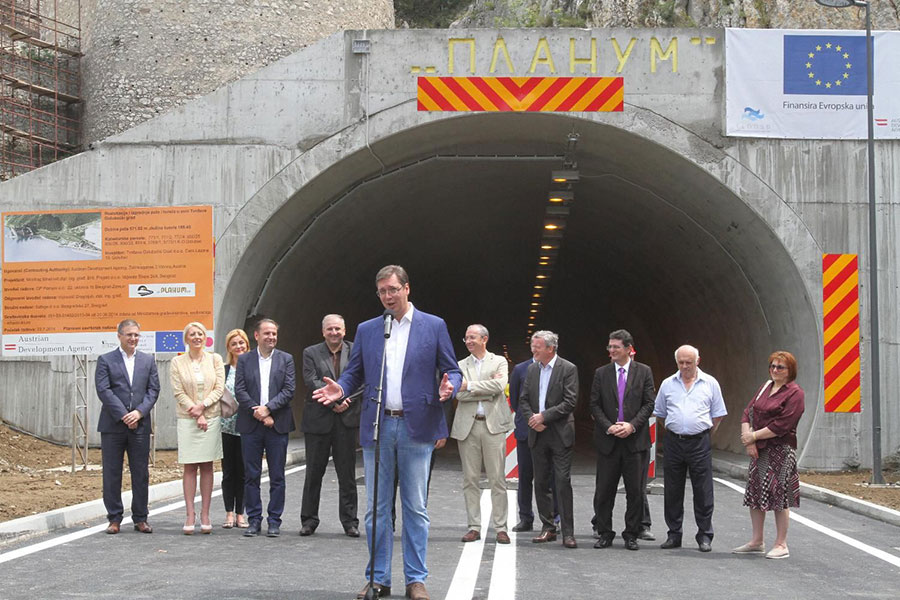 The tunnel and the ring road were officially opened by Prime Minister-designate Aleksandar Vucic, Head of the EU Delegation to Serbia Michael Davenport and Austrian Ambassador in Belgrade Johannes Eigner.

Vucic said Eastern Serbia had great development potential and that the Danube River Basin stretch from Kladovo to Smederevo deserved a special treatment. “The Danube belongs to majority of European nations and our desire is to use investment to bring Eastern Serbia back to life,” he said.

He thanked the EU for its support and added that “regulation of the Fortress would not be possible without EU money.”

“We have received a large sum of money – EUR6.5 million,” Vucic said and added that the Danube needed greater tourist offer and more bathing areas. 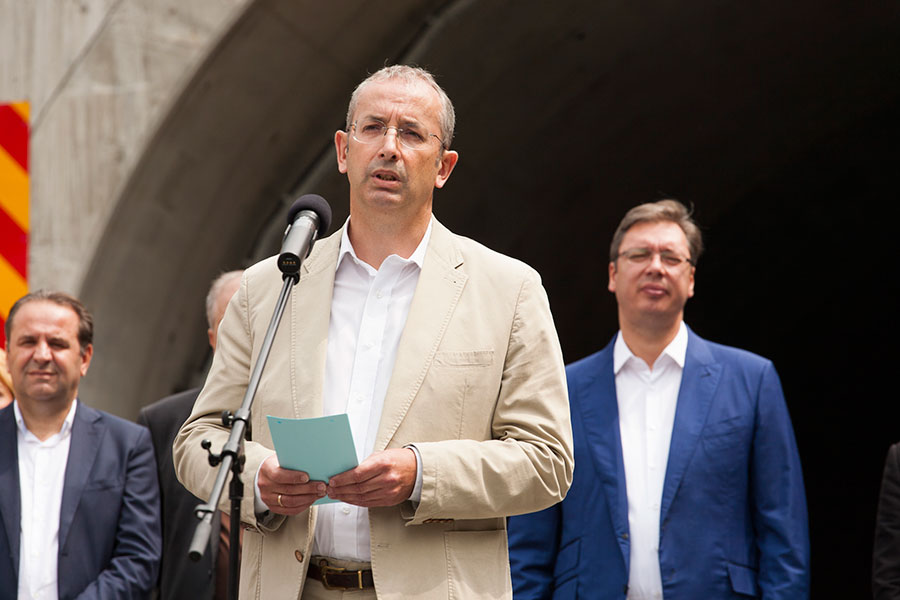 “The Fortress is among the most beautiful gems of the Danube, a part of both Serbian cultural heritage and our common European culture. I visited the Fortress for the first time six years ago, as a tourist, and today I am happy to see all the work done,” Davenport said.

He added the EU was proud of being able to make the donation of EUR6.5 and help Serbia implement the project and, particularly, to assist it in the development of Danube River Basin.
The ring road and the 150-metre long tunnel form a section spanning 760 metres in length. The width of the two-lane roadway is 7.65 metres, whereas the height of the tunnel is 6.26 m. The total value of the construction is EUR2.3 million and the contractor of the project was Planum a.d.

A visitors centre of 961 square metres of surface area, designed for the reception of visitors and presentation of the Golubac Fortress complex, has also been built within the EU project “Reconstruction of Golubac Fortress.”

Ljajic: Completion of works by December 2017 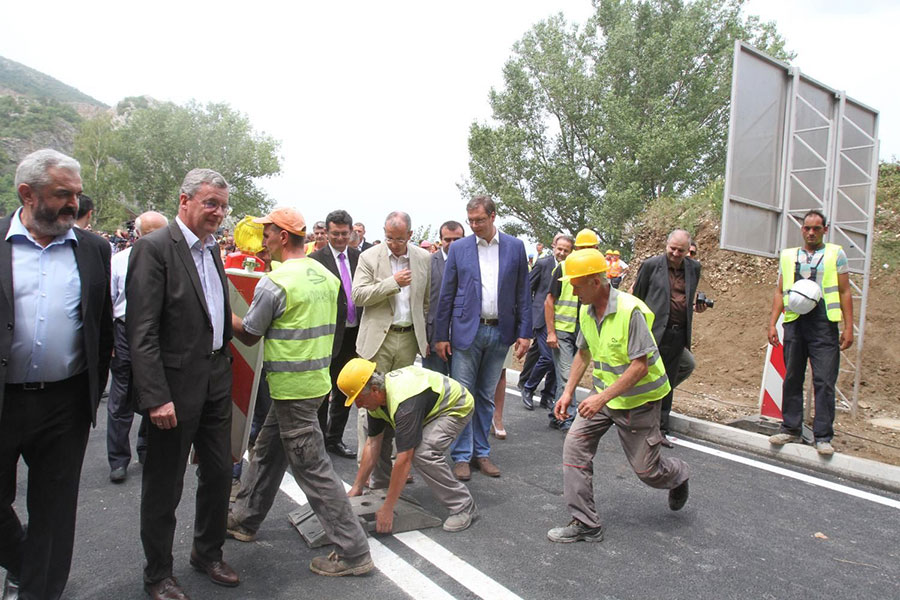 Serbian Minister of Trade, Tourism and Telecommunications Rasim Ljajic said the project of Golubac Fortress reconstruction should be completed by December 2017, with Serbia expecting EUR2.1 million of IPA funds for its implementation.

Following the commissioning of the tunnel and ring road around Golubac Fortress said the reconstruction of the Fortress was delayed as the project differed from the actual situation on the ground.

A transformer station and water supply facility have also been constructed within the project. Archaeological study has been conducted as well as works to protect excavated facilities: Turkish hammam, Roman house, limekiln and the newly found facilities beneath the old road.

Among other things, walking trails around and along the coastal defence have been regulated. Also, a large parking lot for buses and cars, as well as bicycles, has been reconstructed. The existing tunnel of the quarry has been adapted and now serves as an underground passage for pedestrians beneath the highway. Along the coast of the Danube near the Golubac Fotress, coastal defence spanning 430 metres in length has been erected as well.

Eigner: Austria is doing everything to be friends with countries of the Danube basin

Minister in charge of European integration Jadranka Joksimovic said the beginning of reconstruction of Golubac Fortress was the best example of how EU funds might give a development chance to a region.

“The Danube is a river that connects, the river of cooperation, and Austria is doing everything to be friends with countries of the Danube River Basin,” he said.

ЕU is dedicated to development of the Danube region 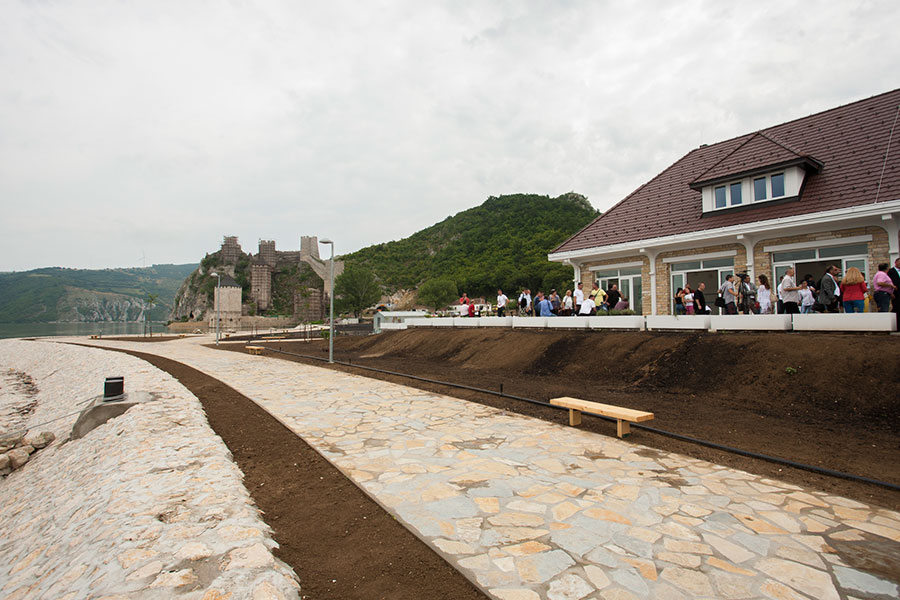 The project was launched on July 1, 2012 and has lasted till July 22, 2016. It has been focused on the development and promotion of the Danube region in Serbia. Beside a construction of the water-supply system in Veliko Gradište (value of 4.5 million euros) and reconstruction of Golubac fortress complex, the project also included a programme of donations worth 3.5 million euros used for financing 17 projects, a reviion of 13 big infrastructure projects was made, several hihgly important documents for a development of the Danube region in Serbia were prepared and promotion of this region as an interesting tourist and investment destination.

Among other things, a promotive video by Tourist Organisation of Serbia, «The Danube in Serbia – 588 photos», was also financed through the project and has so far won four very important international awards and recognitions.